In this study, we examined whether the induction of SI mRNA expression during contact inhibition-mediated differentiation of the intestinal cell line Caco-2 is associated with SI gene methylation of histone H3K4 or acetylation of histone H3 at K9/14 and of H4 at K5/8/12/16.

Caco-2 cells, which were purchased from the American Type Culture Collection (Rockville, MD, USA), were seeded in 10-cm collagen-coated culture plates (Iwaki, Tokyo, Japan) at a density of 0.6×104 cells/cm2 with Dulbecco’s modified Eagle’s medium (DMEM) containing 10% fetal calf serum at 37°C in a humidified atmosphere of 5% CO2. Details of the medium have been described previously [25]. Day 0, which was 5 days after plating, was regarded as the day of 100% confluence.

Results are expressed as mean ± standard of the error (SEM). Statistical significance was determined by the Kruskal–Wallis multiple range test and the post hoc Dunn’s test.

First, we investigated whether acetylation of histone H3K9/14 and of histone H4K5/8/12/16, as well as methylation of histone H3K4 induces SI gene transcription and RNA Pol II binding to the SI gene during differentiation in Caco-2 cells. As shown in Figure 1, the SI mRNA level was very low at 100% confluence (day 0). However, it increased with time as it was upregulated 14689- and 75029-fold at days 5 and 10, respectively, compared with day 0. Furthermore, other intestinal differentiation markers showed higher expression on days 5 and 10 than on day 0, including SLC2A5, which is a fructose transporter, ALPI, which is related to digestion of phosphate compounds, and VIL1, which is involved in villus construction. 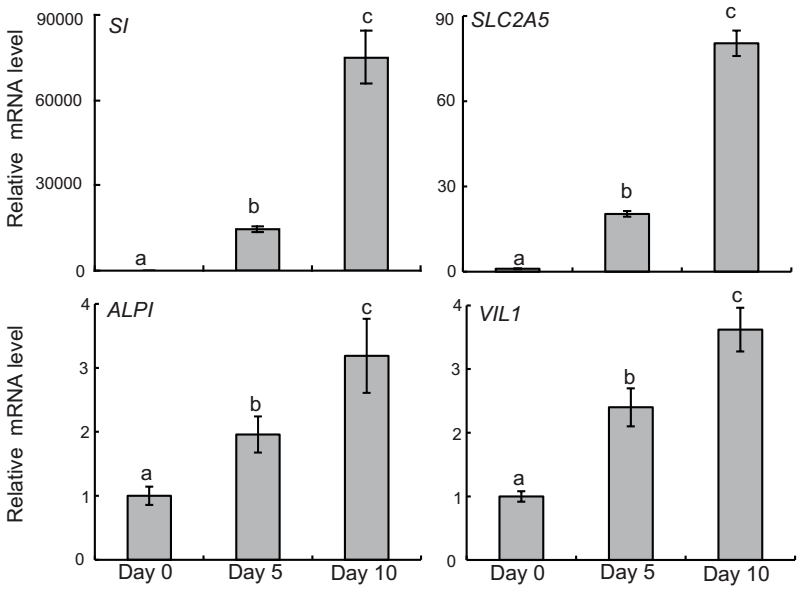 Figure 1 Intestinal gene expression in Caco-2 cells during differentiation. Samples were collected on days 0, 5, and 10 after confluency for qRT-PCR. Results of qRT-PCR were normalized to ACTB mRNA. Values with different superscript letters differ significantly (P < 0.05).

We performed ChIP assays using antibodies for acetylated histone H3K9/14, acetylated histone H4K5/8/12/16, Pol II, and mono/di/trimethylated histone H3K4 to examine whether these histone modifications correlate with the induction of SI mRNA and with Pol II binding to the SI gene during differentiation in Caco-2 cells. The primer positions for the ChIP assays are described in Figure 2A and Figure 3A. The ChIP signals of normal rabbit IgG were under 0.04% per input. The signals for acetylation of histone H3K9/14 at 1100 bp was notably enhanced during differentiation (Figure 2B). The signals of acetylated histone H4K5/8/12/16 were pronouncedly enhanced after confluence between days 0 and 10, particularly in the promoter–enhancer region (–1700 bp to –400 bp) and at 1 bp to 1100 bp (Figure 2C). The bindings of Pol II were markedly enhanced after confluence, particularly in regions close to the transcription initiation site; significant induction was observed between days 0 and 10 between –400 bp and 1 bp (Figure 2D). 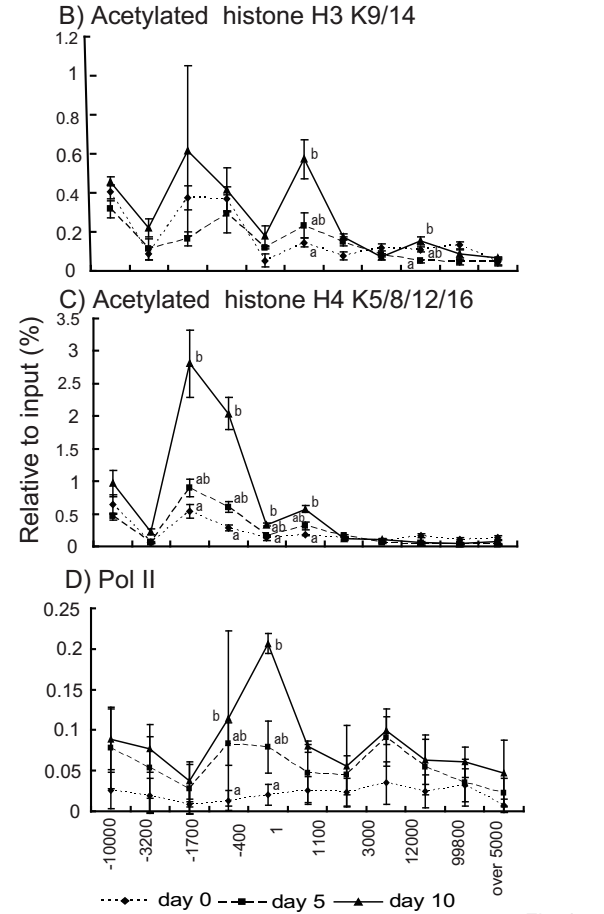 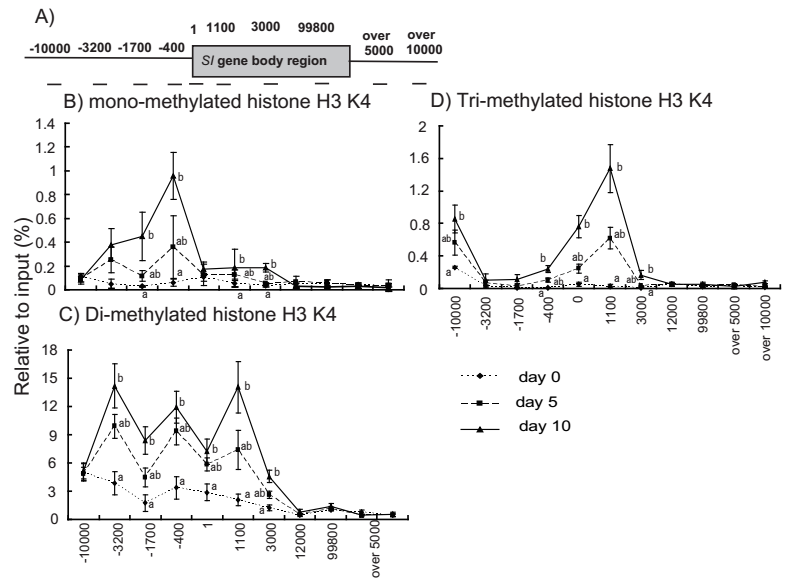 In this study, we showed that SI gene expression was upregulated during differentiation induced by contact inhibition in Caco-2 cells. It has been reported that the SI protein level was not detected before confluence and increased exponentially after confluence in Caco-2 cells [27]. This report is consistent with the SI mRNA levels in Caco-2 cells observed in the current study. Here, we demonstrated that acetylation of histone H3K9/14 within the gene body region and of histone H4K5/8/12/16 in the promoter–enhancer region as well as Pol II binding to the region close to the transcription initiation site of the SI gene were all progressively increased by differentiation. Because the hyperacetylation of histone H3 correlates with the euchromatin region in the genome [12,14,28], our results in this current study suggest that histone acetylation is concerned with SI gene expression during the differentiation of Caco-2 cells and that this acetylation is associated with the induction of the gene in humans. Furthermore, we showed that histone H3 was highly acetylated in the gene body region, although histone H4 was highly acetylated in the promoter–enhancer region. Our previous studies on histone acetylation of the SI gene during postnatal development of rats or while feeding mice a high-starch or fructose diet showed similar results [10,24,29]. Histone acetylation in the gene body region enhances the transcription elongation by recruiting transcription elongation complexes, whereas histone acetylation in the promoter–enhancer region enhances transcription initiation by recruiting mRNA transcription initiation complexes [18,19,20]. Therefore, it is very likely that acetylation of histone H3 and H4 is involved in the regulation of the transcription elongation reaction and of the transcription initiation reaction, respectively.

It should be noted that the mRNA level of the SI gene was pronouncedly higher at day 5 after confluence than at day 0, although the differences of histone modifications and Pol II binding around the SI gene between days 0 and 5 were smaller. The difference may be due to the sensitivity of the ChIP assay. Another possibility is that induction of the SI gene was regulated by other factors including transcriptional factors; transcription of SI mRNA in Caco-2 cells is reportedly induced by several transcription factors such as CDX2, HNF1, and GATA4/5 in the SI promoter region [4,5,6,7]. It should be examined in further studies whether bindings of transcription factors around the SI gene are induced during differentiation of the Caco-2 cells.

In conclusion, we found that histone H3K4 methylation was associated with SI gene induction, Pol II binding, and histone acetylation on the SI gene during differentiation of the human enterocyte-like cell line, Caco-2. We demonstrated for the first time that the modification of histone H3K4 from the promoter–enhancer region to the gene body region of an intestinal gene gradually shifted from mono- to tri-methylation.

We thank Michal Bell, PhD, from Edanz Group (www.edanzediting.com/ac) for editing the English text of a draft of this manuscript.

This work was supported by Grants-in-Aid for Young Scientists (22680054) and for Scientific Research (26282023) from the Ministry of Education, Culture, Sports, Science and Technology (MEXT), and by a grant from The Uehara Memorial Foundation.