Rapid publication: manuscripts are undertaken in 6.8 days from acceptance to publication (median values for papers published in this journal in 2020, 1-2 days of FREE language polishing time is also included in this period).

It is fashionable these days to read of treatment toward endoscopic remission or deep remission in Crohn’s disease (CD) and more recently transmural remission [1] the latter addressing the thickening of the bowel wall as shown by CT. More recently, target to treat is in vogue [2] and the suggestion that pharmaceuticals might address the fibrosis of CD [3]. Current television ads speak of “treatment of the symptoms of Crohn’s disease”.

It’s troubling to read or hear of such treatment options, when, after all, each misses the real target[4], the obstructed intestinal lymphatic vasculature [5,6,7,8,9,10,11]. It’s not a cytokine cascade nor an imbalance of microbiome nor dysregulated immune responses that causes Crohn’s disease. There is, and always has been, lymphatic obstruction – just as sure as there’s a thrombus in myocardial infarction, ischemic stroke or peripheral arterial disease (PAD). It would be ludicrous to treat cardiac fibrosis or the skin and fascial damage of PAD with the intent of resolving a cytokine cascade of some sort. It would be ludicrous to treat cerebral artery or carotid thrombosis as though we had to interrupt or enhance some cytokine irregularity and suppress some immune cells. Yet, that’s what’s done in modern gastroenterology to attempt to resolve Crohn’s disease. [12] We change the immune regulation, and perhaps we give the patient antibiotics or biologics to change the cellular and biochemical traffic. None resolves the irreversibly damaged lymphatic vasculature of Crohn’s disease [11].

The histopathology of resection specimens demonstrates the damaged vessels in the submucosa, muscularis, and serosa, sometimes also in the mucosa. [10] In the latter ascertaining the presence or absence of granulomas detracts from what’s really going on beneath. [10,11] Treatment of the surface is of little more than cosmetic value. Textbook descriptions of Crohn’s disease make no mention of lymphatic disease. Is that because the lymphedema is regarded as secondary and resolvable? It is not; the lymphatic damage is the cause of Crohn’s disease. [9,11] Obstructed lymphatics and lymphedema do not occur in other forms of colitis, where they might be expected to occur if they were only secondary to surface damage. The lymphatic damage is not a consequence of surface penetration; it represents primary elephantiasis [7] – something the early pathologists described (when the lesions were unchanged by steroids, antibiotics or immunosuppressants) [5,6]. Why is there reluctance to accept what great teams of pathologists have described and illustrated?

The pattern of Crohn’s disease is overwhelmingly vascular. If only we had a means to demonstrate the intestinal lymphatic vasculature with contrast media like we do the mesenteric arteries! Unfortunately we don’t have that. Pietro Tonelli recognized the vascular distribution[9]; he, being a surgeon, made us aware of the difference in Crohn’s disease of the jejunum vs that of the ileocolic region, a difference dictated by the mesenteric vascular rete of the respective parts. His illustration, reproduced here [9]  (Figure 1) should appear in every description of Crohn’s disease, along with the words lymphatic obstruction, lymphedema [9] and, most importantly, elephantiasis [7].

In the last 10 to 12 years D2-40 immunolabeling of lymphatic endothelium and anti-CD68 labeling of the granulomas make the obstructions clear, at every level, submucosa, muscularis, and serosa [10,11]. Here we present a montage of obstructed lymphatics, the obstructed intestinal lymphatic vasculature of Crohn’s disease (Figure 2). 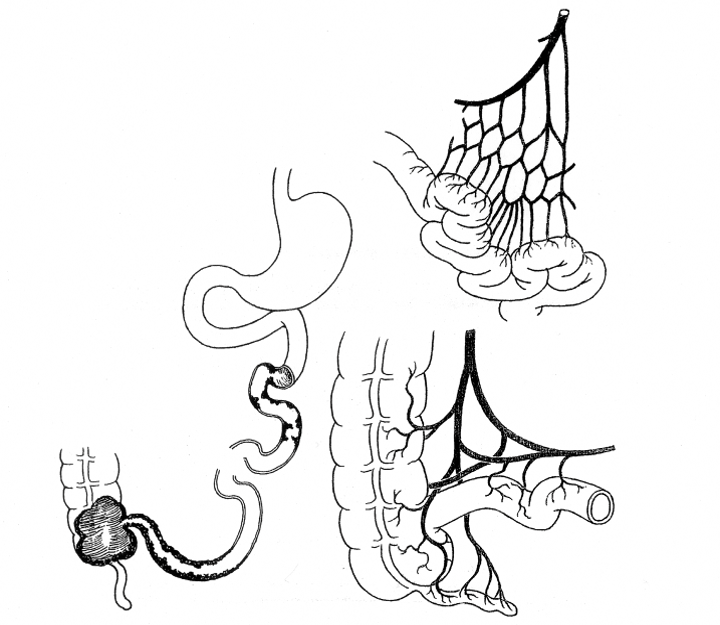 Figure 1  Diagramatic illustration of long segment ileocecal and short segment jejunal Crohn's disease (left) along with representation of the shorter vasa recta of the jejunum and the longer lymphatic collecting ducts of the ileum (right). Short and long segment lymphatics influence the spatial pattern of inflammatory lesions. Reproduced with permission from P. Tonelli [9].

Obstructed lymphatic vasculature also occurs in metastatic Crohn’s disease. [13,14,15,16,17] There is elephantiasis of the part or parts, be they male genitalia, vulva, lips or oral cavity. The obstructed lymphatics shown by Alexakis et al and those before him are identical to those of intestinal Crohn’s disease. [14,15,18] Metastatic CD sometimes precedes, sometimes follows, the intestinal disease. That CD occurs in these locations, where there is no abscessation, fistulas, or microbiome attests to the vascular basis of disease.  For these reasons, metastatic Crohn’s disease may be a better place to define etiopathogenesis.

Del Gaudio recognized the lymphatic defect and attempted to bring new lymphatics to anastomotic sites by wrapping them with omentum. [19] While an admirable idea, expecting that lymphatics would grow from omentum into subserosa, muscularis, and submucosa was perhaps unreasonable, and not very successful.

Perhaps a cutout of our montage should be mounted in the offices of gastroenterologists, similar to the photos of macular degeneration that adorn every ophthalmologist’s exam room. How many obstructed lymphatics will resolve? Will biologics resolve the issue? If surgery is done, will unseen foci of lymphangitis and lymphedema occur in parts left intact, above or below the site of anastomosis? Can we expect that lymphatics will anastomose with one another when the edges of a resection are pulled together? If biologics or immune suppressants kill a few granuloma cells in an obstructed vessel will that have any value? 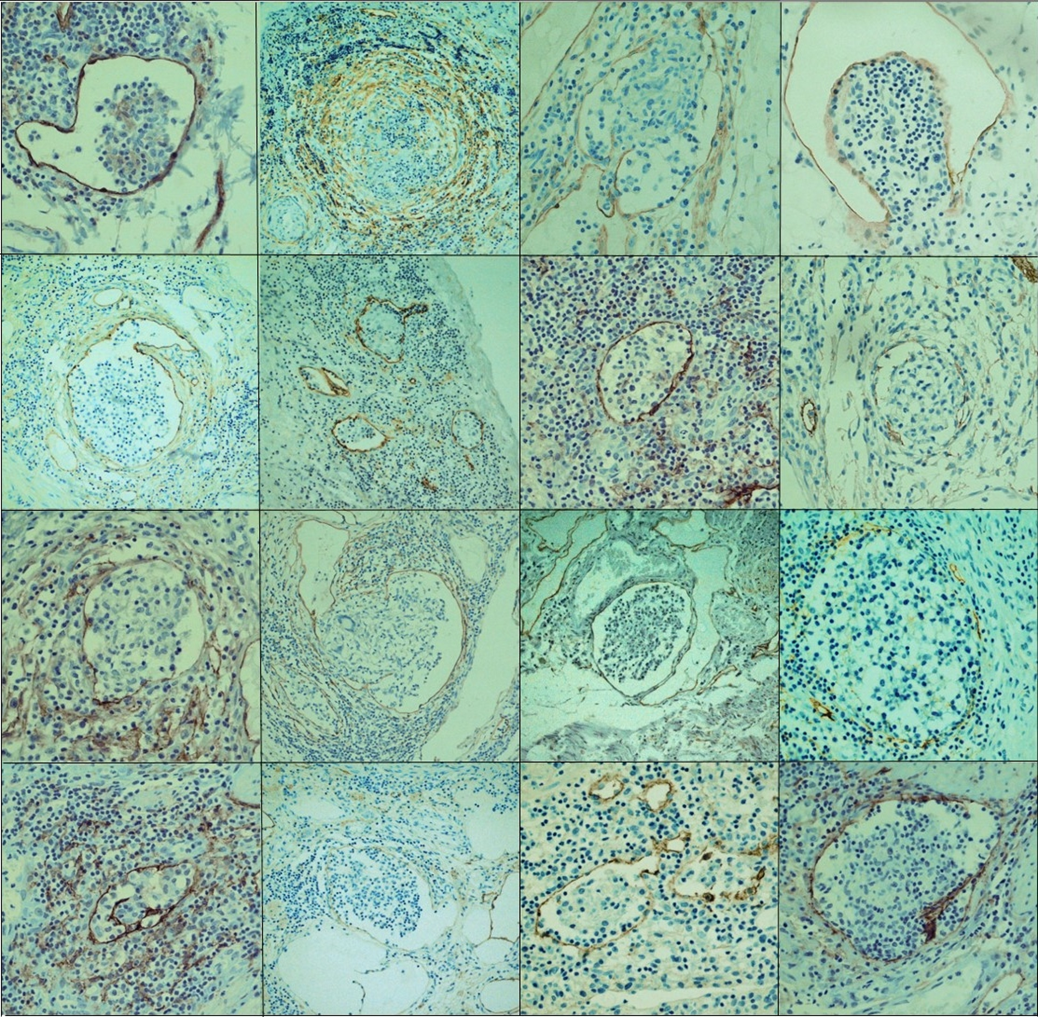 Figure 2 A montage of obstructed lymphatics, from resection specimens of patients with Crohn’s disease. Some stained with haematoxylin and eosin, others immunolabeled with D2-40 antibody to demonstrate lymphatic endothelium. Original magnifications 200 or 400X.

BigPharma might be called upon to create animal models of obstructed lymphatic vasculature, similar to the pig model described recently. [20] Current mouse models do not reproduce the primary lesion of Crohn’s disease; they merely create cell and cytokine inflammatory reaction. [21,22] Endothelial cells can be grown in cell culture and perhaps even grown in tubules. But then, in search of a model system, one would need to induce granulomas within those tubules; not any easy task, but closer to a real model of Crohn’s disease. And, not a model created with beads or caustic chemical agents, as in the past.  It must be added that an in vitro model would not address contractility as in vivo systems would, nor the return of function or lack of it after experimental obstruction and lysis of same.

What are we to do? Presently, we can’t demonstrate obstructed lymphatic vasculature with contrast agents, MRI, US or standard or cross-sectional CT. And, if we could demonstrate them, how would modern medicine (or surgery) respond?  Endoscopists might benefit from sitting with pathologists and seeing the D2-40 labeled lymphatics in resection specimens for themselves; they won’t see them in endoscopic biopsies because biopsies are too superficial. Perhaps Pietro Tonelli can be recognized for having shown us the vascular basis of Crohn’s disease.  Descriptions and lectures might acknowledge that “Crohn’s disease is a segmental elephantiasis of the intestine, and sometimes other body parts”.

The author thanks Dr. Antonio Garmendia for manuscript review and Jeremy Doucette for help with the montage.

HJ Van Kruiningen has been supported by the Broad Medical Research Foundation.

The author declares no financial conflict.