Chronic lung allograft dysfunction (CLAD) is the leading cause of death after the first year and the major factor limiting long-term survival after lung transplantation [1]. The pathogenesis of CLAD remains poorly understood with no known effective therapies. Thus, the identification and study of key risk factors of CLAD pathogenesis is a crucial step toward improving outcomes after lung transplantation. Prior studies have evaluated the association between different infections (e.g. community acquired respiratory virus (CARV) [2,3,4,5], Pseudomonas [6,7,9], Staphyloccous aureus [10], Aspergillus species [11,12,13]) and risk of CLAD development, but the results have not been consistent. These prior studies were limited by evaluation of only one type of pathogen at a time and by differences in patient inclusion due to varying definitions of infection and colonization across studies.

In the current study, we attempted to clearly distinguish between infection and colonization by using a strict definition of infection which required organism detection, patient symptoms and radiographic findings. We hypothesized that a clinically significant infection (organism detection with symptoms and radiographic change) as compared to colonization (organism detection without symptoms or radiographic change) would be a strong predictor of CLAD development, independent of the different causative organisms. We postulate that any infectious pathogen can trigger a deleterious cycle of cell damage due to a Type 1 immune response with recruitment of injurious mononuclear cells into the allograft, furthering cell damage and fibroproliferation resulting in CLAD. Thus, the severity of this deleterious cycle as reflected in clinical symptoms, will be a stronger predictor of CLAD development than the various pathogens that may trigger this process.

CXCL9 is a glutamic acid-leucine-arginine motif negative or ELR- CXC chemokine that signals through a G protein-coupled receptor, CXCR3. This chemokine is induced by interferon-γ, acts as a potent chemoattractant for mononuclear cells (e.g., activated T cells and natural killer cells) and serves as a major effector of the Type I immune response [14,15,16]. Our group has previously demonstrated the role of CXCR3/CXCL9 biology in the pathogenesis of different allograft injury patterns in human lung transplant recipients [14,15,17,18]. In rodent models, our group showed that the persistent elevation of CXCL9 in the allograft led to chronic rejection, while neutralization of CXCL9 attenuated both acute and chronic rejection [14,15]. In clinical studies, we demonstrated the utility of bronchoalveolar lavage fluid (BALF) CXCL9 as a prognostic marker, which allows discrimination of recipients at increased risk of CLAD after both acute rejection (AR) and organizing pneumonia (OP) [18,19]. Importantly, we found that BALF CXCL9 concentrations during AR outperformed the other CXCR3 chemokines, CXCL10 and CXCL11, as a prognostic marker for CLAD development [19]. Respiratory infections share a common theme with the different allograft injury patterns as they all involve the extravasation and infiltration of leukocytes into the area of injury. Thus, we hypothesized that BALF CXCL9 during respiratory infection would be predictive of CLAD risk.

In this study, we sought to formally evaluate the association between respiratory infection and CLAD development, using a strict definition of infection to clearly distinguish between infection and colonization. We hypothesize that a clinically significant infection (organism detection with symptoms and radiographic changes) will be a strong predictor of CLAD development, regardless of the various pathogens which cause the infection. Furthermore, we test a novel hypothesis using BALF CXCL9 concentrations, to quantify the severity of Type 1 immune response during respiratory infections, as a prognostic marker of subsequent CLAD risk.

With IRB approval, we performed a retrospective review of all lung transplant recipients at UCLA between January 1, 2000 and December 31, 2010. Recipients received surveillance bronchoscopies with bronchoalveolar lavage and transbronchial biopsy (TBBX) at 1, 3, 6 and 12 months post-transplant, as well as during episodes of clinical deterioration. Biopsies were interpreted by one of three pulmonary pathologists according to the International Society for Heart and Lung Transplantation criteria (for AR and lymphocytic bronchiolitis (LB)) [20,21] and International Multidisciplinary Consensus Statement on Idiopathic Interstitial Pneumonias (for OP and acute lung injury (ALI)) [22]. Respiratory infection was defined as positive detection of a respiratory pathogen with new clinical symptoms (dyspnea, cough, sputum, fever or fatigue) and CXR or CT scan showing new or worsening infiltrates, consolidations, nodules or cavitation. Bacterial, fungal and mycobacterial pathogens required a positive BALF culture, while viral pathogens were detected by PCR or ELISA. Positive pathogen detection without both new symptoms and radiographic changes was considered colonization. Bronchoscopies with no histopathologic evidence of allograft injury, infection or colonization were considered “healthy”.

Immunosuppression and anti-microbial prophylaxis were administered in accordance with UCLA protocol as previously described [13]. All patients received intra-operative methylprednisolone 7 mg/kg IV, followed by methylprednisolone 125 mg IV every 12 hours for 3 doses. This was followed by prednisone 0.5 mg/kg daily for the first week, then tapered by 5 mgs per week to a maintenance dose of 5-15 mg daily. Patients also received tacrolimus dosed for a 12 hour trough level of 8-12 ng/mL and mycophenolate mofetil 1000 mg bid with dose adjustments based on toxicity. Treatment of infection was by discretion of the treating transplant pulmonologist and included broad empiric antimicrobial coverage which was narrowed depending on the culture sensitivities of the pathogen. Treatment of viral infection included: methylprednisolone, intravenous immunoglobulin (IVIG), oseltamirvir, ribavirin or no treatment depending on the pathogen and clinical status of the patient. Higher grade (grade ≥ A2) AR was treated with methylprednisolone 500 to 1000 mg IV for three days followed by a prednisone taper from 0.5 mg/kg. Minimal AR (grade A1) was treated with a prednisone taper from 0.5 mg/kg without the methylprednisolone pulse. Treatment for ALI and OP was by discretion of the transplant pulmonologist and included: methylprednisolone, IVIG, plasmapheresis, basiliximab, anti-thymocyte globulin (ATG) or no treatment. All patients received serial spirometry on at least a quarterly basis. CLAD was defined as a sustained 20% drop in the forced expiratory volume in 1 second (FEV1) from the average of the two best post-transplant FEV1 measurements [23,24]. With IRB approval, recipients consented to the collection of BALF for research purposes. During the bronchoscopy, three 60 ml aliquots of isotonic saline were instilled into the sub-segmental bronchus in the lingula, right middle lobe or area of interest and pooled. The supernatant was collected and stored unconcentrated at -80° C after centrifugation. BALF CXCL9 concentration was measured using the luminex bead assay (Millipore, Billerica MA). 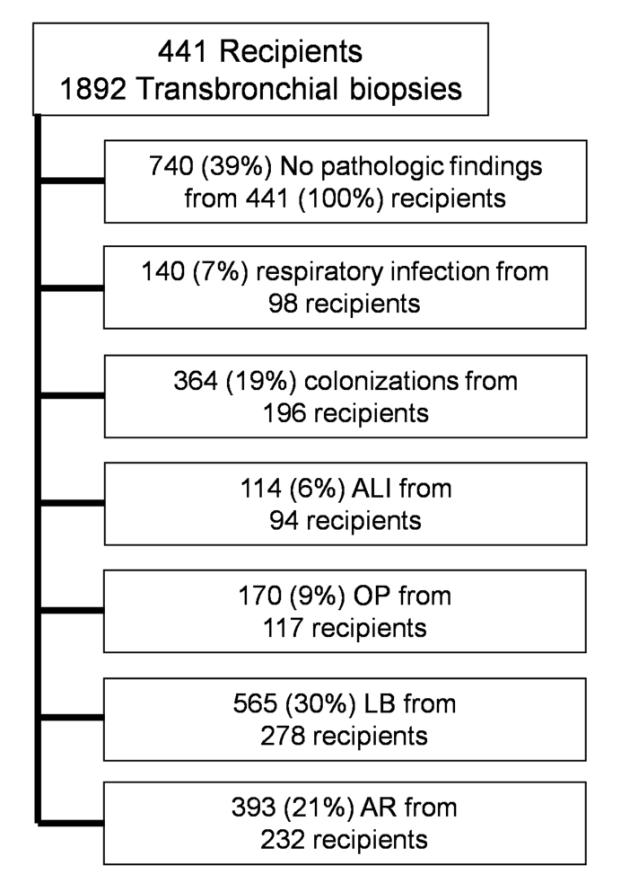 Definition of abbreviations: n= number of samples, % = percent of total number or infections or colonizations. There were both infections and colonizations with multiple organisms detected.

3.1 Risk of CLAD after Respiratory Infection and Colonization

To evaluate the impact of infection and colonization on CLAD risk, Cox models for CLAD were constructed with time-dependent cumulative counts for respiratory infection and colonization, as well as other histopathologic injury patterns (AR, LB, OP and ALI). In univariable analysis, ALI (HR 1.6 95% CI 1.1-2.3), OP (HR 1.6 95% CI 1.1-2.1), AR (HR 1.5 95% CI 1.2-2.0) and infection (HR 2.1 95% CI 1.5-2.9) were all associated with increased CLAD risk (Table 3). Neither LB nor colonization were associated with CLAD development. Variables which predicted CLAD in univariable models (p<0.05) were then entered into the multivariable model. In this multivariable model adjusted for ALI, OP, AR and infection, infection (HR 1.8 95% CI 1.3-2.6) remained a significant predictor of CLAD development (Table 3).

3.3 Impact of BALF CXCL9 During Respiratory Infection on CLAD Risk

Since the pathogenesis of CLAD remains incompletely understood with no known effective therapies, the identification and study of key risks factors for CLAD pathogenesis is a critical step towards improving outcomes after lung transplantation. Prior studies have evaluated the association between respiratory infection and CLAD development, but the results have not been consistent [2,3,6,8,11,13]. These prior studies were limited due to the focus on a single infection type (e.g. community acquired respiratory virus [2,3,5,25], pseudomonas [6,7,8,9], Staph aureus [10], mycobacterium [26], aspergillus species [11,12,13]) and by differences in patient inclusion due to varying definitions of infection and colonization across studies. In this single-center retrospective analysis, we sought to formally evaluate the association between respiratory infection due to any pathogen and CLAD development, using a strict diagnosis of infection requiring pathogen detection with clinical symptoms and radiographic changes. We furthermore test a novel hypothesis regarding the importance of BALF CXCL9 concentration during respiratory infections on CLAD risk.

Prior studies investigating the association between infection and CLAD development have focused on one pathogen type at a time. CARVs have been the most studied pathogen with several studies reporting adjusted HRs for CLAD in the 1.9-2.3 range, when CARV detection is considered without taking into account patient symptoms or radiographic findings [3,5,25]. In our study, clinical symptoms with radiographic changes were important factors in defining episodes of true respiratory infection which led to increased CLAD development. This is also supported by a recent study by our group which showed that clinical severity strongly impacts CLAD risk: CARV pneumonia, defined by viral detection with symptoms and positive radiography was associated with CLAD, while asymptomatic viral infection was not [2].

We attempted to clarify the above discrepancies by using a strict definition of infection which required organism detection, patient symptoms and radiographic findings. We hypothesized that a clinically significant infection as defined by organism detection, symptoms and radiographic changes will be a strong predictor of CLAD development, regardless of the various pathogens which caused the infection. While the underlying mechanisms responsible for the progression from respiratory infection to CLAD is poorly understood, we postulate that any infectious pathogen can trigger a deleterious cycle of cell damage, aberrant Type 1 immune response with recruitment of injurious mononuclear cells to the allograft through CXCR3/CXCL9 biology, causing further cell damage and eventual fibroproliferation that ultimately leads to CLAD. Thus, the severity of this deleterious cycle as reflected in clinical symptoms, should be a better predictor of CLAD development than the type of infectious pathogen which can trigger this process. Sample size considerations did not allow for stratified analysis by infection type using this strict definition of infection, but we find that respiratory infections, irrespective of the causative pathogens, are strong predictors for CLAD development, which outperformed the allograft injury patterns (ALI, OP, LB and AR) in multivariable modeling.

The major limitation of this study is the potential for confounding inherent to retrospective studies. For example, patients with clinical deterioration may have received more frequent bronchoscopies leading to a higher incidence of infections diagnosed. Importantly, given our methodology we only evaluated episodes of respiratory infection (140 episodes from 98 recipients) and colonization (364 episodes from 196 recipients) associated with bronchoscopies, there were undoubtedly many episodes of infection which were diagnosed and treated without bronchoscopy. Multivariable adjustment for all known CLAD risk factors (e.g. primary graft dysfunction, donor specific antibodies, gastroesophageal reflux, BALF neutrophilia / lymphocytosis) and patient specific treatments (e.g. immunosuppression and anti-microbial regimen) was beyond the scope of this analysis. We adjusted the analysis for the histopathologic injury patterns which we find to be strong determinants of CLAD development and associated with elevated BALF CXCL9 concentrations. However, several recent reports have questioned the sensitivity and reliability of biopsy interpretations [28,29]. Finally, stratification by respiratory infection type was limited due to small sample size of respiratory infections with available BALF samples.