Background: The objective of this study was to evaluate the effects of acute moderate-intensity exercise on autobiographical episodic memory and semantic memory.

Methods: A two-arm, parallel-group randomized controlled intervention was employed. The experimental group engaged in an acute bout of treadmill exercise for 15 minutes (70% of heart rate max), while the control group engaged in a time-matched seated activity. For episodic autobiographical memory, participants recalled as many personal memories of events from two periods in their life (childhood and adolescence). For general semantic memory, memory recall from two specific categories (animals and vegetables) were evaluated.

Conclusions: Acute exercise provided some suggestive evidence of increasing the recall of semantic memories (moderate effect size estimates), however, these results did not reach statistical significance. Our Bayesian analyses, however, suggest anecdotal to moderate evidence toward the null hypothesis. Although acute exercise may induce functional responses (e.g., long-term potentiation) that subserve memory function, only chronic exercise is likely going to induce structural brain adaptations that may be needed to preserve long-term memories.

A two-arm, parallel-group randomized controlled intervention was employed. The experimental group engaged in an acute bout of treadmill exercise for 15 minutes, while the control group engaged in a seated activity playing an on-line game. This study was approved by the University of Mississippi’s ethics committee, with participant written consent obtained prior to data collection.

In alignment with other related experiments [1,2,3,4,5,6], 20 participants were randomized into both groups (N=40). Recruitment occurred via a convenience-based, non-probability sampling approach (classroom announcement and word-of-mouth). Participants included undergraduate and graduate students between the ages of 18 and 35 yrs. Participants were given course extra credit for their participation in this study.

Similar to other studies [13], participants were excluded if they:

Exercised within 5 hours of testing [17]

Consumed caffeine within 3 hours of testing [18]

Those randomized to the exercise group engaged in a bout of treadmill exercise for 15 minutes. Participants exercised at approximately 70% of their estimated HRmax (220-age), corresponding to moderate-intensity exercise [22]. Heart rate was monitored throughout the exercise protocol. The speed/incline was manipulated to ensure that the achieved heart rate was within 5 beats per minute of the target heart rate.

Similar to other studies [23], those randomized to the active control group completed a medium-level, on-line administered, Sudoku puzzle for 20-minutes. The website for this puzzle is located here: https://www.websudoku.com/

As evaluated elsewhere [24], episodic autobiographical memory and general semantic memory were evaluated. For the episodic memory assessment, two separate episodic memory tasks were employed. Similarly, for the semantic memory assessment, two separate semantic memory tasks were employed. Thus, in total, we employed four memory tasks, each lasting 90-seconds. Between each task involved a 45-second break. During the 45-second break, participants completed simple arithmetic problems. The order of the categories occurred in a random order. Each task was completed using a paper-and-pencil format (i.e., participants wrote down their responses during the 90-second assessment period).

For each of the memory tasks employed, on a pilot sample of participants, interrater agreement was established by the two authors (ICC > 0.90). Further, any potential uncertainties that the researcher (S.D.) had when scoring the data (e.g., whether a particular item was a vegetable or fruit) was addressed by consulting the senior author (P.L.). Consensus was reached on all occasions.

As a measure of habitual physical activity behavior, participants completed the Physical Activity Vital Signs Questionnaire, which reported time spent per week in moderate-to-vigorous physical activity (MVPA) [25]. Height/weight (BMI) were directly measured (via Seca stadiometer and scale) to provide anthropometric characteristics of the sample. Further, before, during and after the exercise and control conditions, heart rate (chest-strapped Polar monitor, F1 model) was assessed.

Table 1 displays the characteristics of the sample. Participants, on average, were 20 years, with the sample predominately female (80%, exercise group; 70%, control group) and non-Hispanic white (70% in both groups).

Table 2 Physiological responses to the exercise and control protocols.

Table 2 Physiological responses to the exercise and control protocols. 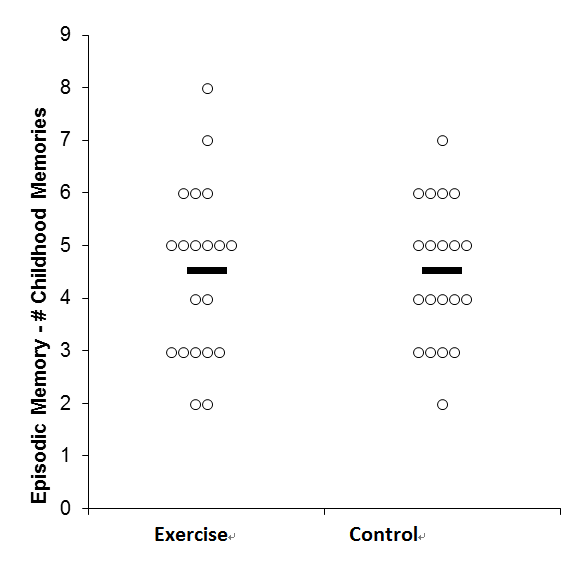 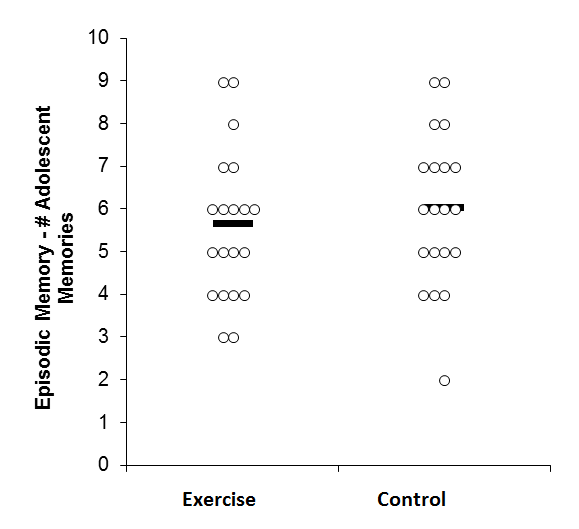 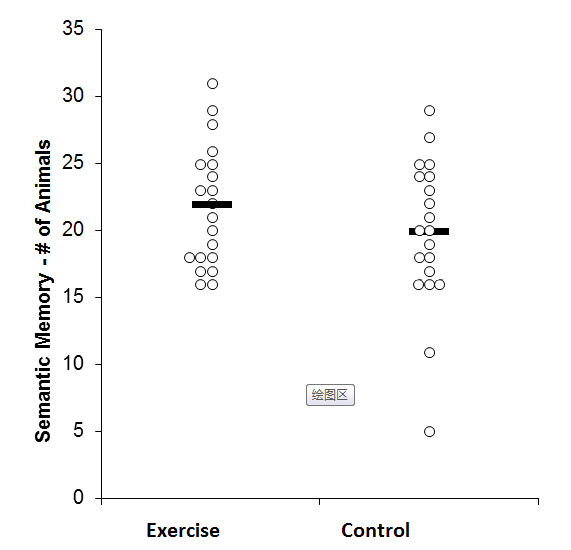 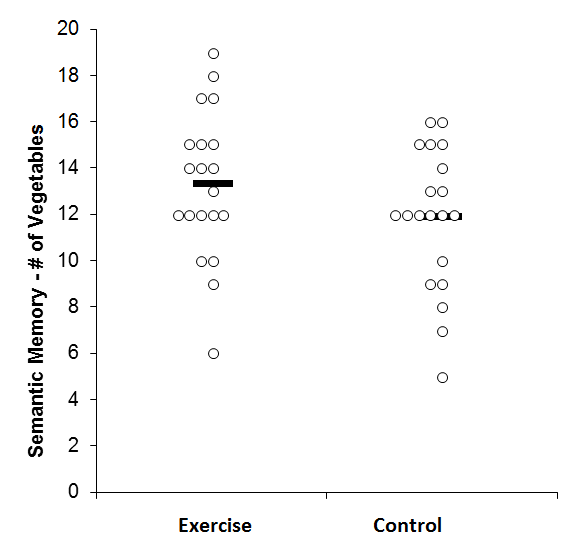 Building off previous work that has examined the effects of acute exercise on non-autobiographical episodic memory, the present study evaluated whether acute moderate-intensity exercise was associated with improvements in autobiographical episodic memory and semantic memory. Our results do not provide convincing evidence of any such effect; however, our results hint toward a possible enhancement effect of general semantic memory with acute exercise engagement. Our Bayesian analyses, however, suggest anecdotal to moderate evidence toward the null hypothesis.

As we have discussed recently [11], limited research has evaluated the effects of exercise on semantic memory. No previous study has evaluated the effects of acute exercise on semantic memory (which the present study did). However, recent work by Smith et al. [28] showed that, after a 12-week walking intervention among older adults, neuronal processing of semantic memories become more efficient. It is thought that exercise may facilitate semantic memory neuronal processing through alterations in cerebral blood perfusion, thereby improving the blood-oxygen level fMRI signal and associated network efficiency [11]. This, in theory, could influence outcomes (e.g., number of information recalled) of semantic memory. Our null findings for autobiographical episodic memory, in particular, may have been a result of a potential floor effect, as the majority of participants were only able to recall a few episodic memories from their childhood and adolescent years. Although we used the same assessment duration (i.e., 90-sec) as previous work [24], future studies may wish to lengthen this assessment period as well as evaluate more proximal autobiographic episodic memories (e.g., autobiographic memories in the past 3-5 years).

A limitation of this study includes the relatively small, homogenous sample. Future work should consider a broader population, as well as employ a high-intensity exercise protocol [29]. Further, we did not measure the participant’s affective state, which, potentially, could influence the ability to recall specific memories, as opposed to overgeneral memories, as instructed by the task. Notable strengths of this study include the novel investigation and experimental methodology.

In conclusion, acute exercise was not associated with autobiographic episodic memory, but there was some suggestive evidence of increasing the recall of semantic memories (moderate effect size estimates); however, these results did not reach statistical significance. Our Bayesian analyses, however, suggest anecdotal to moderate evidence toward the null hypothesis. Given the novelty of this paradigm, future work on this topic is warranted. Such work should consider employing a within-subject design, as individual differences are the greatest source of variance in between-subject designs [30]. However, such within-subject designs will need to be carefully designed to ensure that the different semantic tasks (e.g., vegetables, animals) across the visits are of equal difficulty. Further, an interesting area to consider would be whether exercise modality has a unique effect on autobiographic episodic and semantic memory, as there is some evidence to suggest a beneficial effect of, for example, resistance exercise on memory function [31,32]. Our current findings suggest that acute exercise is not sufficient to enhance autobiographic episodic and semantic memory. As such, future work on this topic should consider evaluating the effects of chronic exercise on autobiographical episodic and semantic memory. Although acute exercise may induce functional responses (e.g., long-term potentiation) that subserve memory function, only chronic exercise is likely going to induce structural brain adaptations that may be needed to preserve long-term memories [33].