Advances in Chemical Research (ACR) is an international peer-reviewed Open Access journal published quarterly online by LIDSEN Publishing Inc. This periodical is devoted to publishing high-quality papers that describe the most significant and cutting-edge research in all areas of chemistry.

As well as reflecting the traditional core subjects of analytical, inorganic, organic and physical chemistry, the journal also features a broad range of chemical research in areas including, but not limited to, catalysis, computational and theoretical, environmental, green , medicinal, nuclear, polymer, supramolecular and surface chemistry. Other cross-disciplinary topics, such as bioinorganic, bio-organic, organometallic and physical–organic chemistry, will also be featured.

Rapid publication: manuscripts are undertaken in 8 days from acceptance to publication (median values for papers published in this journal in  2020, 1-2 days of FREE language polishing time is also included in this period).

The Cambridge Structural Database, or CSD [1], has 100 examples of μ-peroxo di-cobalt compounds with a wide variety of different ligands. Of these, five crystallize in Sohncke space groups and all are disordered to different degrees. Moreover, the referenced set contains eighteen examples of (μ2-hydroxo)(μ2-peroxo) complexes, none of which crystallize in a Sohncke space group.

Bernal [2] studied complex cations of the type [(NH3)5Co-O-O-Co(NH3)5]5+, as prepared by Werner [3] and Werner & Mylius [4], who postulated that the above formula implies two different cobalt ions with valences of +3 and +4 and a (μ-peroxo)(O22-) bridge system; however, other structures can be imagined where the two cobalt ions are +3 each and the two oxygen atoms are forming a μ-superoxo (O2-) bridge system, which is a free radical. Given the results of the esr experiment [2], it is quite reasonable to suggest that the relevant O-O moiety should be classified as a superoxide bridge, given the observed g-value of 2.025 which is typical of free radicals. This observation should be contrasted with the values normally associated with a variety of relevant, paramagnetic, cobalt complexes that Collman [5] discussed in detail (see especially Table 2 [5]).

In retrospect, it is remarkable that despite the fact that the theory of Coordination Chemistry was enunciated in 1893, at which time there were considerable misgivings as to its validity, Werner had a very good grasp of what the chemical composition of the complexes were no matter what their proper electronic descriptions were, for such formulations were completely beyond the chemical theories of those days. Interestingly, dinuclear cobalt complexes were under investigation by Fremy as early as 1852 [6]. Several of these substances have been, and still are, rather controversial because the precise assignment of the nature of the O-O bridge is debatable, particularly those that are paramagnetic. (Readers are referred to a paper by Spingler [7] which gives a very thorough and compact history up through that time). Finally, note that since the year 2000, the structures of 52 μ-peroxo-dicobalt compounds have been determined, of which 9 contain also an additional OH bridge, i.e., [GUVSIZ, HULXES, MANYIM, PIVGIM, PIVGOS, RUCJUW, RUVJUO, UMIJEH, XAWWEA (CSD, [1]). Given the colors described for these complexes (orange, red, green, brown, black), this suggests that each of them requires detailed studies by a variety of techniques for proper formulation, because of the electronic changes introduced by the broad range of the ligands surrounding the cobalt species.

All the chemicals were of analytical reagent grade and were obtained from Sigma Aldrich, Fisher Scientific or VWR, and used without purification.

2.1 Synthesis of the Metal Complexes

Synthesis of the precursor [cis-Cl2Co(III)(tren)]Cl·H2O:

The first precursor cis-dinitro(tris-2-amino(ethylamine))cobalt(III) chloride, [cis-(NO2)2Co(tren)]Cl, was prepared following the process of Uprety [8]. A crystal from this preparation was mounted on the X-ray diffractometer and the cell dimensions were determined to match the existing material. Then this material was used to prepare the 2nd precursor, cis-dichloro(tris-2-amino(ethylamine))cobalt(III) chloride hydrate, [cis-Cl2Co(tren)]Cl·H2O, by adding 30% HCl to the previous complex, again following the preparation of Uprety [8]. To verify we had the desired starting material, we determined the space group and cell constants of this material and found that the structure was known and in the CSD [1] as LIHPIE.

A suitable crystal of (1) was mounted on a Bruker-AXS SMART APEX II CCD diffractometer at 100(1)K. Cell dimensions and intensities were all collected with CuKα radiation (λ = 1.54178 Å). Data processing, Lorentz-polarization, and face-indexed numerical absorption corrections were performed using SAINT, APEX, and SADABS computer programs [9,10,11,12,13] (see Table 1). The structure was solved by direct methods and refined by full-matrix least-squares methods on F2, using the SHELXTL program package. All non-hydrogen atoms were refined anisotropically. All H atoms were found in electron-density difference maps and allowed to ride on their respective C, N or O atoms. The methylene H atoms were then placed in geometrically idealized positions and constrained to ride on their parent C atoms with C—H distances of 0.99 Å; the N—H distances were fixed at 0.86 Å and the O—H distances were fixed at 0.84 Å. All of the above had Uiso(H)= 1.2Ueq(C) or 1.2Ueq(N) and Uiso(H) = 1.5Ueq(O). The crystallographic data have been deposited with the Cambridge Crystallographic Data Center. The deposition number for (1) is: 1977410 for the 100K structure.

Compound (1): The structure was solved to yield a di-cobalt(III)(tren) species connected together by μ2-hydroxo-1 and μ2-peroxo2- bridges. There are three (I3-) counterions as required by electro-neutrality, and two waters of crystallization (see Figure 1). Details of the structure of the μ-hydroxo-μ-peroxo complex (1) are presented in Table 1.

As mentioned above, the addition of NH4I to a solution of the precursor was intended to provide the simple iodide salt of the cis-dichloro(tren) species. Given our unexpected result, and in an effort to determine the origin of the peroxide, we reacted the same starting materials while purging all of the solutions continuously with dry N2 gas. The results of this experiment are that the color of the solution, after heating as above, remained a visible purple color (still under N2 atmosphere), and not the wine-red color observed previously after heating. When the solution was then exposed to air with stirring and heating, it turned wine-red within two to three minutes, indicating that it had incorporated O2 from the air. Equally good-quality crystals of (1) were obtained from this preparation, sharing the same space group and cell constants as those of (1), and shown in Figure 1. Thus, it seems reasonable to postulate that the reaction in this case is a simple redox reaction wherein I- is oxidized to I2 (and thence to form the I3- anion), while air O2 is reduced to the peroxide anion O22-, generating the observed bridged structure. 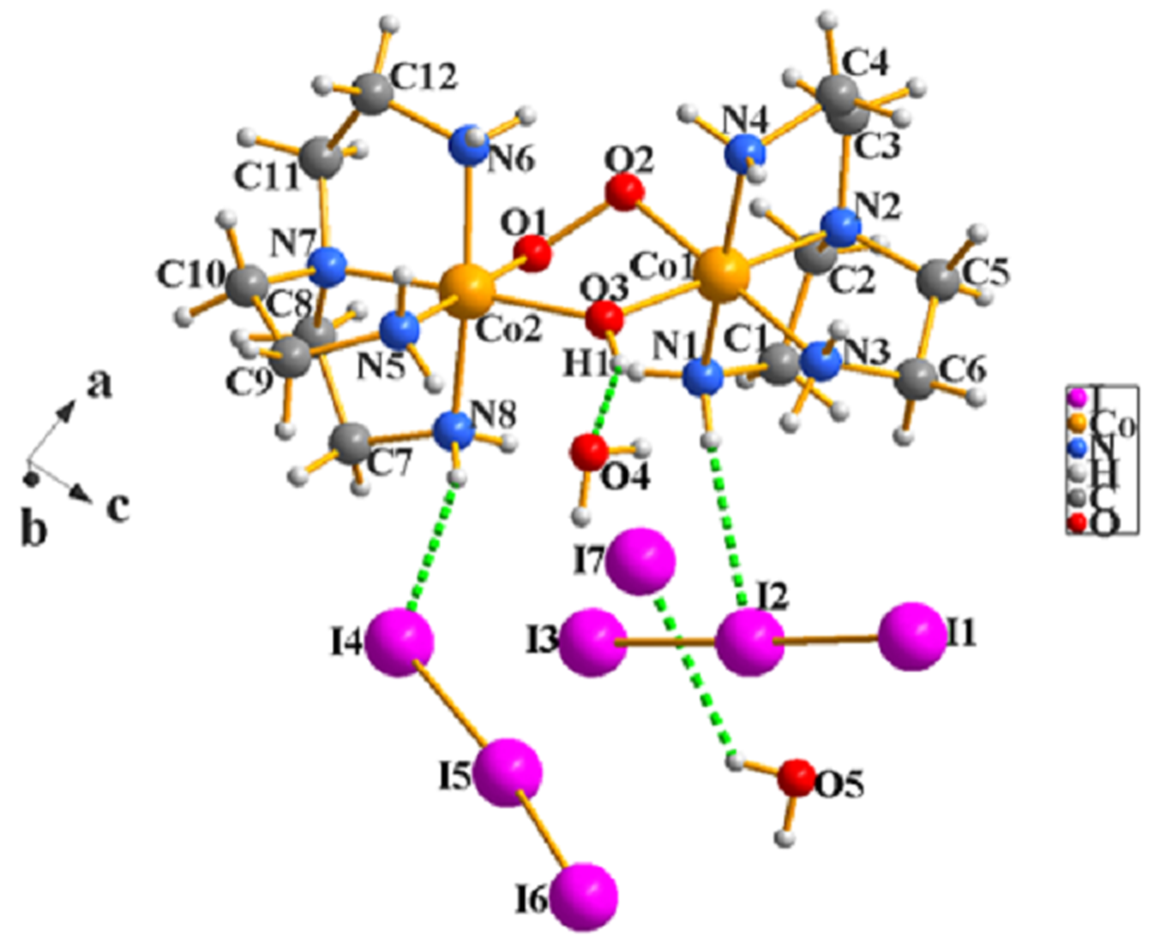 Figure 1 The conglomerate μ2-hydroxo-1 μ2-peroxo2- trenCo complex is shown here. The two trenCo moieties do not match in their absolute configurations. The entire cation is at a general position of the Sohncke space group P212121. For an overlay of the left and right trenCo moieties, see Figure 2 below. 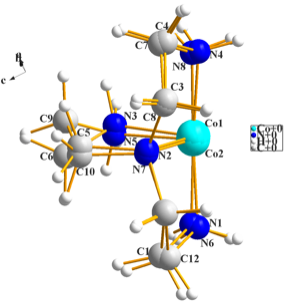 Above, we present the structure of a di-μ-bridged di-cobalt compound (1) which was heretofore unknown. Interestingly, while we initially obtained this di-cobalt complex (1) by an unexpected route, we describe a second, rational method of preparing it under a dry N2 atmosphere, and then exposing it to air to produce the exact same material. In either case, the procedures described above are reproducible.

From the time the μ-peroxo compounds were initially discovered, it has been a challenge to determine how they are formed. Thus, mechanistically, and thermodynamically, our study provides some clues as to how this can be achieved by someone equipped to do fast kinetics as a function of temperature; i.e., (a) The μ-hydroxo-μ-peroxo product has been isolated in solid form. It can be spectroscopically characterized. The tri-iodide is well known that way already. Suitable, non-interfering wavelengths and extinction coefficients can be identified to follow the reactions. (b) The reaction products can then be followed at different temperatures, AND, (c) from the temperature dependence of those reactions, the rate laws and thermodynamic constants (ΔH, etc., values) can be determined.

We demonstrated that the reaction proceeds in a stepwise manner since oxygen can be introduced at the end, independently, and the product is the same. Therefore, the above spectroscopic methodology can be used to follow the kinetics, etc., of this last step and may be observed independently. Such studies would be of great value as biological models, since similar Co-O2 interactions occur in living systems.

Finally, note that the kinetics of the disappearance of the precursor of the final product can also be followed and those data correlated with the formation of the μ–hydroxo-μ-peroxo complex obtained above.

We acknowledge the National Science Foundation for NSF-CRIF Grant No. 0443538 for part of the purchase of the X-ray diffractometer. 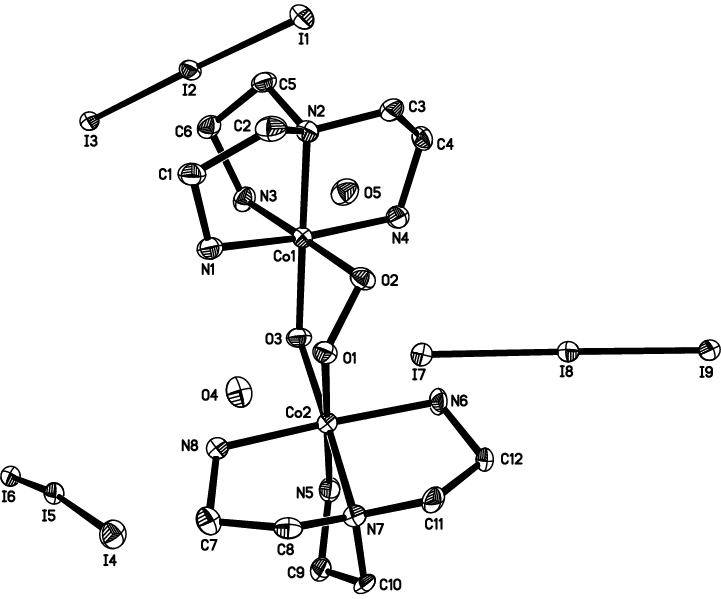 To receive the table of contents of newly released issues of Advances in Chemical Research, add your e-mail address in the box below, and click on subscribe.