The people working in nuclear power plants are mostly exposed to long-term exposure with low doses of ionizing radiation. These doses cannot lead to deterministic effects but can cause stochastic health consequences as a result of cell modification and subsequent cellular transformation.

Cytogenetic monitoring of nuclear power plant (NPP) workers is of great interest for better understanding the effects of low doses of ionizing radiation. Many authors reported an increased level of chromosomal aberrations among radiation workers occupationally exposed in the nuclear industry compared to control population [1,2,3,4,5,6].

When assessing low-dose radiation effects, it is important to introduce sensitive biological methods to evaluate cellular response. There is a need for suitable biomarkers that have the capability to be very specific for radiation. Cytogenetic analysis for dicentrics and translocations has been used widely for screening or biomonitoring of radiation workers, although their application has some drawbacks. The analysis of chromosome aberrations is time consuming and requires skilled microscopists examining many metaphases. Therefore, scoring of micronuclei (MN) in peripheral blood lymphocytes is an alternative method for detecting radiation exposure [7,8,9,10]. The cytokinesis-block micronucleus assay (CBMN) is faster, needs less experience and is applicable for extensive studies [11].

The main disadvantage of the CBMN assay for applying in the low-dose range of ionizing radiation is its restricted sensitivity. This is due to a higher and more varied MN spontaneous frequency [12].

By applying fluorescence in situ hybridization with DNA probes that bind specifically to the centromeric regions of the chromosomes [13,14,15,16,17], we can detect the presence or absence of a centromere signal in peripheral blood lymphocytes. Thus, we can increase the sensitivity of the MN assay.

In the present study, we carried out a cytogenetic study in a group of NPP workers occupationally exposed to low doses of ionizing radiation using the micronucleus-centromere assay. An age-matched group of administrative staff, with yearly doses below 1 mSv, served as reference control group.

To investigate the damage of low dose chronic exposure, a group of 32 NPP workers occupationally exposed to ionizing radiation was investigated by using micronucleus centromere assay. The accumulated dose was calculated during the person’s entire working time at the nuclear power plant with personal dosimeters. The control population consists of 17 not exposed persons from administrative staff. The data collected from both investigated and control groups contain information about age and smoking habit. Absence of previous X-ray examinations in last three months was determined for both groups. Most of the investigated employees are males - 30 and 2 females, in age range 33-60 (47 mean age) for whole group.

The cytochalasine B method in lymphocytes has been introduced by Fenech [7] and described in detail. In present study, heparinized blood samples were collected by venipuncture (9 ml blood in sterile vacutainers). Within the first 24 after blood sampling, cultures, in the presence of Phytohaemagglutinin (Gibco by life technologies) as mitogen, were initiated and incubated for 44 hours at 37°C. Then, Cytochalasine B (Sigma) was added at concentration 6µg/ml to block cytokinesis. After an incubation period of 72 h, the cells were collected and fixed by standard procedure. The dropped slides were stored at -20°C before in situ hybridization with the centromeric DNA probe.

2.3. In Situ Hybridization with the Centromeric DNA Probe

In situ hybridization was performed according to the protocol described by Pinkel et al [18]. FITC labeled DNA human pancentromeric probe (Cambio, UK) was used. The slides were incubated with two antibodies (rabbit anti-FITC and FITC goat-anti rabbit immunoglobulin) for detection of hybridization signal. The fluorescent dye 4’,6-Diamidine-2’-phenylindole dihydrochloride (DAPI, Sigma) in anti-fade solution was used to counter-stain the DNA. The hybridized probe appears as yellow spots. Depending on the presence of fluorescent signals in MN, they were defined as centromere positive (MNCM ) or centromere negative (MNCM−).

In the FISH study, MN were examined for the presence of centromeres under an Olympus BX41 microscope with 1000x magnification. The MN frequencies were scored according to the criteria set by Fenech [19]. Between 1000 and 2000 binucleated cells were scored per individual by two independent investigators. The results are expressed as the total number of MN, MNCM and MNCM− per 1000 binucleated (BN) cells. Data from all investigated groups, as well as, influence of age, accumulated dose and smoking habit were estimated by IBM SPSS Statistics 19. Nonparametric methods of statistical analysis, Mann-Whitney Test and Spearman’s correlation, were applied.

Before blood collection, an informed consent was obtained from all donors. Peripheral blood samples were collected by venipuncture in heparinized tubes during the periodic medical examination.

Data on the number of MN, MNCM and MNCM– per 1000 binucleated cells for the controls and the workers with different accumulated doses are presented together with the number of investigated subjects in Table 1. Values of the same indicators, obtained by subdivision of smokers and non-smokers, are also included. Within the brackets are represented the values of the standard deviations.

The average number of MN in the group of workers is 18.80 (9.40) with a range of 8 to 41 MN per 1000 binucleated cells. The increased frequency of detected MN in NPP workers is statistically significant compared with the control group (p = 0.001,) and it is mainly due to an enhanced number of MNCM–.

When compared with the control group, workers with accumulated doses <200 mSv showed significant increase of MN and MNCM– frequency (p=0.02 and p=0.035 respectively), but not for MNCM frequency (p=0.07). Workers with accumulated doses >200 mSv showed a statistically significant elevation in MN, MNCM and MNCM– frequency (p = 0.002, p=0.01 and p=0.002 respectively) in compare with controls.

In the group of workers with doses >200 mSv, there was a tendency of enhancement in the frequency of MN compared to the workers with doses <200 mSv. The difference is insignificant and is due to an enhanced number of MNCM– (Fig3).

There is no influence of the age on the studied indicators in the observed groups. For the control group, the Spearman’s coefficient of correlation was r=0.2, r=0.2 and r=0.16 for the MN, MNCM and MNCM- respectively. In workers group the Spearman’s coefficient was r=0.19, r=0.11 and r=0.26 respectively for the same indicators. The lack of correlation coincide with observed data in the Bulgarian control population [20]. 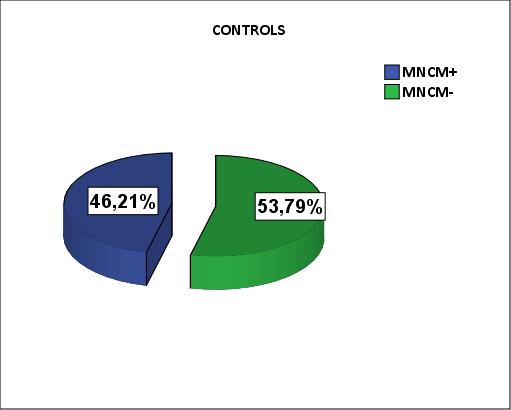 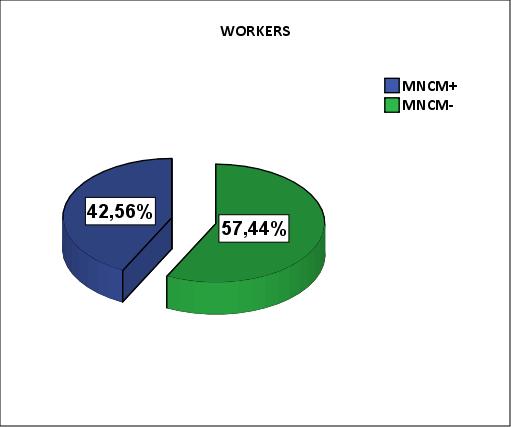 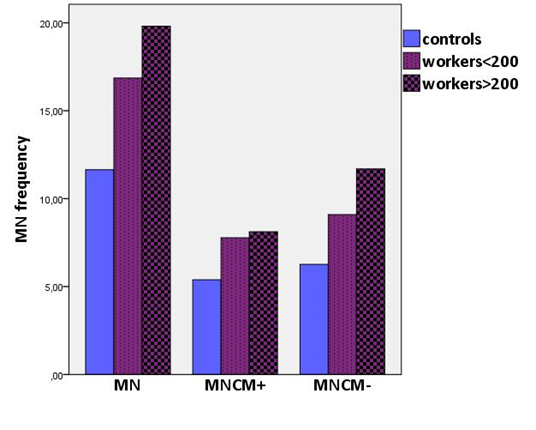 Figure 3 Comparison of MN, MNCM and MNCM– frequencies per 1000 BN cells for the groups of controls and workers with accumulated doses <200 mSv and >200 mSv.

Table 1 Comparison of the mean number of MN, MNCM and MNCM– per 1000 binucleated cells between the exposed and control population.

The occupational exposure of NPP workers is a prolonged exposure to low doses and low dose rates. Cytogenetic monitoring of occupationally exposed individuals in nuclear industry showed an enhanced frequency of chromosomal aberrations, although annually received doses are lower than the limited values [1,2,3,26,27]. All of these authors reported an increased frequency of chromosomal damage in persons working in nuclear power plants, nuclear submarines, uranium mining and radioactive waste repositories, although the accumulated doses were less than the dose limit of 50 mSv per year for radiation workers during the cited studies. These studies indicate that nuclear industry is associated with some mutagenic risk.

In some cases, there is a relationship between the intended effect and the accumulated dose, as well as, its relationship to additional harmful factors. There is an effect of age, gender, diet and lifestyle on micronucleus frequency in human peripheral blood lymphocytes [28]. In our study, we observed no correlation between the number of MN, MNCM , MNCM- per 1000 BN cells and ageing, which is probably due to the small number of subjects studied in each group. No influence of the tobacco smoking on the studied indicators was found. The results of the impact of smoking on the MN frequency in various studies are controversial [29]. The correlation between the yield of MN and gender was not performed because of the small number of females in each group (two females in workers group and one in controls).

Application of micronucleus-centromere assay let us differentiate between centromere-positive and –negative MN [30].

The studied subjects in the present work are employees in the only nuclear power plant in Bulgaria – “Kozloduy”, which is situated on the North Bulgarian border on the Danube riverbank.

Personal occupational exposure to ionizing radiation is under regular control. Irradiation of the examined group in this study is mainly external, and mainly γ-radiation, with a negligible exposure to β-radiation and neutrons. Individual doses are measured monthly by film and thermoluminescent dosimeters.

The personal doses in the group under study were accumulated during a period of 10 to 40 years. Average length of entire working time in the group with doses <200mSv is 19.8 years, which is significantly less when compared with workers with doses >200 mSv – 26 years (p=0.02).

The results obtained showed a significant increase in the frequency of MN in peripheral blood lymphocytes of exposed workers compared to controls from the administrative staff. When we compared the MNCM and MNCM– frequencies between the control and worker groups according the accumulated doses, the most susceptible increase with the dose received was observed in the incidence of MNCM–. This elevated centromere-negative micronucleus yield is responsible for the enhanced frequency of MN with accumulated dose, pointing to the clastogenic action of ionizing radiation.

Accumulated doses in the workers group are in a broad range of 46.87 - 722.96 mSv. However, doses received by workers are mainly in the range of 200 to 400 mSv. Only 16% of the subjects surveyed have accumulated doses above 400 mSv. This, as well as, the small number of subjects, does not allow for a correct tracking of the effect of the dose.

When compared with the control group, workers with accumulated doses up to 200 mSv showed no statistically significant increase in MNCM frequency (p=0,07), whereas difference in the number of MNCM–per 1000 BN cells between mentioned groups is statistically significant. The observed enhancement in the frequency of MNCM– points to the possible clastogenic effect of ionizing radiation. Thus, for biomonitoring or screening of large groups of workers exposed to low dosesof ionizing radiation, the application of the MN-centromere assay is suitable as the frequency of MNCM-is more useful marker instead of the total number of MN, which are non-specific for radiation exposure.