Rapid publication: manuscripts are undertaken in 15.0 days from acceptance to publication (median values for papers published in this journal in the second half of 2021, 1-2 days of FREE language polishing time is also included in this period).

After being established in 1967, the commercially available murine Leydig cell tumor line I-10 has been used in almost 50 published studies. I-10 has not been characterized, either at the chromosomal/ cytogenetic level or the genetic level, similar to many other murine tumor cell lines. In this study, we performed molecular karyotyping and multicolor banding-based molecular cytogenetics. A slightly hyperdiploid karyotype with 43 chromosomes was described. The main aberrations comprised several unbalanced translocations and three unusual rearrangements (two dicentric derivatives and one neocentric derivative). Nine regions showed copy number gains, and only five small chromosomal parts showed loss of copy numbers. A standardized translation of these imbalances in the human genome was performed, which showed a 63% overlap of the detected imbalances with testicular germ cell tumors, a 53% concordance with human spermatocytic seminomas and non-seminomas, and only a 36% overlap (approx.) of large copy number gains and losses were similar to the corresponding human Leydig cell tumors. However, no Y-chromosome was detected in this male-derived cell line. Overall, the I-10 cell line was found to be a testicular germ cell tumor model and cannot be treated as a model that is specific to human Leydig cell tumors. At best, it might be suited as a model for an early onset of Leydig cell tumors.

Leydig cell tumors (LCTs) in males are a kind of testicular mass that might lead to hormonal changes in up to a quarter of the cases [1,2]. Although LCTs are rare, they are still the most common non-germ cell testicular tumors that cause adult feminization and premature childhood masculinization [1,2]; they might cause gynecomastia or infertility. All childhood LCTs and ~90% of adult cases are benign. However, 10% of adult LCTs become malignant and often metastasize before diagnosis. Orchidectomy is the primary treatment option, but in most cases, hormonal changes remain unaffected. As identifying a malignant subset of LCTs is difficult at the early stages, cellular models are necessary for conducting more directed fundamental research to identify genetic markers and facilitate the development of treatment options [1,2].

Interestingly, there has been only one murine LCT model available since 1967, which is the lutropin receptor-deficient cell line I-10 [3]. It was established from a testicular interstitial tumor, i.e., from the LCT-transplant H10119, which was introduced into a monolayer culture and injected into a BALB/cJ mouse. Using the single-cell plating approach, the I-10 cell line was established from the third culture passage [3]. Although available for around 55 years [4], I-10 has been used in only 45 studies. This might be because I-10 has not been characterized genetically, either at the chromosome level or at the DNA level.

To provide information regarding the genetic characteristics of I-10, we performed the first comprehensive cytogenomic characterization of cell line I-10 by performing murine multicolor banding (mcb), molecular karyotyping, and in silico translation of the obtained results into the human genome (as previously described [5]). We found that I-10 has only ~36% similarity with the imbalance patterns of LCTs but has 68% concordance with the imbalance patterns of testicular germ cell tumors.

After purchasing and directly cultivating the adherent murine I-10 cells following the manufacturer’s instructions (American Type Culture Collection, ATCCR CCL83™; Wesel Germany), the cells were prepared in parallel cytogenetically to obtain the chromosomes and genetically to extract the whole genomic DNA [5]. The cell line was not used in any other studies by the authors of this study, and ATCC confirmed the identity of the cell line.

Imbalances and breakpoints of I-10, based on the mcb and CMA data, were aligned to the human homologous regions using Ensembl and the UCSC Genome Browser, as previously described [5]. The data were compared to genetic changes known from human LCTs [6,7], seminomas, non-seminomas, and testicular germ cell tumors [8,9,10,11,12].

According to the ethics committee (medical faculty) and the Animal Experimentation Commission of the Friedrich Schiller University, there are no ethical agreements necessary for studies involving murine tumor cell lines, such as I-10. 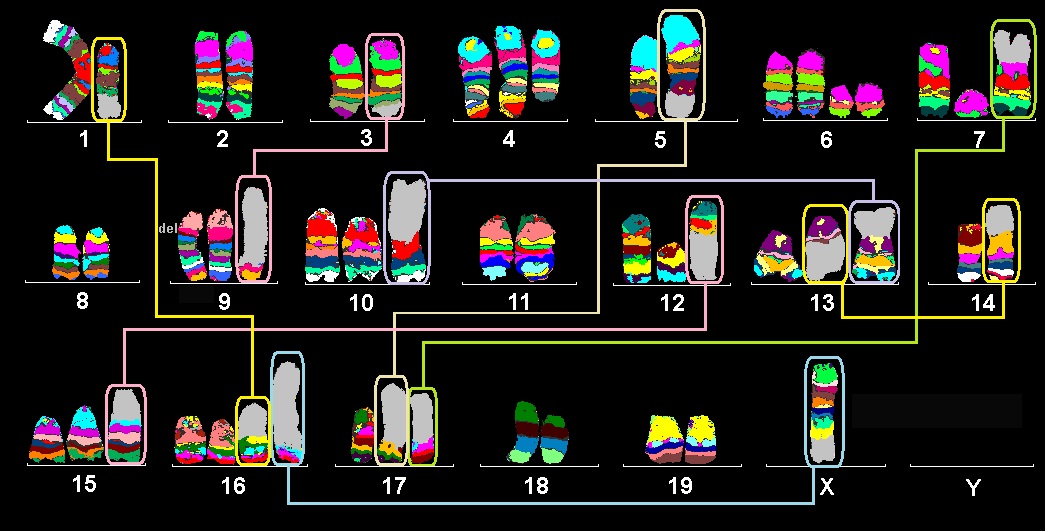 Aberration-induced chromosomal imbalances were relatively rare (13) relative to 16 derivative chromosomes. The main aberrations were unbalanced translocations; one such aberration led to the formation of unbalanced translocations of chromosomes 12 and 15 and a neocentric derivative of chromosome 12. Also, a more simple dicentric as dic(7;17)(A;A), and a more complex dicentric as dic(10;13)(10qter->10C1::10A3->10A1::13A1->13qter) were found to be stable aberrations in this cell line.

The results of CMA for I-10 are summarized in Figure 2A. The imbalances detected in murine cell line I-10 (Figure 2A) were translated into the human genome (Figure 2B and Table 1); this enabled us to compare I-10 imbalances to such in human LCTs; we identified a ~36% overlap of the detected alterations (Table 2). Additionally, 63% and 53% concordance of imbalances were detected with testicular germ cell tumors and human spermatocytic seminomas and non-seminomas (Table 2). No Y-chromosome was detected in 50 correspondingly analyzed metaphases using X and Y-specific BAC probes. However, one (derivative) X-chromosome was detectable in all cells (results not shown). 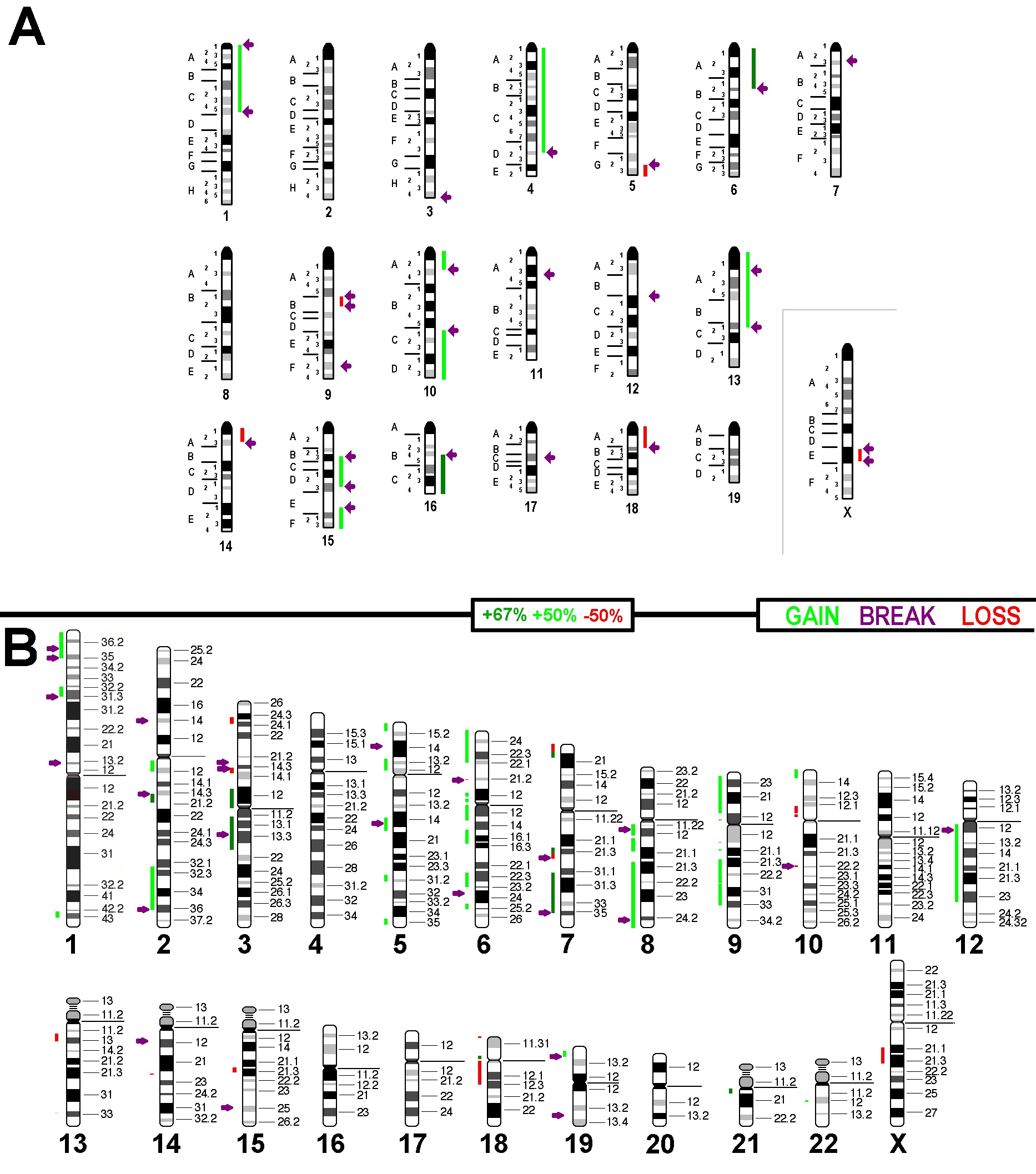 Table 1 The detailed results of murine CMA and translation to the human genome.

Table 1 The detailed results of murine CMA and translation to the human genome.

Table 2 The copy number changes associated with molecular subtypes of human LCTs and seminomas, according to previous studies [6,7,8,9,10,11,12], compared to the copy number variants (CNVs) in cell line I-10. Concordances with human CNVs are highlighted in bold.

Table 2 The copy number changes associated with molecular subtypes of human LCTs and seminomas, according to previous studies [6,7,8,9,10,11,12], compared to the copy number variants (CNVs) in cell line I-10. Concordances with human CNVs are highlighted in bold.

The first cytogenomic characterization of the tumor cell line I-10 revealed a slightly hyperdiploid karyotype of 43 chromosomes, with relatively few imbalances and breakpoints for a cell line that is in cell culture for around 55 years. Interestingly, I-10 is a tumor cell line with dicentric chromosomes, which are normally considered to be unstable [5,13,14,15,16,17,18,19,20,21,22,23,24,25]. It is one of the few cell lines with a stable neocentric chromosome [20,21]. Murine multicolor banding (mcb), along with CMA, enabled a detailed characterization of numerical and structural changes in the I-10 cell line. This study highlighted the importance of understanding the ploidy grade, the individual chromosome numbers, and the rearrangements involved before using a cell line in further, more sophisticated experiments. Data on these parameters might allow well-informed studies to be performed. According to this study, I-10 is not a suitable model to be used for knockout studies of genes located in regions that are present in three copies in this cell line; this refers to murine chromosome 4A-D2, 6A-B2, 7A1-A3, 10A1-A3, and 10C1-qter.

Here, a comparison of translated I-10-specific imbalances was performed, similar to that performed for other murine cell lines [5,13,14,15,16,17,18,19,20,21,22,23,24,25]. Sequencing analyses might also be fruitful in the future, as subtype-specific differences in somatic mutations were found in testicular germ cell tumors [31,32]. Clear differences in the mutation patterns between seminomas and non-seminomas were found [31,32]. However, chromosomal imbalances in both subtypes were similar [8,9,10,11]. Thus, only considering copy number alterations summrized in this study (Table 2), seminomas and non-seminomas could be regarded as one group in common.

Regarding the gains and losses present in I-10, the highest concordance of 63% was for human testicular germ cell tumors, while the lowest concordance of ~36% was for human LCTs. No overrepresentation of sequences homologous to the short arm of chromosome 12 could be found in I-10, which might be related to the invasive growth of human testicular seminomas and non-seminomas [33]. This indicated that I-10 might be used as a model for early-onset LCT. However, it might also be used as a testicular germ cell tumor model.

The I-10 cell line is more suited as a model for human testicular germ cell tumors rather than for LCTs in particular. However, I-10 should not be used for studying metastasizing LCTs or testicular tumors. Moreover, studies on gene expression and approaches to introduce or remove gene copies need to consider the specific copy number alterations in this diploid tumor cell line.