© 2017 by the authors. This is an open access article distributed under the conditions of the Creative Commons by Attribution License, which permits unrestricted use, distribution, and reproduction in any medium or format, provided the original work is correctly cited.

The treatment by auricular therapy has a long history. Ear acupoint research has been advancing step by step worldwide [1,2,3,4,5,6,7,8,9,10,11,12,13,14,15,16,17] . The introduction of lasers into medicine brought besides the already existing stimulation with needles, electricity, pressure and liquids an additional technique to auricular acupuncture.

The RAC (Reflex Auriculo-Cardiac) represents an important scientific method in the field of auricular medicine. At the TCM Research Center of the Medical University of Graz, new methodological strategies for recording and objectifying the dynamic pulse changes were scientifically investigated and described. With high-resolution imaging of pulsatile surface changes, the RAC can be reproducibly quantified for the first time. One of the methods consists of a combination of an innovative microscope system of the Medical University of Graz, a video software analysis and special image processing programs of the Beijing University of Science and Technology. First test measurements document the realization of the new method approach (Figure 1 and 2).

Figure 1 Quantification of the RAC (modified from [7]).

Figure 2 Proof of the dynamic changes in the laboratory using alterations at the surface (modified from [7]).

Auricular medicine has come of age and has gained the attention of the wider medical community in recent years. 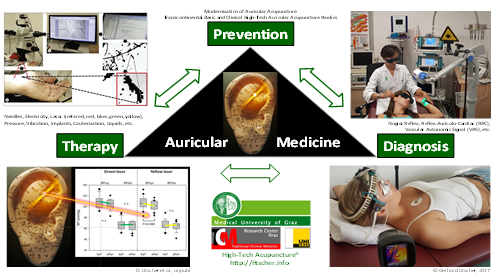 The studies were supported by the Austrian Ministry of Science, Research and Economy (BMWFW) and the German Academy of Acupuncture (DAA).