Given the prevalence of malnutrition in the hospital setting, it is important to identify surrogate biochemical and clinical markers in order to quickly recognize and intervene [1]. Pediatric malnutrition is defined as “an imbalance between nutrient requirement and intake, resulting in cumulative deficits of energy, protein, or micronutrients that may negatively affect growth, development, and other relevant outcomes” and chronic malnutrition is defined as present for 3 months or longer [2]. For children, commonly used indicators of malnutrition include anthropometric markers such as BMI, weight-for-length, weight-for-age, height-for-age, and birth weight [3]. Other indicators include clinical markers such as weight loss, weight gain, or food intake [4]. Physical exam findings such as muscle wasting and adipose tissue distribution are also commonly used to determine nutritional status [5]. Another anthropometric parameter that is widely used in pediatrics is the head circumference [6]. However, it is more commonly used as a marker of development, while its use as a nutritional indicator has been limited.

One of the main limitations of using nationally representative growth charts is that the proportion of malnutrition in the general population is smaller than that of hospitalized patients. For example, common measures of malnutrition in children under five years of age such as stunting (low height-for-age) and wasting, (low weight-for-height) correspond to 3.5% and 0.4% respectively in the United States’ population [13]. In contrast, the prevalence of malnutrition in the pediatric intensive care unit (PICU) has been found to be 24-53% in countries of various levels of economic development based on different anthropometric measurements [14]. Therefore, it is important to study the relationship between head circumference measurement and chronic malnutrition in the context of PICU admission.

Parents or legal guardians had already provided their informed consent to participate in the parent study. We received approval to conduct this ancillary study involving human subjects by the Children’s Wisconsin institutional review board (IRB).

We studied the statistical relationship between head circumference and other parameters that were obtained in the nutrition screen study. These parameters include prematurity, gestational age, demographic data, and nutritional status. The nutritional status was determined by a registered dietitian using the Subjective Global Nutritional Assessment (SGNA), which has been validated in the pediatric critical care population as a measure of nutritional status [15]. The SGNA takes into account a nutrition-focused medical history, which includes dietary intake, clinical symptoms, and weight changes, and a physical exam that measures subcutaneous fat, muscle wasting, and nutrition-related edema. The detailed methodology has been published for a precise reproduction of this assessment tool [5].

Figure 1 Age distribution of all participants. The frequency is shown for each age group of four contiguous months. 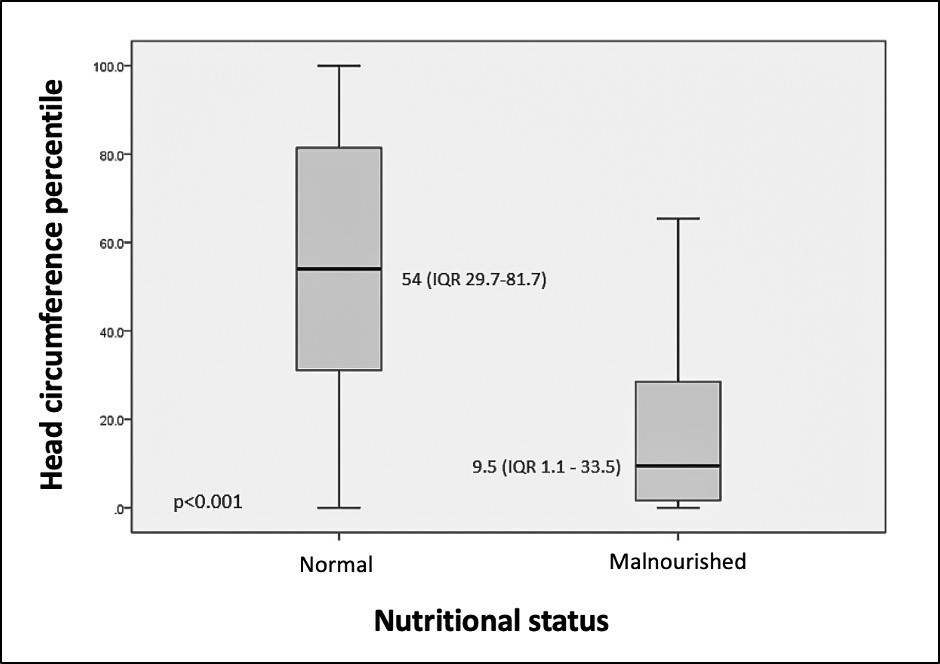 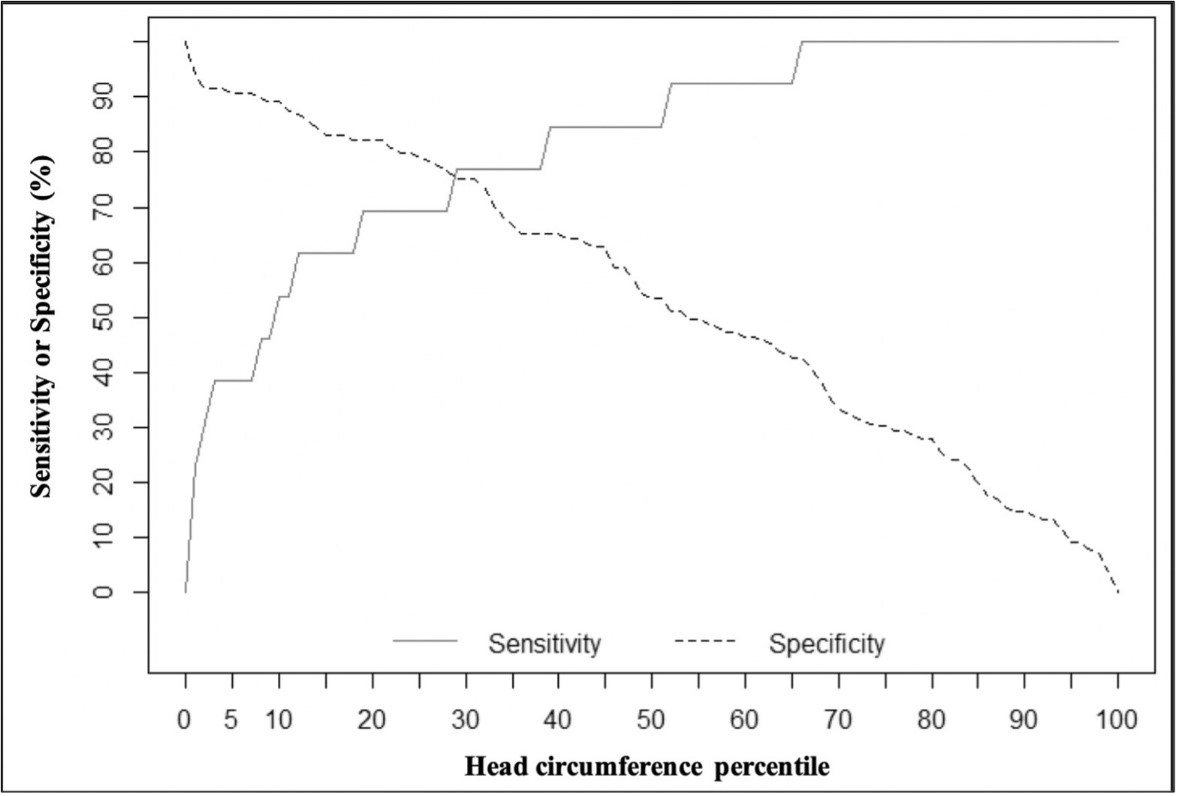 Given the significant association, it is possible to use head circumference to identify chronic malnutrition in critically ill children. A screening tool that detects malnutrition allows us to prioritize these patients for early nutritional intervention. Therefore, it is preferred to have a screening tool with high sensitivity because it is ultimately better to treat falsely detected malnourished patients than delay intervention when a malnourished patient is missed. Using only our study population, an ideal cutoff point for head circumference percentile would be between 30 and 35, given that at this range, sensitivity is greater than specificity, and it is below the interquartile range for patients with normal nutritional status.

One of the major limitations of our study is the small sample size. Although we obtained statistically significant results, these might only be representative of our cohort. Other limitations are related to the retrospective nature of our study. These include the possibility of increased confounding factors, which were addressed by multivariate analysis, and the inability to establish causation, although the association that we found should be sufficient for the purpose of creating a screening tool.

Another limitation of our study is the wide variety of diagnoses, particularly chronic illnesses that are present in the pediatric intensive care unit population. Some of these are a direct cause of malnutrition, which would result in a smaller head circumference. Some other chronic illnesses, however, may result in a smaller head circumference despite normal nutrition and could contribute to a decreased accuracy in our measurements.

There are other anthropometric parameters, such as weight for height and mid-upper arm circumference, that are commonly used as part of the WHO standards [17] to assess for malnutrition. However, these tools are for children up to 5 years of age and they are focused on acute malnutrition, with very limited studies on chronic malnutrition. Furthermore, recent studies have shown that coupling these measurements together failed to recognize severe confounding factors such as edema [18]. Our study adds another data point for the development of a multifactorial screening tool that is also more specific to critically ill children under 2 years of age.

In this study we elucidated a significant difference between the head circumference of patients with chronic malnutrition and patients with normal nutrition status. With this foundation, the next step would be to validate our findings in a larger, prospective study in order to confidently determine a cutoff point that can be used to screen patients for malnutrition in the PICU. Head circumference percentile should also be used in conjunction with other significant anthropometric and clinical parameters to create a more effective nutrition screening tool.