Complementary and alternative medicine (CAM) is an important feature of patient medical history. This study sought to investigate the perceptions of medical students at Touro College of Osteopathic Medicine in Harlem, New York (TouroCOM-NY) regarding Asian-origin CAM practices. An anonymous survey was distributed to first and second year TouroCOM-NY medical students, asking about their familiarity with, and general attitude towards, five categories of Asian-origin CAM (acupuncture, reiki, tai chi, Ayurveda, and use of non-mineral/vitamin substances) 107 students responded from the first-and second-year class at TouroCOM-NY in 2018, with an 84% response rate. Demographics were equally distributed between genders and were predominantly of Asian or Caucasian origin (mirroring that of the institution). 59% indicated no knowledge of 2 or more of the CAM practices listed; 41% indicated no knowledge of 3 or more. Only 20% indicated practice of at least one of the listed CAM and noted strong familiarity. This survey demonstrated significant knowledge gaps and attitudes for Asian-origin CAM practices that can be addressed by curriculum change in undergraduate medical education.

Complementary and alternative medicine (CAM) is an important feature of patient medical history, especially because of the wide range of therapies that it encompasses and the large number of Americans who report using it. Broadly, CAM is often used to describe medical and health practices that are traditionally not included under the umbrella of Western medicine [1]. While typically grouped together, complementary medicine specifically refers to practices that are done in addition to standard treatments which differs with alternative medicine in which the practice is done in place of standard/mainstream accepted care [2]. Physician attitudes, or perceived physician attitudes, towards CAM can disrupt doctor-patient communication and trust, leading to dangerous gaps in patient history [3,4,5,6,7]. Many of the most used CAM practices in the United States, including acupuncture, Ayurveda, reiki, and yoga, originate from Asian countries and cultural beliefs [8]. These Asian-origin CAM practices might be subject to unique physician biases due to a lack of knowledge about Asian traditions or misrepresentation of Asian traditions in American media.

This study aims to evaluate first-and second-year medical students’ knowledge and perception of Asian-origin CAM. An anonymous survey was distributed to first and second year TouroCOM-NY medical students, asking about their familiarity with, and general attitude towards, five categories of Asian-origin CAM. The five categories were chosen by selecting the five most used Asian-origin CAM from the 2008 National Health Statistics Report, except for yoga, due to yoga’s more widespread use as a form of entertainment and exercise [8]. Results from this study could help to characterize biases regarding CAM and guide medical educators on how to prevent gaps in cultural competency from interfering in future patient care.

First and second year medical students at an osteopathic medical school (Touro College of Osteopathic Medicine) in New York were recruited to participate in this survey. Participants were informed, both verbally and with the inclusion of a cover letter that participation was voluntary. To eliminate bias, no identifiers were collected to protect the anonymity of participants. Study size was determined by number of first-and second-year medical students (n = 130). Minors, those who did not demonstrate complete understanding of the basis of the survey, and those who were unable to give informed consent were omitted from this study. Third-and fourth-year medical students were also not included due to convenience sampling and lack of presence during survey distribution.

A validated eleven-question mixed multiple-choice and dichotomous (yes/no) survey was developed specifically for this study to measure familiarity and general attitudes towards the five chosen most used Asian-origin CAM practices: acupuncture, Ayurveda, reiki, taichi, and non-vitamin/mineral-based food products. The survey was done in English and included questions regarding demographics (age, gender, education level), prior knowledge of the different CAM practices, opinions of the effect of CAM on health, perception on the population who take part in CAM practices, and their interest in learning more about CAM.

Recruitment of participants occurred via convenience sampling during didactics at TouroCOM. No additional inclusion criteria were identified prior to subject selection. All subjects were invited to participate. No other specific recruitment methodologies were utilized. No financial compensation or other incentive was provided to participants who voluntarily took the survey. Collection occurred over five consecutive days, September 1 through September 5, 2020.

Survey data were scanned, and a data spreadsheet was electronically created using a licensed version of Microsoft Excel, version 2016 (Microsoft Corporation, Redmond, WA, USA). The data was subsequently coded for statistical analysis. Group comparisons were completed using Pearson’s chi-squared tests (χ2 tests) of independence to determine statistical significance and correlation such as demographics relative to the various survey parameters. Statistical analysis was performed using the release version 16.0 of STATA in addition to 16.1 update of STATA [9].

This study was approved by the Touro College Health Sciences Institutional Review Board for the Protection of Human Subjects (HSIRB #2043E).

Amongst respondents, the racial breakdowns were those who identify as Caucasian (39%), Asian (38%), Black/African American (10%), Latinx (6%), Middle Eastern (3%), and Other/Prefer not to disclose (4%). This is a similar distribution to published demographics for TouroCOM. The response rate for the 2 classes was an average of 84% (n = 107) of the total class size (n = 130). No significant correlation between ethnicity, gender, or first/second year undergraduate year to familiarity with Asian-origin CAM was noted (χ2 = 0.51, 0.63, and 0.42 respectively). 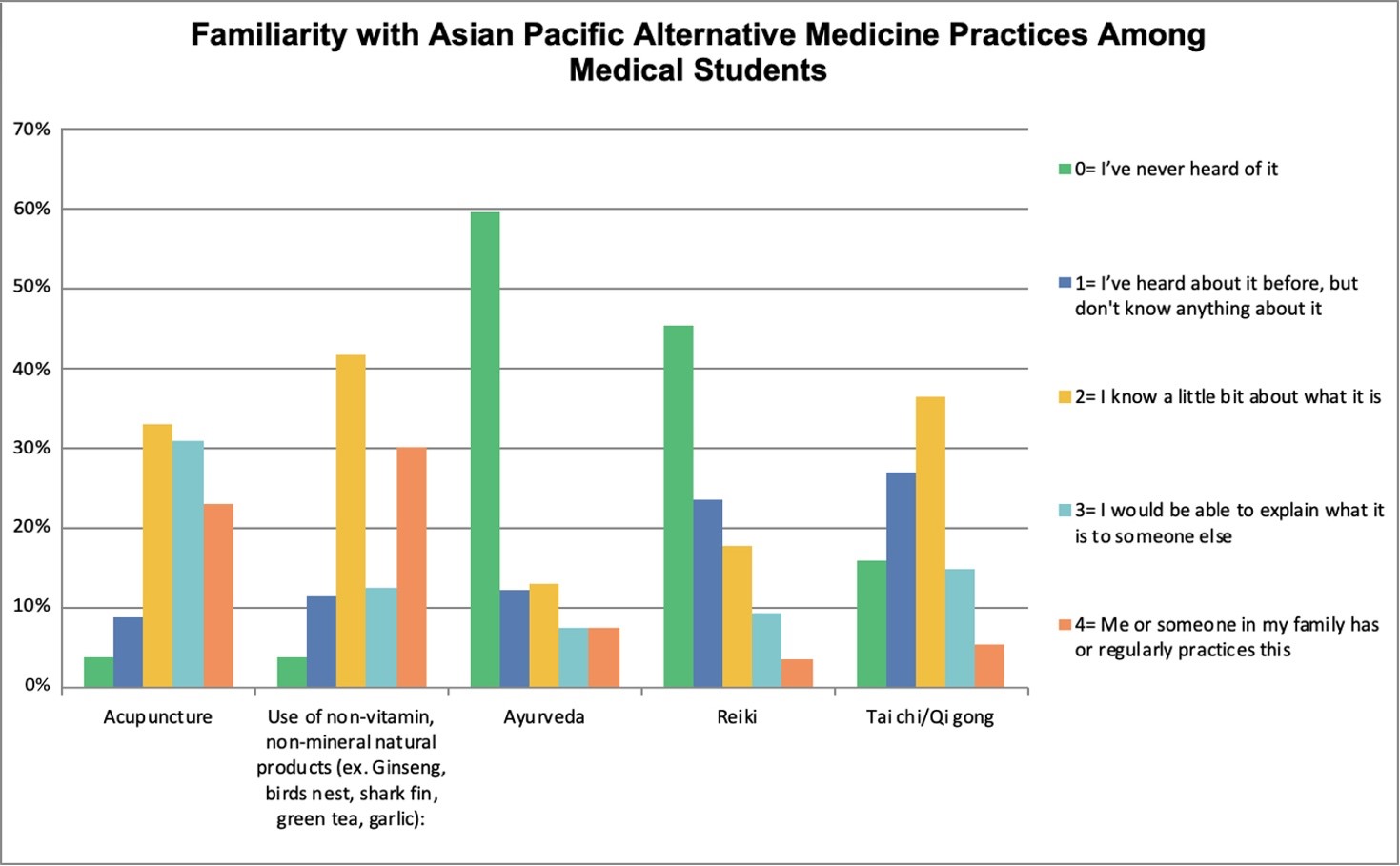 Overall, over 70% of participants believed that acupuncture and dietary CAM were beneficial for patient health while over 50% believed the same of Tai chi/Qi gong. Similar to previous familiarity data, most responders were not familiar with Ayurveda and reiki (Figure 2). In comparison, when queried on whether patients using CAM were less likely to adhere to Western medicine-based treatment plans, 39% of respondents agreed, 24% disagreed, and 37% did not have a strong opinion on the statement. 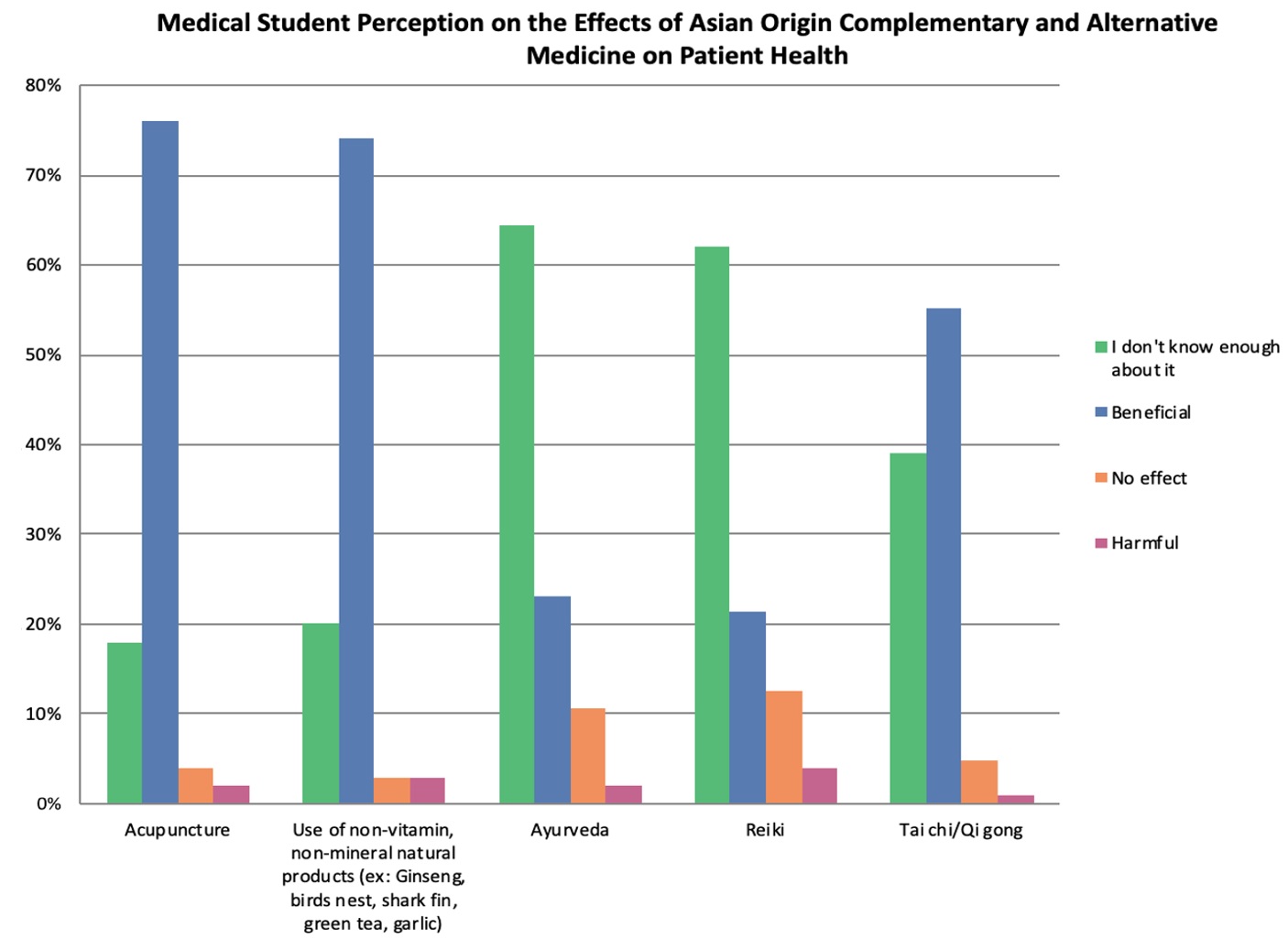 Figure 2 Graphic depiction of perception on the effects of Asian-origin CAM on patient health among surveyed undergraduate medical students. Key in graph.

The data demonstrated unfamiliarity in general with CAM practices for undergraduate medical students, which can be an area of concern as patients have been shown to embrace these practices, particularly in communities of color. As a juxtaposition, patients in communities of color are typically unaware of osteopathic medicine in which the undergraduate medical students practice, despite multiple levels of overlap between osteopathic medicine and Asian-origin/non-Asian origin CAM treatments [10,11,12]. For example, multiple massage techniques share roots and pathophysiology with osteopathic techniques, in which making these connections could be critical in physician prescribing or referral practices, as well as in building rapport with patients [13]. For many of the undergraduate medical students, it would not be erroneous to extrapolate that they may have also had exposure to Asian-origin/non-Asian origin CAM treatments through their cultural upbringing, however, would be challenged to incorporate this into their educational schemas as Western medicine typically devalues treatments that are not based in single-molecule, biochemical explanations [14]. This is supported through the disparate distribution of responses when considering whether patients who used CAM were less likely to adhere to a Western treatment plan and whether CAM are truly beneficial for a patient’s overall health [15].

Ayurvedic medicine and reiki represented two Asian-origin CAM practices of which undergraduate medical students at TouroCOM had minimal knowledge. Practiced in the Indian subcontinent and Nepal, Ayurvedic medicine encompasses a variety of beliefs and treatments that intertwine dietary considerations, meditation, yoga and others to promote rebalancing of the body for homeostasis [16]. Practiced by lay and professional practitioners since the 4th century, research has produced mixed results on its applicability and efficacy [17,18] . In comparison, Reiki therapy is a Japanese CAM that manipulates energy fields from the practitioner to the patient, which can similarly realign and affect body homeostasis [19]. Branded as pseudoscience, Ayurvedic medicine and reiki are just two examples of CAM practices that are disregarded by Western medicine, given the inability to correlate reproducible results to purported claims [20]. In doing so, however, this can create knowledge biases and deficits, which can foster distrust and miscommunication between medicine professionals and communities that may practice and integrate CAM in their healthcare journeys [21,22]. As noted in the 2020 United States census, 20.6 million people identify as Asian, Native Hawaiian or Pacific Islander, in which 1.2 million live in New York alone [23]. In keeping with TouroCOM’s mission to practice medicine in underserved communities, it is important to take steps to address cultural/racial biases as they apply to CAM practices, especially in Asian-origin CAM [10]. The foundation of these biases can be created during undergraduate medical education, in which dismantling them may require intervention at this level.

Future directions for intervention can include a needs-based assessment into the best method of delivery and instruction for undergraduate medical students to expose them to CAM practices. While it is important for students to critically assess and question the effectiveness and scientific basis of CAM practices, it is also important to promote unbiased methods of communication and evaluation when interacting with CAM practitioners. This can be achieved by developing a curriculum that presents balanced viewpoints that ensure that objectives and overall competence in the material is achieved in a systematic fashion. As evinced in the Carnegie Report and subsequent studies, medical education has attempted to bring about this change, albeit in a piecemeal fashion that further highlights the fragmentation and inequities of the medical profession [24,25]. In doing so, CAM curriculum can be used to identify areas that are needed for improvement or remediation as well as potential sources for medical error and confusion for developing medical professionals. This can then be extrapolated and applied to other healthcare graduates and educational levels.

All authors contributed equally to the conception, data collection, and editing of this manuscript.