Along with focal cortical dysplasia, hippocampal sclerosis and remote infarcts, tumors are a well known cause of medically intractable or pharmacoresistent epilepsy [1,2,3]. Most of the tumors encountered in this setting represent low grade glioneuronal neoplasms, particularly gangliogliomas and dysembryoplastic neuroepithelial tumors. In 2005, Wang and colleagues reported on 8 tumors which they designated as so-called “monomorphous angiocentric gliomas” [4]. The title of their paper suggested that these tumors were epileptogenic (all eight patients had epilepsy) and displayed features of infiltrating astrocytoma and ependymoma. During the same month, Lellouch-Tubiana and coworkers reported on a series of 10 children with refractory epilepsy who had similar appearing neoplasms which they referred to as “angiocentric neuroepithelial tumors” [5]. The term “angiocentric glioma” was used in reference to these tumors in a series of eight tumors reported by Preusser et al in 2007 [6] and the entity was included under this designation in the 2007 World Health Organization (WHO) Classification of Tumours of the Central Nervous System [7].

The purpose of this article is to briefly review the salient clinical and pathologic features of this relatively new entity.

Due to the rarity of this tumor, the precise incidence of this neoplasm is not known. The majority of cases have been described as arising in children. In the first three reported series [4,5,6], a total of 26 cases were presented; all but six of them were diagnosed in childhood. Almost all of the six adult cases presented with seizures in childhood [4,5,6]. Only anecdotal cases of this tumor have been described in geriatric adults over the age of 65 years [6,8]. There appears to be no gender predilection in the tumor.

Angiocentric glioma has been described to arise in a variety of locations in the brain with an apparent predilection for superficial cerebrocortical locations. The most common sites in early reported series were fronto-parietal lobes followed by the temporal lobe [4,5,6]. Tumors have been described involving the occipital lobe, as well as rarely the brainstem [9,10,11].

As previously mentioned, the vast majority of angiocentric gliomas present with epilepsy. Often, patients have had surgery for several years and become refractory to pharmacologic management, necessitating surgical intervention. Occasionally, based on the location of the tumor, patients may present with other symptoms. Reports of progressive hand weakness [8], headaches and visual disturbance [9,12], double vision and nausea [11], hemiparetic gait and facial nerve palsy [11], and psychotic symptoms [13] have been documented in the literature.

Imaging studies typically localize angiocentric glioma to superficial location with both cortical and white matter involvement [5]. The tumor is usually well circumscribed, solid, hyperintense and nonenhancing on fluid-attenuated inversion recovery (FLAIR) images [6]. On T1-weighted magnetic resonance (MRI) images, the tumor is marked in some cases by cortical rim-like hyperintensities; stalk-like extension toward the ventricle is noted in some cases on T2-weighted images and on FLAIR [5,6]. Descriptions of the gross pathology are sparse in the literature. Based on anecdotal personal experience, tumors may show focal blurring of the gray-white interface, similar to what is encountered in diffuse astrocytomas or oligodendrogliomas.

The most salient microscopic feature of angiocentric glioma is the presence of fairly monomorphic appearing, bipolar spindled cells which arrange themselves around blood vessels forming perivascular pseudorosette-like structures (Figure 1). The number of tumor cells which surround blood vessels may range from a single layer to multiple layers. Cells may be arranged radially or longitudinally around vessels. Satellitosis around neurons in the cortex is a relatively infrequent finding. Individual cells typically have rounded to elongated nuclei, a finely granular nuclear chromatin pattern and inconspicuous nucleoli. Some cells may have a more epithelioid appearance with more eosinophilic cytoplasm and more defined cell boundaries. Focally, the tumor may demonstrate microcystic changes (Figure 2). In other areas, spindled tumor cells may be more compactly arranged, resembling a schwannoma (Figure 3). Rarely, calcifications (Figure 4) may be present. The tumor is generally not circumscribed and an infiltrative margin is common, reminiscent of a diffuse infiltrating astrocytoma (Figure 5). As tumor cells infiltrate and reach the cortical surface, there may be a piling up of tumor cells in this location, referred to subpial aggregation. Intermixed neurons are frequently encountered in cortical regions with infiltrative tumor. Mitotic activity is generally absent or rare; although rare instances of tumors with increased mitoses (11 mitotic figures in 50 high power fields) have been documented [4]. Vascular proliferative changes and necrosis are not features of these neoplasms. Rare cases of angiocentric gliomas with mixed features of ependymoma have been rarely described [4,14,15]. 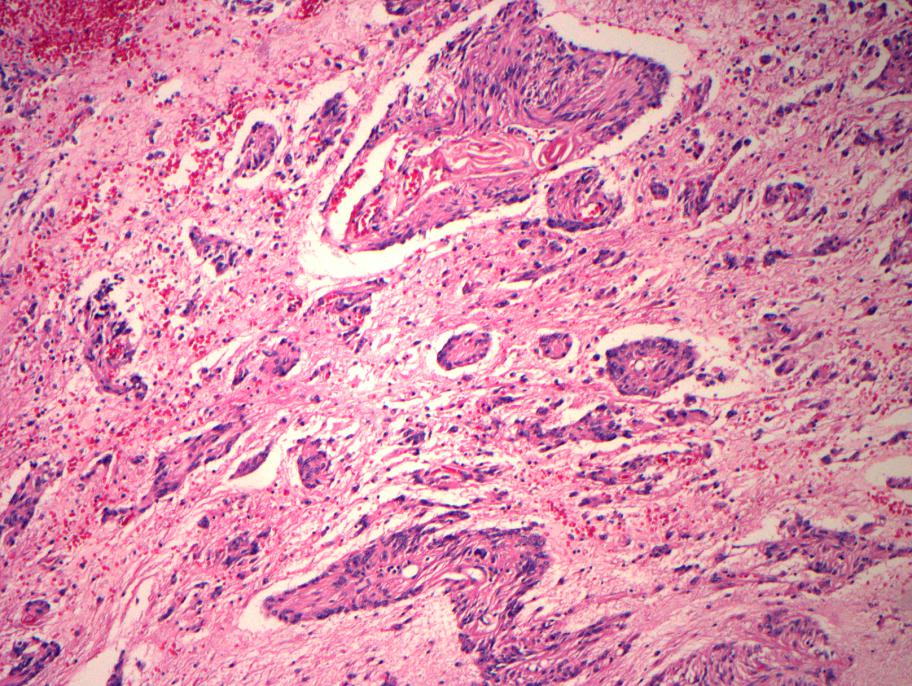 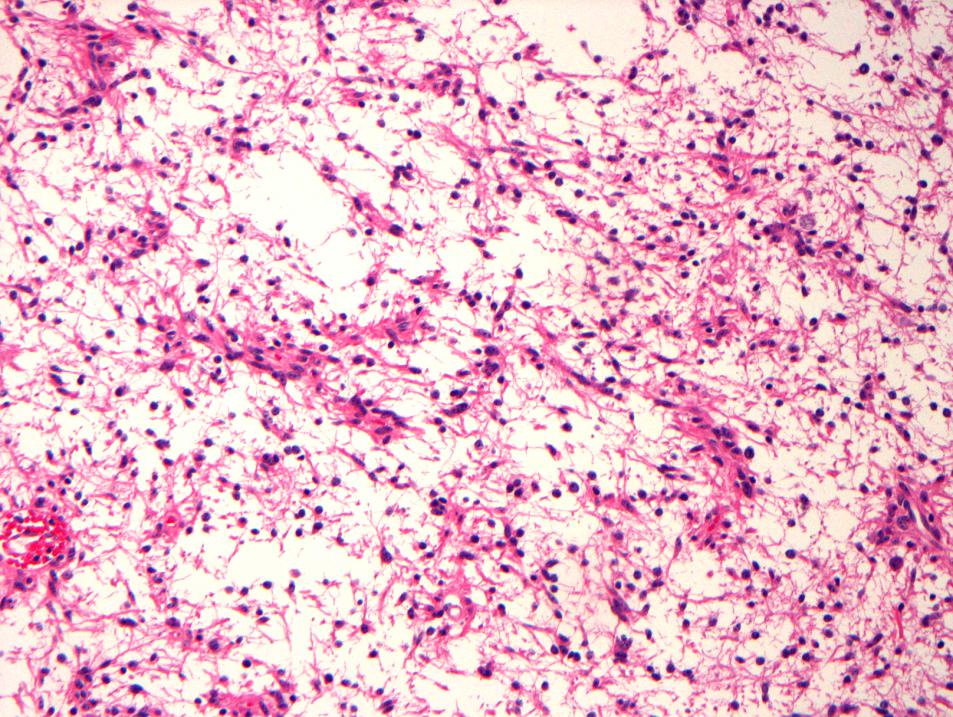 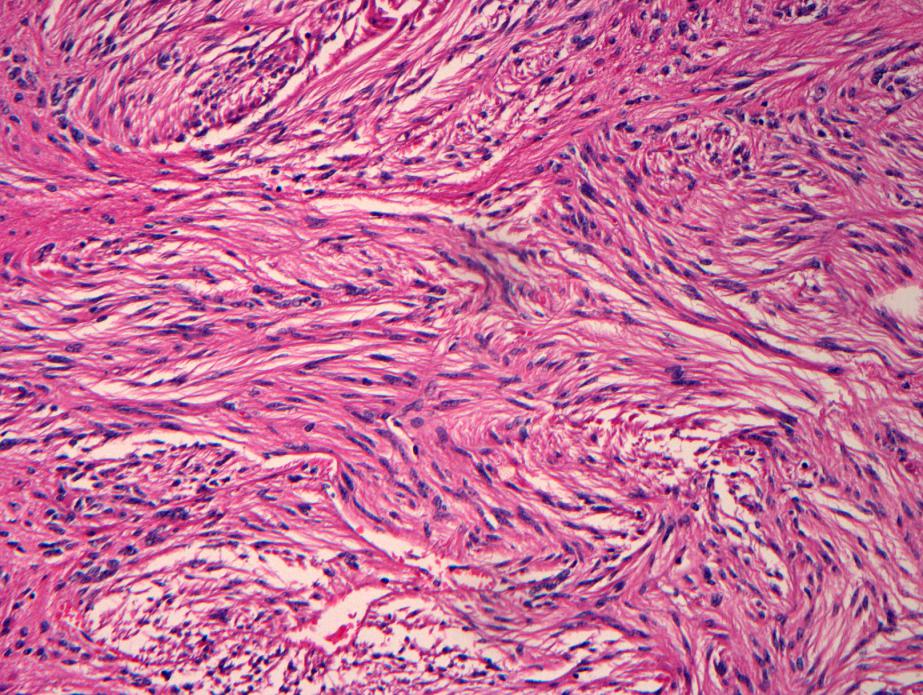 Figure 3 Area of the tumor may be marked by a moderately dense arrangement of bland spindled cells (hematoxylin and eosin, original magnification 200X). 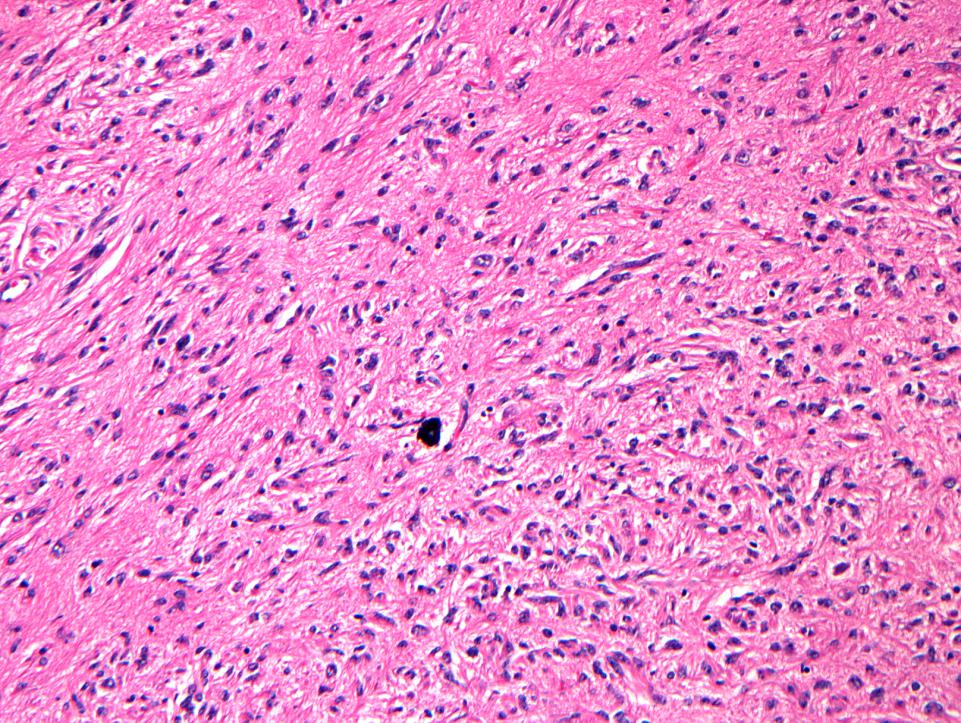 Figure 4 Rarely, microcalcifications may be present in the tumor (hematoxylin and eosin, original magnification 200X). 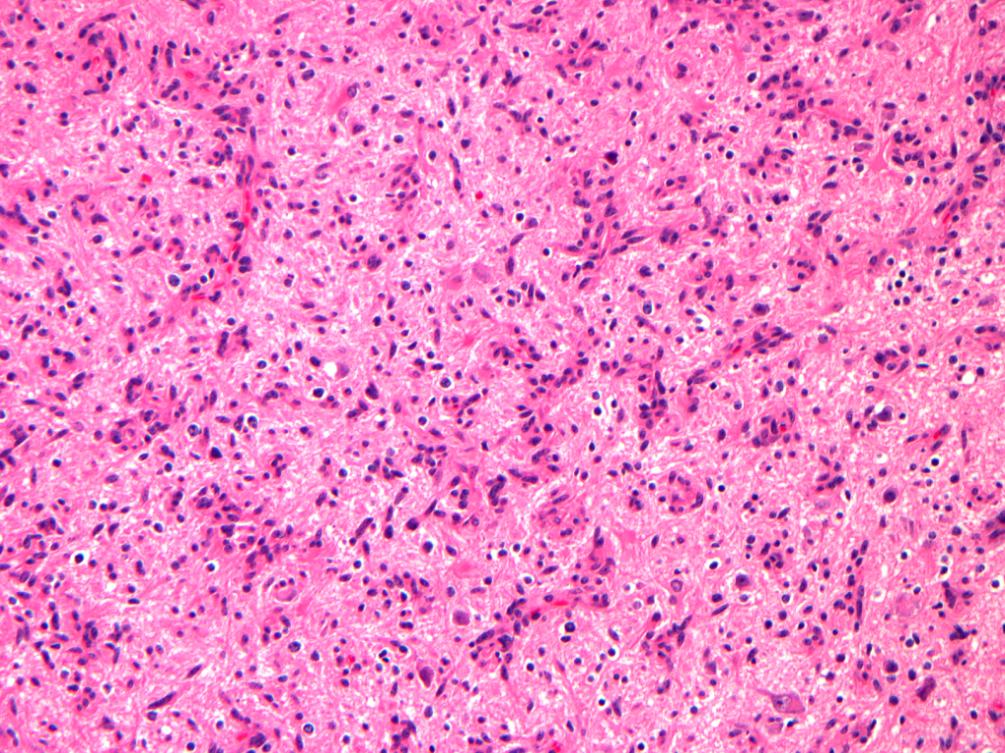 Figure 5 The margin of the tumor often shows an infiltrative pattern reminiscent of an infiltrating diffuse astrocytoma (hematoxylin and eosin, original magnification 200X). 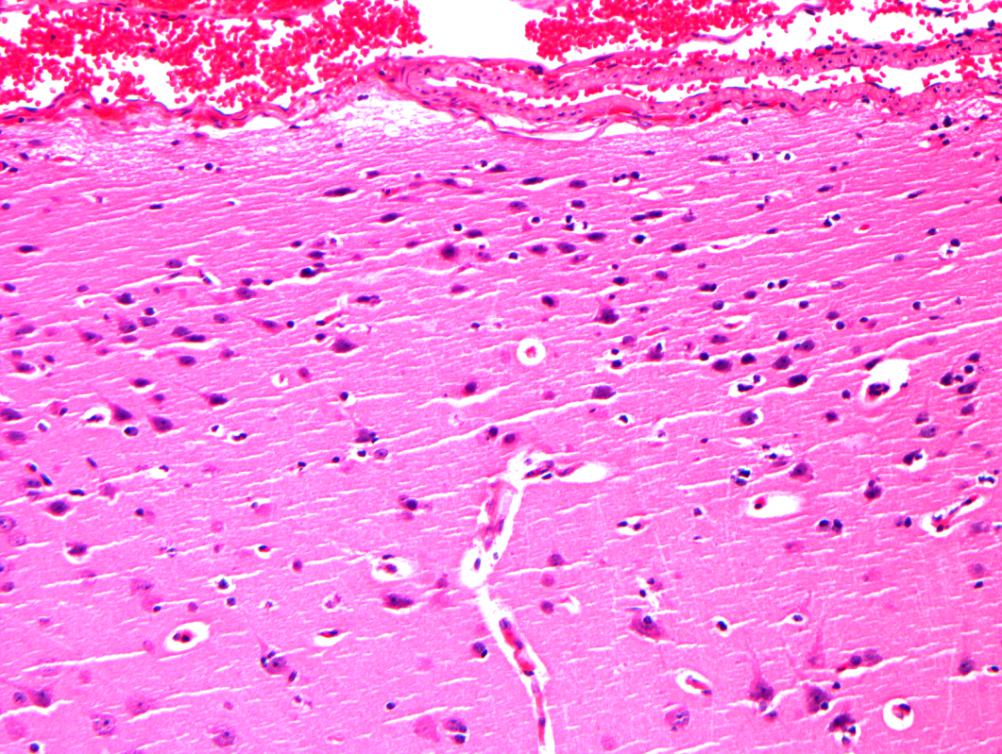 Ultrastructural examination of these tumors have demonstrated that cells contain intermediate filaments and have basement membranes where they interface with blood vessels [4]. Intercellular microlumens with microvilli and “zipper-like” junctions have also been noted [4,6]. Cilia have not been identified. It has been suggested that the cell of origin for these tumors may be bipolar radial glia that are prevalent during brain development and that these cells may share similar features to cells which give rise to ependyma [5].

Immunohistochemical analysis of the tumor has shown that tumors demonstrate positive staining with antibodies to glial fibrillary acid protein (GFAP), S-100 protein and vimentin [6]. Tumors do not stain with neuronal markers such as NeuN, chromogranin or synaptophysin [4]. A dot-like pattern of epithelial membrane antigen (EMA) immunoreactivity has been described, similar to what is seen in ependymomas (Figure 7) [4,6]. Other ependymoma markers such as CD99 and D2-40 are variably expressed [6]. p53 and isocitrate dehydrogenase-1 (IDH-1) (R132H) immunostaining has not been observed [4].

Generally, angiocentric gliomas demonstrate low rates of cell proliferation, as evidenced by cell proliferation markers such as Ki-67 or MIB-1. Wang et al noted Ki-67 indices ranging from <1% up to 5% in initially resected tumors [4]. Similar low labeling indices were reported by others [6,9]. One recurrent case in the series reported by Wang et al showed an index of 10% [4]. Only a few other anecdotal cases of tumors with indices in the 8-10% range have been reported [19,20,21]; the significance of the elevated indices in these cases is uncertain. 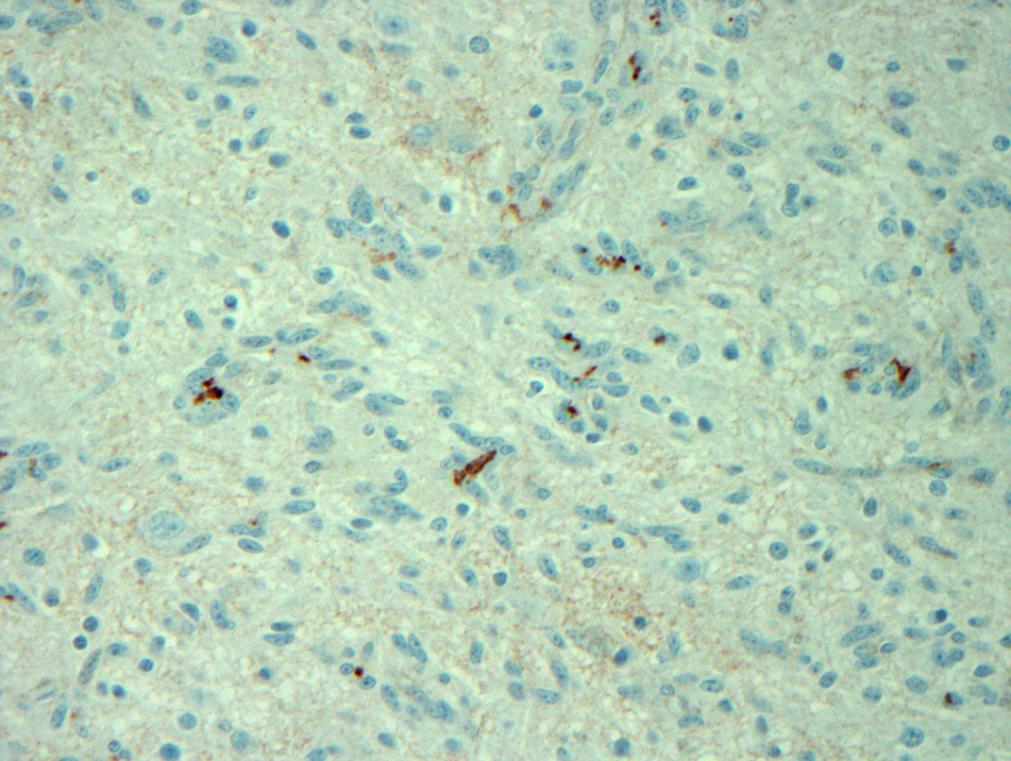 Figure 7 Dot-like immunoreactivity may be observed in some tumors with epithelial membrane antigen (EMA) staining (original magnification 400X). This staining pattern is not observed in low grade astrocytic neoplasms that are typically in the differential diagnosis, including pilocytic astrocytoma and diffuse astrocytoma.

Unlike oligodendrogliomas and a subset of diffuse fibrillary astrocytomas, angiocentric gliomas do not demonstrate evidence of IDH mutations [4,22,23,24]. BRAF mutations are also not a feature of angiocentric glioma [23,24]. In a genomic analysis of 19 angiocentric gliomas, all tumors showed gene fusions involving the MYB locus, a proto-oncogene, with most showing in frame MYB-QKI fusions (fusion of exon 15 of MYB with exon 5 of QKI) [25]. Another study substantiated this finding in a majority (87%) of 15 tumors evaluated [26]. Two fairly recent studies also substantiated this finding in brainstem tumors [27,28]. These fusions were not commonly seen in other glioma types, suggesting that these fusions may be specific and sensitive for angiocentric glioma. Using chromosomal comparative genomic hybridization, Preusser et al found a loss of chromosomal bands 6q24-q25 in one of eight tumors examined; they also found a copy number gain of two adjacent clones from chromosomal band 11p11.2 in one of three tumors evaluated by a high resolution screen by array-comparative genomic hybridization [6].

Given that the majority of these tumors have an indolent clinical course and behave in a low grade fashion, they have been designated by the WHO as grade I neoplasms [7]. They are generally amenable to surgical resection. Rare cases of recurrence in tumors which have been initially incompletely excised have been documented; the recurrence may demonstrate features of a higher grade tumor [4,14]. In most cases, gross total resection has been associated with good seizure control [9]. There is no need for postoperative radiation therapy or chemotherapy in the typical angiocentric glioma.

Angiocentric gliomas are a relatively uncommon tumor, most frequently encountered in children and young adults and often presenting with epilepsy. Recent work has suggested an association of this tumor with focal cortical dysplasia, suggesting a developmental basis for its origin. Tumors are generally fairly well circumscribed and morphologically marked by the presence of bipolar spindled cells which arrange themselves around blood vessels. The tumors behave as low grade neoplasms and have been designated by the WHO as grade I. A number of recent studies have noted the presence of MYB-QKI gene fusions in these tumors, a finding that is unusual in other low grade gliomas.

The author has completed all the work.