One Week of Continuous Anesthesia by Propofol (2,6-Diisopropylphenol) Does Not Cause Neurobehavioral Changes after Recovery in the Mexican Axolotl Salamander

Recommended citation: Andersson SA, Thygesen MM, Dittrich A, Lauridsen H. One Week of Continuous Anesthesia by Propofol (2,6-Diisopropylphenol) Does Not Cause Neurobehavioral Changes after Recovery in the Mexican Axolotl Salamander. OBM Neurobiology 2022; 6(3): 127; doi:10.21926/obm.neurobiol.2203127.

The Mexican axolotl salamander is an important model species in regenerative medical research and experiments involving this species often require anesthesia which is usually limited to the duration of the surgical procedure or other interventions, usually lasting no more than a few hours. This study aimed to examine the potential for increasing the duration of anesthesia by continued propofol infusion for a week. Neurobehavioral changes in response to prolonged anesthesia were evaluated after two and seven days of recovery by assessing the resultant changes in response to tactile and nociceptive stimulation and tracking activity levels post-anesthesia. No indications of neurotoxicity were found, but significant and reversible swelling was observed. This concern should be addressed before attempting to extend the duration of anesthesia beyond one week in future experiments. In summary, our study demonstrated the potential for long-term anesthesia in the Mexican axolotl with no indications of neurotoxicity.

The Mexican axolotl Ambystoma mexicanum (Shaw and Nodder, 1798) is a salamander species having high regenerative abilities and has been widely used as a laboratory model to explore limb regeneration, spinal cord injury, and cardiac regeneration [1,2,3]. In order to reduce the variance associated with animal behavior during regeneration, we ultimately seek to establish a long-term anesthesia model for the axolotl, spanning the entire regenerative period. Previous studies have shown that propofol (2,6-diisopropylphenol) can anesthetize axolotls and provide stable anesthesia. [4]. Propofol is preferred as a long-term anesthetic agent in comparison to other commonly used anesthetics in fishes and amphibians, MS-222 (ethyl 3-aminobenzoate methanesulfonic acid) and benzocaine (ethyl 4-aminobenzoate), that require organic solvents to dissolve in water and buffers to alleviate pH changes, which may cause skin irritation or lesions that could reduce animal welfare during prolonged exposure [5]. Additionally, propofol is a hypnotic and non-depolarizing agent [4,6] and does not affect cardiac function or regenerative capacity if provided in repeated doses [4]. However, anesthetic agents may be neurotoxic to the developing brain and cause long-term neurocognitive impairments in rodents [7] in a duration-dependent manner [8]. Therefore, our study aimed to evaluate the potential neurotoxicity of one week of continuous anesthesia by propofol in the axolotl, assessed by neurobehavioral changes to tactile and nociceptive stimuli and changes in the activity level.

The study was carried out in accordance with the Danish legislation for the care and use of laboratory animals. The experiments and housing conditions were approved by the Danish National Animal Experiments Inspectorate (protocol# 2015–15–0201–00615).

Animals used in this study were large Mexican axolotls (n = 6, mean body mass ± STD 63.2 g ± 17.4 g) of approximately 2 years of age. Of these animals, two and four were females and males, respectively. Animals were housed individually in plastic containers (78 × 56 × 18 cm3) containing 21 L of water with weekly water changes and a 12 h:12 h light/dark cycle. Furthermore, all anesthetized animals were housed together in a single container (78 × 56 × 18 cm3) with 10 L of aerated water to reduce the amount of propofol-contaminated wastewater. Animals were kept on fasting for two weeks before anesthesia and for the entire study duration.

Propofol (10 g*L–1 concentration, Propofol B, Braun, Melsungen, Germany) was used as the anesthetic agent throughout the study. Anesthesia was induced by immersing axolotls in an induction bath containing propofol (10.5 mg*L–1) for 30–40 min before moving them to a propofol maintenance concentration (3.5 mg*L–1). Undiluted propofol was continuously infused into the water by an infusion pump to replace the metabolized propofol. During the first 24 h of anesthesia, propofol was infused at a rate of 1.75 mL*day–1. Additionally, anesthesia depth was evaluated by turning axolotls on their backs; the anesthesia depth was deemed appropriate in the absence of a righting reflex and lack of response to tactile stimuli. At signs of inadequate anesthesia, the infusion rate was increased to 3.5 mL*day–1. Two periods of propofol anesthesia were evaluated: 24 h and seven days. Before the induction of the first anesthetic period, animals were kept fasting for two weeks to avoid gastrointestinal complications during the anesthesia.

Animals were neurologically examined after two and seven days of recovery following each period of anesthesia. Animals were stimulated with both tactile (gentle tap against the side of the head) and nociceptive (pinching of the tail) stimuli [2]. For both, stimulation was conducted in triplicate, with the maximum score defining the overall test score. The responses to stimulation were scored as follows: 1: No reaction to stimulation. 2: Local movement. 3: Immediate, coordinated flight response.

Activity level was measured over 2 h at the same time of the day (9–11 am) after 18 h with no disturbance using 2 frame*s–1 time-lapse recording (GoPro Hero 4 edition). From these recordings, the total activity time, the total distance traveled, and the efficient speed levels were extracted. Efficient speed describes the average speed of the animal traveling from one location to another in the aquarium. This parameter was added as an additional measure of coordinated movements since axolotls generally tend to “paddle” against a corner, thus, not covering any distance while still being active. Individual frames were extracted and analyzed using the ImageJ 1.50e tool by placing points of interest at the head of each animal before and after every movement. 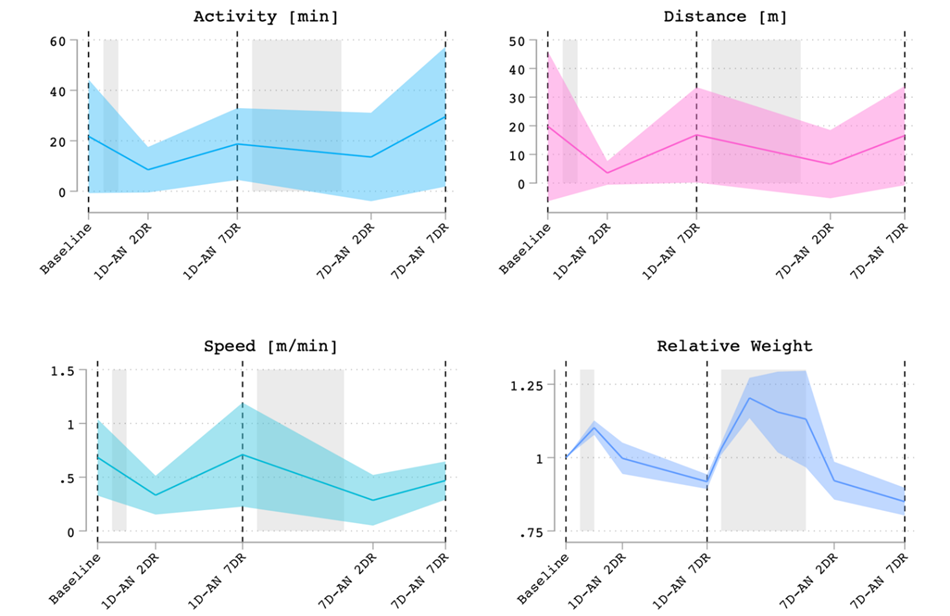 In this study, we demonstrated the efficacy of propofol in providing one week of continuous stable anesthesia to axolotls. This is an anesthesia duration nearly twice as long as previously reported for other species [9].

Axolotls showed no changes in the total activity time, or the distance traveled during activity tracking used in this study as an indicator of retained neurological function. The non-significant change in response to tactile and nociceptive stimuli is a gross indicator of preserved sensory function. Combined with the inconsequential changes in the activity level (active time and distance traveled), propofol is seemingly safe to use in axolotls for a week of anesthesia without any irreversible adverse effects. The reduction in efficient speed after both 2-day recovery time points (two days of recovery after 24 h and seven days of anesthesia) was reversed after a week of recovery, and the activity level was back to normal.

During anesthesia, a significant increase in body mass was observed, which may be related to impaired lymphatic function of maintaining body fluid levels in the hypoosmotic environment. Although this body mass increase was reversible, as indicated by the return to baseline levels within a few days of recovery, the relevance of using isosmotic aquarium solutions before initiating longer periods of anesthesia needs to be addressed. The increase in water absorption capacity might hamper the circulatory system’s function to a degree incompatible with long-term survival in anesthesia. The observed reduction in body mass was predictable due to the fasting state of animals for the entire study duration to avoid gastrointestinal complications.

From an ethical perspective, the implementation of anesthetized animal models in regenerative research might reduce the suffering associated with the regenerative process. A potential complication for an extended anesthetic period is propofol infusion syndrome, a rare and lethal complication reported in humans with prolonged propofol administration (>48 h). This syndrome is characterized by metabolic acidosis, rhabdomyolysis, bradycardia, and liver failure [10]. From a practical perspective, using fully anesthetized animals could reduce the variability levels due to individual behavior and thereby increase the quality of research as well as reduce the number of animals needed to perform a study with sufficient power. Long-term, stable anesthesia also allows the initiation of new potential experimental studies spanning several days. An extended anesthetic period could also be used for imaging live-cell migration and scar modulation in regenerating tissues, following the activity of immune cells during regeneration, or tracing the metabolism of radiolabeled metabolites in regenerative animals uncoupled from normally distributed behavioral traits. Moreover, our study used large axolotls; however, smaller animals might be used for such studies, although this has not been initiated in our study. The axolotls must, however, be large enough to handle the long periods of fasting associated with extended anesthetic duration. Additionally, long-term anesthesia of smaller axolotls may require a modification of the propofol infusion rate to avoid the risk of overdose in the smaller animals.

In conclusion, we show that long-term anesthesia of the Mexican axolotl is possible for a week with minor physiological effects (increased body mass and swelling) but without any signs of neurological impairment.