The present article describes some characteristics of the effect of essential oil (EO) extracted from Ziziphora clinopodioides harvested from Armenian highlands on microglial cell lines (BV-2 wild-type (WT) and acyl-CoA oxidase1 (ACOX1)-deficient (Acox1–/–) cells). The mutant cell line was used as a model to investigate cellular oxidative damage following EO treatment. The main components of the tested EO were pulegone, isomenthone, 1,8-cineole, piperitone, and neomenthole, with concentrations of 42.1%, 9.7%, 8.22%, 7.35%, and 5.9%, respectively, in plants harvested from the high-altitude Armenian landscape. The IC50 value of the EO in the DPPH assay was 7.025 µL/mL. The sub-cytotoxic concentrations (based on the MTT assay) for both cell lines were 5 × 10–1 µL/mL. The catalase activity of the WT cells was decreased following 24-h treatment with the EO, but that of Acox1–/– BV-2 cellswas increased. ACOX1 activity was decreased (up to 49%) at 72hof treatment. These results show the protective effect of the tested EO on Acox1–/– mutantcells.

Organic substances produced by plants are structurally and functionally diverse metabolites that are not only important for the adaptation and survival of plants but are also beneficial to humans in several aspects. These primary and secondary metabolites play many different roles in plant growth and development and in response to external factors [1,2,3]. Plants of the Lamiaceae family are the most diverse and widespread in terms of ethnomedicine and are among the most thoroughly studied ones. These plants possess a broad spectrum of biological activity, including antibacterial and antioxidant activities [4,5,6,7]. Ziziphora clinopodioides Lam. is a widely distributed perennial aromatic plant belonging to this family. It has been used in folk medicine since ancient times [8]. The medicinal value of this plant is mainly based on the yield of essential oil (EO) and its chemical composition [8,9]. The main components of this plant EO are thymol, pulegone, menthone, isomenthone, 1,8-cineole, and piperitone. According to the literature, all these metabolites possess antibacterial and antioxidant activities [4,9,10]. Benabdallah et al. (2018) showed the acetylcholinesterase inhibitory activity of pilegone, one of the main compounds of the investigated EO [11]. Sedighi et al. (2019) reported the neuroprotective effect of Z. clinopodioides hydroalcoholic extracts on a rat model of Alzheimer’s disease [12]. Other studies have also provided evidence of the neuroprotective effect of different extracts of this plant and their individual components based on their antioxidant activity [13,14].

On the basis of the abovementioned findings, we aimed to investigate the effect of the Z. clinopodioides EO components on the activity of antioxidant enzymes of the specialized central nervous system macrophages, namely microglial cells, which play a role in brain development regulation. For this purpose, the following two neuronal microglial cell lines were used: BV-2 wild-type (WT) cells and acyl-CoA oxidase 1 (ACOX1)-deficient (Acox1–/–) cells [15,16]. The mutant cells show accumulation of very long-chain fatty acids (VLCFAs) and generation of proinflammatory cytokines, revealing their promising application as a model to investigate changes in peroxisomal β-oxidation on oxidative stress, inflammation, and cellular oxidative damage [17,18]. The selected cell models meet three essential criteria for their application: they are well studied, are easy to cultivate, and play a central role in the development of oxidative stress-induced changes.

Z. clinopodioides plants were collected during the flowering season (July 2017–2019, Kotayk region, 1500–1600 m a.s.l.). The plants were identified at the Institute of Botany, National Academy of Sciences of Armenia, Yerevan, Armenia, and a voucher specimen number was provided. Plant samples are included in the herbarium of the same department and are available upon request.

Free radical scavenging activity of the tested EO was determined by 1,1-diphenyl-2-picrylhydrazyl (DPPH) assay [20]. Catechin was used as a positive reference. The sample solution contained 125 µL (1 mM) DPPH, 375 µL ethanol, and 500 µL of test solution (EOs or catechin at different concentrations). In the control solution, the test solution was replaced with ethanol. The absorbance was measured at 514 nm [21].

Cell proliferation (mitochondrial activity) was measured by 3-(4,5-dimethyltrazol-2-yl)-2,5-diphenyltetrazolium bromide (MTT) assay. Cells were seeded onto 96-well plates and then treated with various concentrations of Z. clinopodioides EO (50 to 5 × 10–4 µL/mL) for 24–72 h [23]. This test was performed to clarify the effect of the EOnon microglial cell viability.

Following the treatment of BV-2 microglial cells with the EO, the cells were washed with phosphate-buffered saline (PBS) and lysed by the addition of 50 µL of radioimmunoprecipitation (RIPA) buffer as described previously [23]. The protein content was measured according to the method of Smith et al.(1985) [24].

Catalase and ACOX1 activities in fresh cell lysate were measured according to the method of Cherkaoui-Malki et al. [25] and Oaxaca-Castillo D. et al. (2007) [26]. Data are expressed as units/mg of protein. 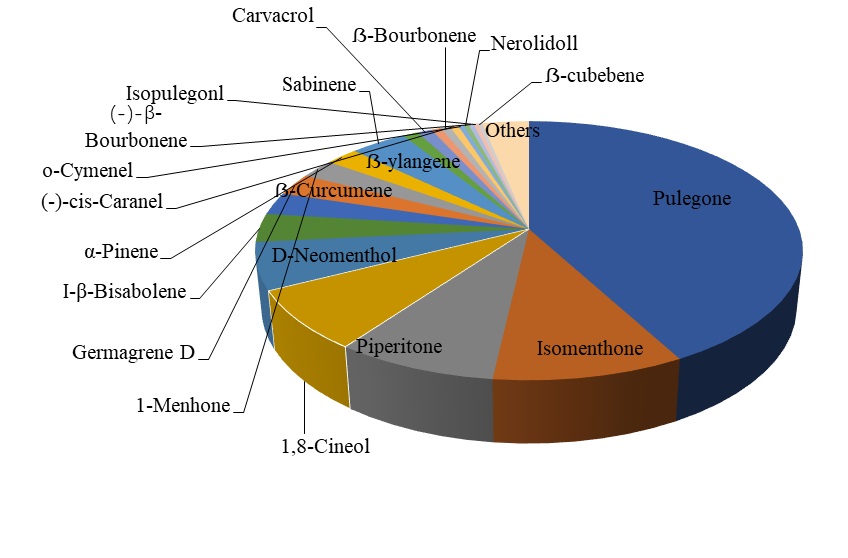 Figure 2 Effects of Z. clinopodioides EO on the viability of BV-2 WT and Acox1–/–microglial cells (MTT assay; A and B, respectively). Cells were treated for 24 h with the EO at various concentrations (50 to 5 × 10–4 µL/mL). Results are expressed as mean ±SD of three repetitions (p< 0.05 for both BV-2 cell lines).

Figure 3 Influence of the Z. clinopodioides EO on the cell viability of BV-2 WT and Acox1–/–microglial cells (MTT assay; A and B, respectively). Cells were treated with the EO at 5 × 10−1 µL/mL concentration. Results are expressed as mean ±SD of three repetitions (* indicates p< 0.05, ** indicates p ˃ 0.05, for both cell lines). 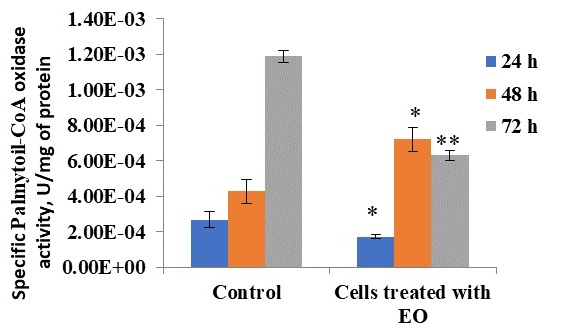 Z. clinopodioides EO is rich in pulegone, isomenthone, piperitone, and 1,8-cineole [8]. As reported previously [5], our present study results confirmed these findings data and revealed that the chemical composition of the EO of Z. clinopodioides from high-altitude Armenian landscape was very similar to those described in literature. This implies that despite the differences between the elevation of the growing area of Z. clinopodioides and climatic conditions, this plant produces approximately the same components of EO [5,8,19]. In contrast to the literature data [9,10], wherein thymol was reported to be one of the main components in the EO extracted from Z. clinopodioides of Armenian flora, the concentration of this component in the present study did not exceed 0.35%. All these components show reducing capability [28], which implies that they can alter the activity of different enzymes [29].

Ahmadi et al. (2021) [8] reported that the Z. clinopodioides EO shows a high cytotoxic effect on human lymphocytes at 1–10 µL/mL concentration. As mentioned earlier, we used a lower concentration of the EO in our experiments, which did not have a significant effect on the viability of the tested cell lines but could exert antioxidant activity in chemical-based assays.

The evaluation of the activity of ACOX1 – the rate-limiting enzyme involved in peroxisomal β-oxidation– and of the activity of catalase – the main peroxisomal antioxidant enzyme in the tested microglial cells– after treatment with Z. clinopodioides EO is of interest as these enzymes play a crucial role in maintaining redox balance of cells [30]. Peroxisomes also contain enzymes that catalyze the production of hydrogen peroxide (H2O2), superoxide (O2−), or nitric oxide (NO) as part of their normal catalytic cycle. These molecules react with other molecules to form other reactive oxygen species and reactive nitrogen species [23]. Some of the main antioxidant enzymes, such as catalase and superoxide dismutase, play critical and sometimes even a central role in the cellular antioxidant defense process by catalyzing the dismutation and subsequent quenching of H2O2, including those, which form from the enzymatic oxidation by the action of ACOX1 [15].

Our present study results showed that the tested concentration of Z. clinopodioides EO influenced the activity of the main cellular antioxidant enzymes catalase and ACOX1. Catalase activity was decreased in WT cells, which indicated that the treatment did not induce stress in these cells. Catalase activity was increased in ACOX1-deficient cells at 24hof treatment. This tendency was, however, not retained with the increase in EO treatment duration. This phenomenon can serve as an indicator of the protective effect of the Z. clinopodioides EO components on mutant cells [27,29].

This work is funded by the Science Committee of RA, in the frames of the research project № 21AG-4D027 as well as by Basic support from Committee of Science, Ministry of Education, Science, Culture and Sport of Armenia. This article is also based upon work from COST Action NutRedO CA 16112 supported by COST (European Cooperation in Science and Technology). Special gratitude to Prof. Mustapha Cherkaoui-Malki, Dr. Pierre Andreoletti for formation of this article as well as “NAIRIAN” CJSC for providing investigation material.

Conceptualization, N.S. and M.P.; methodology, N.S.; investigation, N.S.; data curation, N.S., N.S..; writing—review and editing, N.S and M.P; supervision, N.S. All authors have read and agreed to the published version of the manuscript.