© 2017 by the author. This is an open access article distributed under the conditions of the Creative Commons by Attribution License, which permits unrestricted use, distribution, and reproduction in any medium or format, provided the original work is correctly cited.

After lung transplant, infection is a leading contributor to morbidity and mortality, and hypogammaglobulinemia (HGG) may be an important risk factor for many of these infections.  Some reports suggest that HGG not only increases the risk of various infections, but also worsens survival.  The incidence of HGG has been shown to increase after lung transplant, and may be as high as 70%.  In order to mitigate this risk, intravenous immunoglobulin G (IVIG) replacement for the treatment of HGG has been utilized.  However, the safety and efficacy of this practice after lung transplant has not been well described.  The aim of this article is to review the current literature evaluating the use of IVIG replacement in HGG after lung transplant.  In addition, practical considerations of IVIG including administration, adverse effects, and cost will be discussed.

Lung transplantation is the last therapeutic option for patients with advanced lung disease. Despite improvements in short term survival, infection and rejection remain the leading causes of long term morbidity and mortality. Infection rates in lung transplant patients are higher compared to other solid organs, likely due to higher levels of immunosuppression and the direct exposure of the lung allograft with the environment. [1,2,3]

Reports of the association of HGG in solid organ transplant (SOT) recipients with infection have been described in the literature since the 1970s [15] . Several studies have concluded that HGG is associated with increased risk of various types of infections in kidney, liver, lung, and heart transplant recipients, and patients with ventricular assist devices [16,17,18,19,20,21,22,23] . Two studies have found an association between HGG level and risk of clostridium difficile associated infections [24,25] .

In regards to HGG and infection risk specific to lung transplant recipients, Goldfarb and colleagues concluded that patients with HGG (IgG <600 mg/dL) were at a higher risk of bacterial (2.96 vs. 0.45 episodes/ year), fungal (60% vs. 0%) and invasive CMV disease (24% vs. 0%). They also described that patients with severe HGG (IgG <400 mg/dL) had poor survival, however, statistical significance of this finding was not published [26] . In a smaller cohort, Kawut and colleagues found that severe HGG (IgG <400 mg/dL) was associated with higher incidence of pneumonia (63% vs. 16%) and worse survival but did not detect significant association with CMV disease and fungal infections compared to patients with mild or no HGG [13] .

Another proposed consequence of HGG may be an increased risk of acute and chronic rejection. Yamani and colleagues were amongst the first group to analyze the relationship between HGG on infection and rejection [22] . They concluded that heart transplant recipients with severe HGG (IgG <350 mg/dL) are at a significantly higher risk for opportunistic infections compared to patients with no HGG or mild to moderate HGG (IgG 350-700 mg/dL). In addition, they concluded that three or more rejection episodes and treatment with pulse steroid therapy are associated with severe HGG.

Lederer and colleagues were among the first investigators to evaluate the benefit of IVIG replacement in HGG patients after lung transplant [35] . The study was a randomized, double-blind, placebo-controlled two-period crossover study. The research group recruited 10 patients who were at least 3 months from their lung transplant with IgG level < 500 to participate in the study. Each patient went through two treatment periods. They were randomized to either placebo or IVIG replacement for 12 weeks, patients underwent a twelve weeks washout period, then followed by crossover treatment for 12 weeks. Median time from transplant to enrollment was 187 days (range 119-1330). The primary endpoint of the study was the number of bacterial infections during the treatment period. The authors concluded that treatment with IVIG did not reduce risk of bacterial infections but there was a trend towards increased risk of any infection (OR 2.7; 95%CI 0.95 to 7.6; p=0.06) in placebo group. There were several limitations to this study. This study potentially lacked power to detect differences based on the small sample size and low event rate. Perhaps the most significant limitation was the uncertainty whether there was a carryover effect in patients who had received IVIG first.

The only other study in lung transplant recipients was a single-center, retrospective, observational study that evaluated the effects of IgG replacement with IVIG in patients with HGG [36] . Fifty-four patients with moderate HGG (IgG < 600 mg/dL) who received IVIG replacement therapy were identified, and they were compared to 30 propensity-score matched control patients with normal serum IgG level. The primary endpoint for this study was survival and chronic lung allograft dysfunction (CLAD)- free survival. Median time to first replacement dose was 3.5 months (IQR 0.5-9.4) and lasted 4.5 months (IQR 1-17.7). The investigators found no difference in survival, CLAD-free survival, rejection or infection rates, suggesting that infection risk is normalized after IgG is replaced in transplant recipients suffering from HGG. Although the results seem promising, there are several limitations to this study. The retrospective nature of this study introduces selection bias. It could be underpowered to detect a difference due to the small sample size. In addition, the study spanned across more than a decade, and therapeutic advances and changes in practice patterns should be considered. It may be reasonable to make the association that repleting with IVIG normalized risk for infection, as previous studies have shown strong association between HGG and infection. The null findings for median survival and CLAD-free survival should be interpreted with careful considerations.

Further large prospective trials should be conducted to strengthen the data for IVIG replacement and reduction of infection, and to uncover its effects on rejection and survival. Future studies should stratify benefits of IVIG therapy based on IgG level (i.e. mild, moderate and severe HGG）.

The benefits of replacement must be weighed against the potential rare adverse effects of IVIG such as renal failure, thrombotic events, infusion related reactions and transfusion related acute lung injury (TRALI) [37,38] . Different formulations of IVIG are available and providers should select the most appropriate product based on the clinical situation and formulary preferences. Gamunex-C® is our preferred inpatient IVIG product at this time. At our outpatient infusion center, we carry four different formulations, Gamunex-C®, Gammagard®, Flebogamma® and Carimune®. We pre-medicate our patients with acetaminophen and diphenhydramine. IVIG infusion is then started at a rate of 1mg/kg/min and rate is doubled every 30 minutes up to a maximum rate of 8 mg/kg/min. [Table 2] summarize our approach to managing infusion related reactions. If patients do not tolerate the infusion despite lower infusion rate or altering the pre-medication regimen, we would consider rechallenging with a different formulation depending on patient specific factors and the severity of the infusion related reaction.

Acute renal failure (ARF) is one of the major concerns with the use of IVIG. It is caused by the different stabilizers used in the different formulations of IVIG to prevent dimer and polymer formation. There are two main types of stabilizers, glucose-based and amino acid-based. Glucose-based stabilizers include sucrose (Carimune®), glucose (Gammagard®), maltose (Octagam®), and sorbitol (Flebogamma® and Gammaplex®). Amino acid-based stabilizers include glycine (Gamunex-C® and Gammagard®) and L-proline (Privigen®). Sucrose-based IVIG poses the highest risk of ARF, compared to glucose, maltose and sorbital based products. Amino acid-based products have the lowest risk of ARF but is reported secondary to hemolysis [39] . Patient specific factors should be considered when selecting IVIG products and renal function should be monitored

The high cost of IVIG (~$100-170/g for various IV formulations and more than $200/g for subcutaneous formulation) must be considered against the proposed benefits when this therapy is initiated (i.e. patient quality of life and potential cost savings for infection management and hospital stay). Pharmacoeconomic analysis need to be performed to address cost-effectiveness, since IVIG replacement can be cost prohibitive. When utilizing IVIG in the out-patient population, approval by the insurance through a prior authorization process can be time consuming as HGG is considered “off-label”. Providers should be prepared to submit supporting primary literature during for appeals. 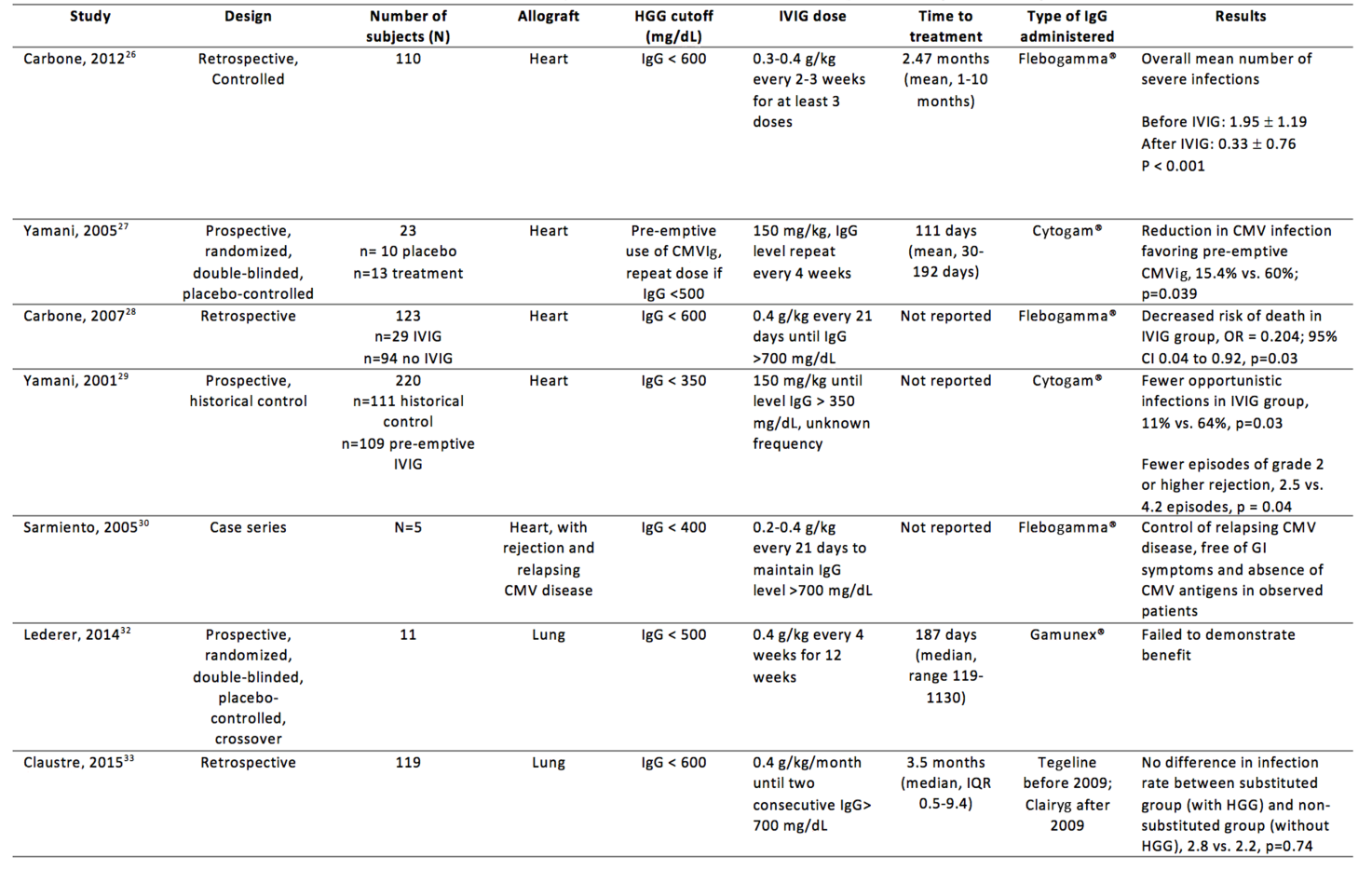 Lung transplant recipients carry the highest risks of infection among all the solid organ transplant patients, especially within the first year post-transplant when level of immunosuppression is often highest [12] . HGG is defined as serum IgG < 700 mg/dL and is observed frequently in lung transplant patients. HGG, especially severe HGG (IgG < 400 mg/dL) has been associated with increased risks of infection, mortality, and rejection. IVIG replacement with non-specific IVIG or CMV-Ig may have some positive effects on infection, although its effects on mortality and rejection are conflicting and requires further elucidation. Based on the existing data, routine IgG level monitoring is reasonable before and after lung transplant. Replacement with IVIG should be considered, especially in patients with severe HGG (IgG < 400 mg/dL) and native and/or donor infections. The benefits of replacement must be weighed against the potential adverse effects and cost of IVIG. Further larger, prospective studies are needed to determine the effects of IVIG replacement on infection, rejection, and mortality.

We would like to acknowledge Stefanie Houseknecht, PharmD, for providing her expertise relating to outpatient IVIG infusion and providing information regarding management of adverse effects at our infusion center.

All authors contributed extensively to the work presented in this paper.

The authors have no support or funding to report.