Background: Transplantation of isolated islets is one of the most powerful approaches to cure insulin-dependent (type I) diabetes mellitus (IDDM). Currently, the most widely used transplantation strategy is percutaneous perfusion into the liver via the portal vein. However, this approach has several drawbacks and is often limited by the large number of islets required and hypoxic damage to the grafts. Methods: In this article, we posit intrapancreatic parenchymal cell transplantation (IPPCT) as a promising strategy for cell-based therapy for IDDM. IPPCT is a very simple and convenient strategy that involves exposing the pancreas and spleen (which is tightly associated with pancreas) to micropipette-based injection of single cells or cell clumps into the pancreatic parenchyma under observation with a dissecting microscope. Results: In this work, we provide some possible experimental examples in mice as preliminary studies toward using an IPPCT-based approach for IDDM therapy. Conclusions: The idea discussed here appears to be a unique experimental system to evaluate the in vivo function of pancreatic β-cells isolated from normal tissue or those produced in vitro.

Insulin-dependent (type I) diabetes mellitus (IDDM) is an autoimmune disease leading to the destruction of insulin-producing pancreatic β-cells in the islets of Langerhans. Therefore, insulin must be replaced by subcutaneous injection, and blood glucose levels should be frequently monitored to manage the risk of hypoglycemia. Islet transplantation has been considered a useful therapeutic approach to avoid periodic dermal injections of insulin.

Transplantation of human islets into the portal vein of the liver has been a major approach to cell-based therapy of IDDM [1]. However, there are also some drawbacks to this approach, including: (1) the required large number of purified islets (~3,200), and (2) the shortened life-span of grafted islets. The main cause of the latter limitation is thought to be the lower levels of oxygen and higher nitric oxide (NO) concentrations in the liver than in the pancreas, which are both known factors that affect cell survival and cause tissue damage [2]. Therefore, one group suggested an alternative method of cell-based therapy for IDDM, namely, grafting of islets into the pancreas [2,3]. In the group’s study, a small number of islets (~600) were experimentally transplanted into the pancreas of streptozotocin (STZ)-treated Lewis rats through a single elongated pocket (2~2.5 cm) made between the organ capsule and parenchyma. The islets were introduced into the pocket by expulsion from an elongated micropipette tip. The grafted tissues survived at least 60 days without appreciable cell death, and during this period, increased serum levels of insulin were observed in the treated animals [2]. Unfortunately, a detailed methodology for successful grafting into the pancreas remains to be published. In addition, no attempts have been made to study the procedure in small animal models, such as STZ-treated mice and spontaneous disease models in mice [i.e., non-obese diabetic (NOD) and non-obese diabetic/severe combined immunodeficiency (NOD/SCID)], which mimic the pathogenesis of IDDM [4].

In a previous work, we developed a novel method for grafting a small number of single cells, cell clumps from proliferative human tumors, or induced pluripotent stem (iPS) cells into pancreatic parenchyma of nude mice [5]. Results confirmed that the injected cells were retained at the injection site without appreciable cell spreading and could grow in the parenchymal microenvironment to form solid tumors within 1.5 to 2 months post-grafting. Interestingly, on grafting iPS cells into the pancreas, the resulting solid tumors displayed teratomas comprised of several differentiated cell types of the three germ layer origins. These findings show that the pancreas in itself does not hamper the differentiation ability of multipotent undifferentiated cells, which allows the formation of solid tumors by the small number of grafted cells (<103). Therefore, we named this technology intrapancreatic parenchymal cell transplantation (IPPCT).

In this article, we present specific experimental models for studying cell-based therapy for IDDM using IPPCT of pancreatic β-cells produced in vivo and in vitro.

The detailed procedure for IPPCT is shown in Figure 1. The spleen and associated pancreas were isolated from an anesthetized mouse [B6C3F1 (a hybrid between C57BL/6N and C3H/HeN); female at ~10 weeks of age; purchased from CLEA Japan Ltd., Tokyo, Japan)] using forceps under observation with a dissecting microscope (Figure 1a). 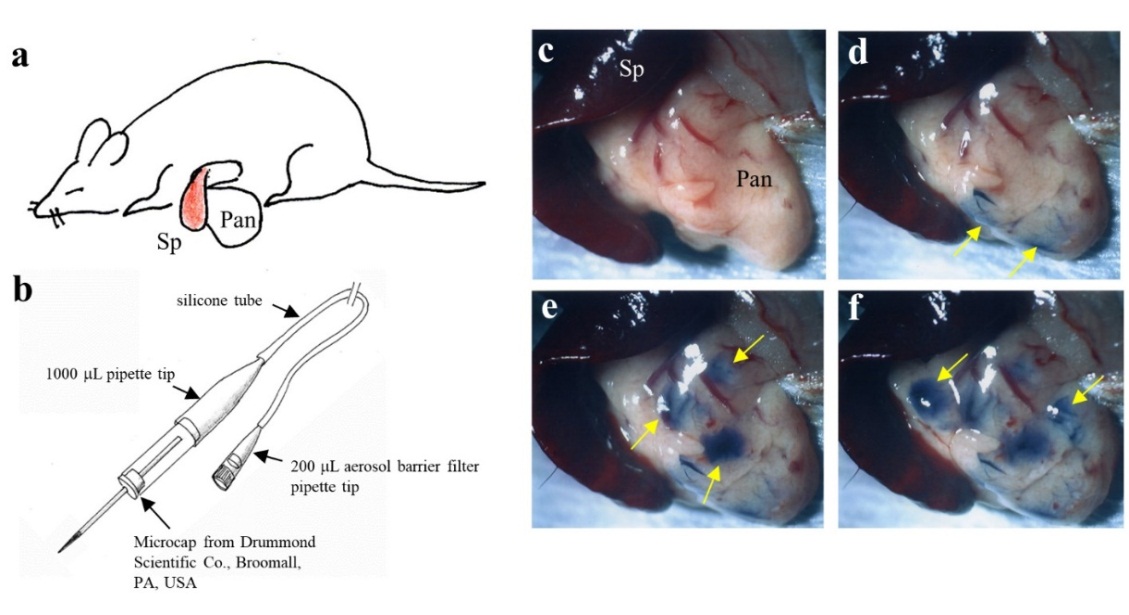 Figure 1 Outline of the IPPCT in mice. a) Surgical exposure of spleen (Sp) and pancreas (Pan) under anesthesia. b) Micropipette connected to a mouthpiece for injection of single cells or cell clumps. c-f) Injection of trypan blue-containing solution into pancreatic parenchyma: (c) Pancreas before injection; (arrows, d) injection at 2 different sites. (arrows, e) The same pancreas injected again at 3 different sites and then (arrows, f) at 2 other sites.

Next, a solution (1~2 L) containing cells (104 to 105) or clumps (>103) suspended in culture medium and 0.2 L of 0.5% trypan blue (Nacalai Tesque, Tokyo, Japan; used for visualization of injected solution after IPPCT) was aspirated into a glass micropipette (#GDC-1, Narishige Scientific Instrument Lab., Tokyo, Japan) connected to a mouthpiece (Figure 1b). The glass micropipette was made by a micropipette puller (P-97/IVF; Sutter; Sutter Instruments, Novato, CA, USA), and its tip was broken by forceps to reveal an inner diameter of 30 to 200 m. The micropipette was inserted directly into the pancreatic parenchyma under observation with a dissecting microscope, followed by immediate expulsion of the solution from the micropipette. After injection of the solution, the injected materials seldom remain in the injected area (Figure 1c vs. Figure 1d-f). At least 7 injections are possible per pancreas at once (Figure 1f). All animal experiments were performed in agreement with the guidelines of Kagoshima University Committee on Recombinant DNA Security and approved by the Animal Care and Experimentation Committee of Kagoshima University (permit no. 25035 and 25036; dated August 8, 2013). All surgeries were performed under three anesthetics (medetomidine, midazolam, and butorphanol), and all efforts were made to minimize suffering.

The most important consideration appears to be how long the grafted cells or clumps can survive in the host pancreas after IPPCT, for which a syngeneic transplantation would be desirable. For example, as shown schematically in Figure 2, a portion of the pancreas was dissected from the enhanced green fluorescent protein (EGFP)-expressing transgenic (Tg) mouse (Tg/+) and then cut into small pieces below ~0.5 mm2 in size. 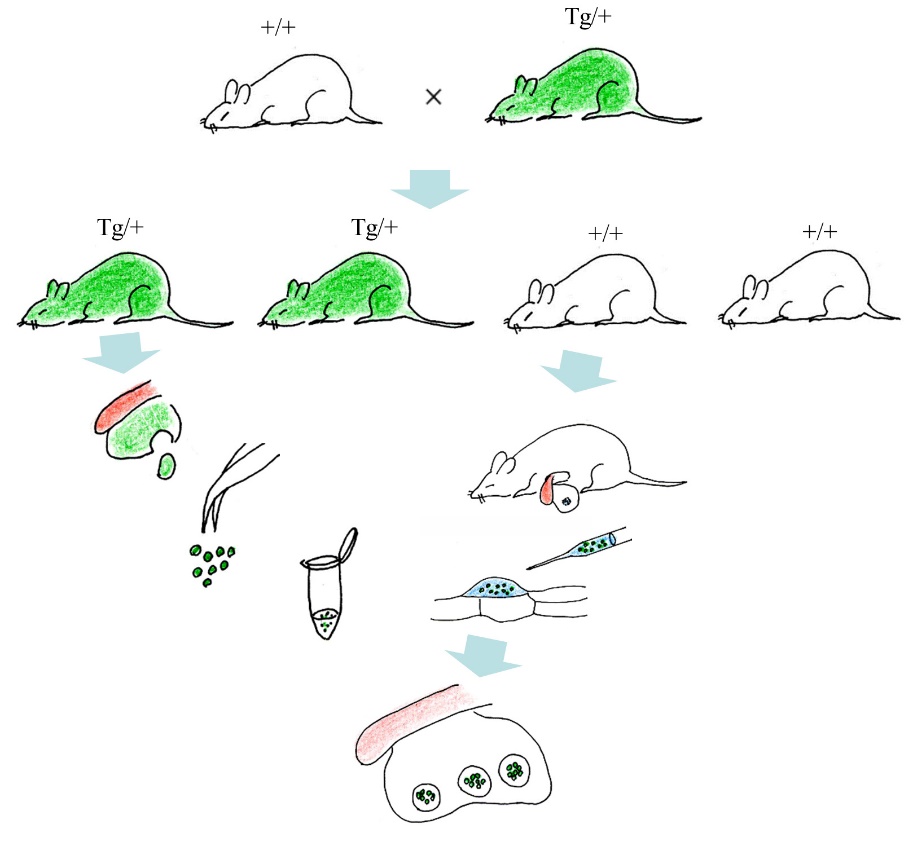 Figure 2 Experimental outline for syngeneic transplantation of fluorescent pancreatic cells into non-fluorescent pancreas. The cells derived from pancreas of EGFP-expressing transgenic (Tg) offspring (Tg/+) are transplanted into the pancreas of non-Tg (+/+) littermate to examine how long the grafted cells can survive in the host environment.

Immunodeficient mice models, such as nude and NOD/SCID mice, are powerful xenograft models for studying solid and hematopoietic tumors, cancer stem cells, hematopoiesis, humanized mice, and infectious diseases. Since nude mice (for example, BALB/c-nu) do not exhibit IDDM spontaneously, chemical ablation of the pancreatic β-cells (with administration of STZ) is required for induction of IDDM. In contrast, NOD/SCID mice exhibit IDDM spontaneously due to an autoimmune-associated destruction of β-cells. Using these STZ-treated nude mice and NOD/SCID mice, IPPCT could prove a useful method to test the ability of pancreatic β-cell-containing grafts to produce insulin in vivo. Figure 3 outlines the possible experimentation for this strategy. 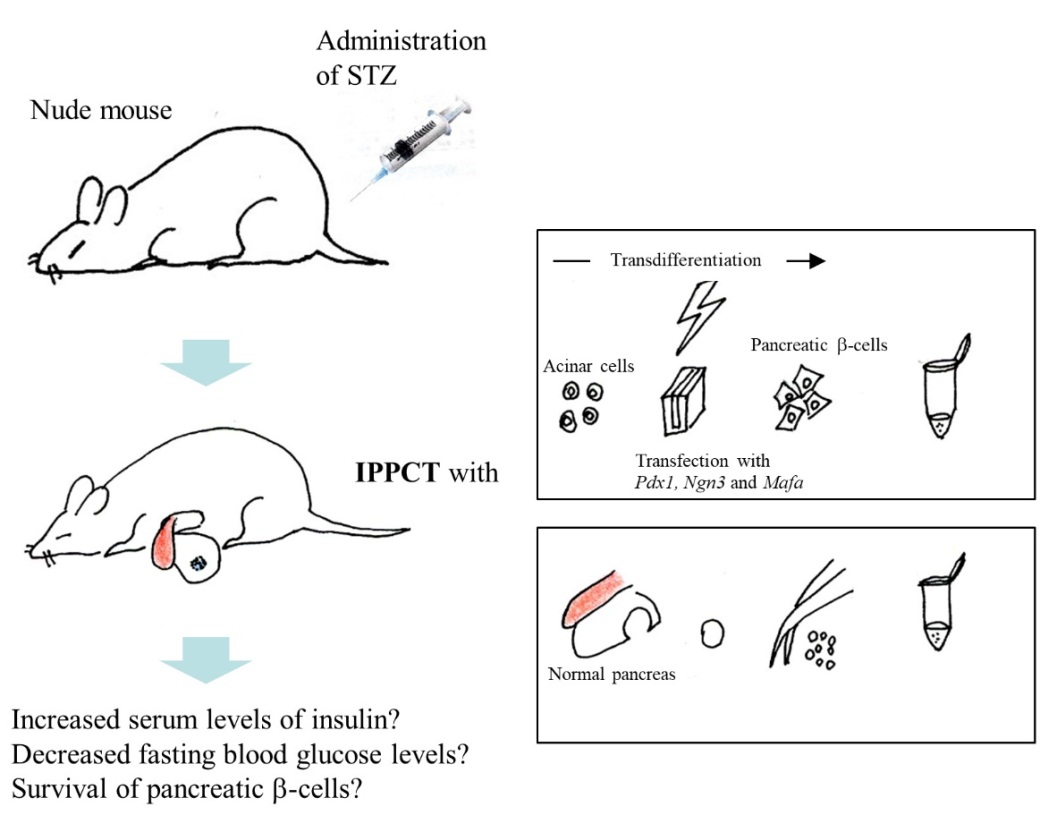 Figure 3 In vivo functional analysis of pancreatic cells after transplantation into the STZ-treated diabetic animal model. The in vitro-produced pancreatic β-cells that are obtained through acinar cell- to β-cell reprogramming or cells isolated from normal pancreas are inoculated into the pancreatic parenchyma of the STZ-treated nude mouse. Later, this treated mouse will show elevated levels of serum insulin and better survival of grafted cells.

Cells or cell clumps isolated from a normal pancreas, or those in vitro-produced as a result of transdifferentiation through forced expression of exogenous pancreas/duodenum homeobox protein 1 (Pdx1), Neurogenin-3 (Ngn3), and V-maf musculoaponeurotic fibrosarcoma oncogene homolog A (Mafa) in acinar cells [7] are suitable donors for IPPCT. Tissue-specific stem cells obtained by reprogramming of normal [8] or NOD [9] mouse-derived pancreatic cells, all of which have a potential to produce insulin, would also be suitable donors for IPPCT. Elevated serum levels of insulin, decreased fasting blood glucose levels and recovery of healthy islets in those IDDM model animals may be good indicators of recovery from hyperglycemia associated with IDDM. Furthermore, tagging the donor cells with an identical tag (for example, EGFP) would be helpful for evaluating the feasibility of IPPCT-based IDDM therapy.

Herein, we report a unique experimental system to evaluate the in vivo function of pancreatic β-cells isolated from normal tissue or those produced in vitro using IPPCT.