Background: Alpha-1-antitrypsin (AAT) deficiency is the most common hereditary disorder in adults and is associated with an increased risk of developing lung emphysema.

Methods: Here, we report the case of a 54-year-old man, who underwent bilateral lung transplantation due to AAT deficiency emphysema in the general hospital of Siena, Italy.

Results: The patient was diagnosed with partial AAT deficiency (189 mg/dL) associated with the PIMZ genotype; although he quit smoking, his lung disease progressed to chronic respiratory failure. The patient received a lung transplant and was alive 10 months later.

Conclusions: We consider this to be an interesting clinical case regarding the opportunity to implement augmentation therapy, not only to preserve native lungs, but also to prevent chronic lung allograft dysfunction.

Laurell and Eriksson were the first to report an association between alpha-1 antitrypsin deficiency (AATD) and the development of pulmonary emphysema [1]. Alpha-1 antitrypsin (AAT) is a serine protease inhibitor produced by the liver (normal range in serum 120–200 mg/dL) [2,3,4,5]. AAT is encoded by the SERPINA1 gene, which is located at the protease inhibitor locus on chromosome 14q32.1. More than 120 mutations of the SERPINA1 gene have been identified so far [3]. More than 95% of clinically significant disorders are associated with the Z variant (Glu342Lys), which is associated with a severe reduction in AAT serum levels [6]. The mutation alters the three-dimensional structure of the protein, forming a β-leaflet at the active site and causing polymerization [7]. The polymers break down or accumulate in the hepatocyte endoplasmic reticulum, causing the AAT deficiency (AATD) liver disease [8]. Regarding lung involvement, AATD is associated with panlobular emphysema caused by a protease-antiprotease imbalance, which favors tryptase and neutrophilic elastase activity, leading to progressive destruction of the lung parenchyma. Cigarette smoking is the major risk factor for the development of AATD emphysema [9]; for this reason, patients with AATD must avoid exposure to tobacco smoke to prevent deterioration of respiratory function [10]. In the last 20 years, AAT augmentation therapy has emerged as an effective and specific tool to reduce the progression of emphysema in patients with Z allele homozygosity of the SERPINA1 gene [11]. To date, there is no evidence to support augmentation therapy for heterozygous patients, even if the presence of emphysema that is out of proportion to age and smoking suggests a possible role for therapy in this setting [12]. However, augmentation therapy is not thought to halt progressive deterioration of lung function; for this reason, patients with severe AATD-related lung disease should undergo specific evaluation for lung transplant (LTX). In 2017, the registries of the International Society for Heart and Lung Transplantation reported that AATD-related emphysema accounted for 5.4% of all LTX performed between 1995 and 2014 [13].

A 54-year-old man with a history of smoking (45 packs/year) suffered spontaneous monolateral pneumothorax in 2003. He was successfully treated with conservative therapy at clinical onset. The patient had a family history of lung emphysema; a paternal uncle (non-smoker) underwent LTX in 2002 due to AATD-related emphysema.

In 2005, due to progressive exertional dyspnea, high resolution CT (HRCT) of the chest was prescribed and showed advanced bilateral panlobular emphysema with bullous dystrophy, predominantly in the upper lobes.

The patient was diagnosed with partial AAT deficiency (89 mg/dL). Genotyping of the SERPINA1 gene revealed that the patient was positive for a PIMZ genotype, i.e. heterozygous for the Z variant. Pharmacological bronchodilation with long-acting beta2-agonists, long-acting muscarinic antagonists and inhaled corticosteroids (LABA LAMA ICS) was prescribed, which substantially stabilized the patient’s clinical status, although he refused to stop smoking. Regular follow-up with PFTs and chest HRCT was conducted, showing a progressive impairment of lung function. In 2011, a severe worsening of functional parameters occurred after a severe exacerbation of disease associated with hypercapnic respiratory failure, for which ICU recovery was necessary. In May 2013, the patient was hospitalized again in our Unit for an acute exacerbation of dyspnea and chest pain. Chest auscultation revealed a reduction in vesicular murmur in all lung areas. Blood gas analysis (BGA) showed slight hypoxemia at rest (pO2 69.1 mmHg, pCO2 38.5 mmHg). The patient was diagnosed with pneumothorax caused by the rupture of emphysematous parenchyma and was strongly, but unsuccessfully, encouraged to quit smoking. In the subsequent years, progressive degeneration of the patient’s respiratory condition required numerous periods of hospitalization and the introduction of chronic oral steroid therapy. In 2015, he developed chronic respiratory failure, requiring O2 therapy (1 L/min at rest and 4 L/min under exertion). Chest HRCT showed a progression of apical dorsal emphysema in both lungs (Figure 1), while BGA in ambient air revealed severe hypoxemia (pO2 49.9 mmHg) with hypercapnia (pCO2 46.9 mmHg). The patient showed marked physical wasting and cachexia associated with dyspnea under minimum exertion. He could no longer work and needed help with daily activities. In May 2016, he eventually quit smoking.

In March 2017, the patient was evaluated at the Siena Referral Center for LTX; pulmonary function tests (PFTs) showed severe functional impairment with FVC 48%, FEV1 21%, and RV 300% (Table 1). The patient was started on therapy with high doses of bronchodilators, inhaled and oral steroids and 24-h oxygen therapy (1 L/min at rest and 4 L/min under exertion). Once smoking cessation was verified, the patient was enrolled on the LTX waiting list and, in October 2017, he underwent bilateral LTX. Nine months later, the patient remained stable, without the need for oxygen therapy; chest HRCT showed only minimal residual pneumothorax and bibasal pleural thickening (Figure 1).

This case report was approved by the local Ethics Committee. All patient data were de-identified. 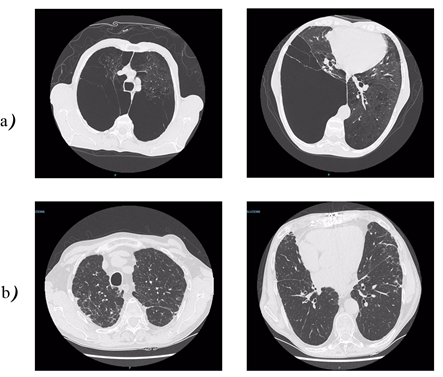 Figure 1 Patient’s CT Scan before (a) and after (b) lung trasplantation.

†: DLCO and KCO are not available because the patient developed chronic respiratory failure and needed 24h oxygen-therapy.

Current evidence suggests that AAT augmentation therapy has a positive effect in attenuating lung function decline in Z-homozygous patients with AATD-related emphysema. Recent studies of the effects of AAT on immunoinflammatory modulation mechanisms [14] have shown that augmentation therapy not only improves the protease-antiprotease imbalance, but also inhibits SERPINA1 gene expression in activated inflammatory cells, reducing synthesis of the defective AAT protein [15]. We speculate that this patient could have benefited from augmentation therapy in the early phase, although it could not have been prescribed at the time because the patient is heterozygous for the Z mutation.

Studies demonstrate that survival of patients with AATD-related emphysema after LTX is similar to those with COPD [16]. It is possible that augmentation therapy could improve outcomes in these patients, since LTX has no effect on genotype. Few studies have evaluated the efficacy of augmentation therapy in patients after LTX and the possible benefit is still controversial [17,18]. However, recent advances have demonstrated that AAT and extracellular antiprotease activity promote intracellular homeostasis by mitochondrial stabilization and modulation of the pro- versus anti-inflammatory cytokine balance, potentially inducing graft immunotolerance [18]. A phase 2 clinical trial is now underway to evaluate the efficacy of intravenous AAT in preventing primary graft dysfunction in LTX patients.

Despite our experience in Z allele homozygous AATD-related emphysema, augmentation therapy with AAT remains one of the most promising interventions in such patients, including those who are heterozygous. Moreover, the recently described immunomodulatory properties of AAT could be translated to new therapeutic opportunities in other settings, such as LTX patients with graft dysfunction.