The immunosuppressant drugs used in renal transplantation are distinguished into two categories, based on the time of use, as induction therapy and maintenance therapy. A different classification distinguishes drugs based on their use to control acute cellular rejection (TCMR) and acute antibody rejection (ABMR).

T-cell proliferation after transplantation is linked to IL-2 production. Thus, monoclonal antibodies against IL-2R are used in induction therapy [4]. Patients are stratified for high-risk and low-risk acute rejection to select a better induction therapy.

Generally, rATG is administrated at doses ranging from 1 to 6 mg and repeated for up to ten days. Induction therapy with a total dose of 6 mg/kg was found to be optimal [7]. A higher or extended period of doses is related to a high risk of infectious diseases or lymphoproliferative disorders. Alemtuzumab (Campath 1-H) as an induction therapy is not frequently used (10% of transplantations in the USA). Moreover, comparative studies on Alemtuzumab efficacy versus rATG or anti-IL-2R did not show a clear superiority. A systematic review of 21 studies documented that Rituximab is beneficial in the cases of ABO incompatibility, while not in the case of antibodies against donor HLA.

These patients may have induction either with rATG or with antibodies against IL-2R. The Kidney Disease: Improving Global Outcomes KDIGO (2009) recommends the use of antibodies against IL-2R as the first-line therapy in low-risk patients [8]. Anti-IL-2R antibodies are administered at 20 mg during transplantation and repeated in the fourth day after transplantation. Some studies advocate rATG superiority, but other studies do not confirm it for low-risk patients.

A systematic review by Cochrane analyzed 71 randomized controlled studies [9] that reported the efficacy of anti-IL-2R. In placebo-controlled studies, IL-2R inhibitors were found to reduce the incidence of acute rejection. Compared to rATG, IL-2R antibodies have a higher acute rejection incidence, but fewer side effects like infections and malignancies.

Maintenance therapy is administered lifelong in all transplant patients to avoid both acute and chronic rejection with subsequent organ loss. An adequate level of maintenance therapy is necessary to reduce immune activation in the recipient. After a long period of post-transplantation, a safe reduction of maintenance therapy may also be attempted to reduce the side effects. Drugs most frequently used in the maintenance therapy are steroids, antimetabolite drugs (azathioprine, mycophenolate mofetil [MMF], sodium mycophenolate enteric coated [EC-MPS]), calcineurin inhibitors (cyclosporine [CyA] and tacrolimus [TAC]), the inhibitors of mammalian target of Rapamycin (mTOR) (sirolimus and everolimus) and, more recently, Belatacept.

3.1 Mechanism of Action of Immunosuppressant Drugs

In almost all transplant centers, MMF and EC-MPS have been replaced by azathioprine. Mycophenolic acid is a selective inhibitor of the denovo pathway of purine synthesis. It also inhibits inosine monophosphate dehydrogenase and selectively inhibits B and T cell proliferation.

Cyclosporine inhibits calcineurin after binding to cyclophilin. As a result, the gene expression of cytokines produced by T-cells is blocked, principally, IL-2, IL-3, IL-4, IFN-γ, and TNF-α. In particular, IL-2 reduction lowers the immune response.

The mechanism of action is similar to cyclosporine with calcineurin inhibition. Although completely different, it does not bind to cyclophilin, but to a different molecule called FK506-binding protein (FKBP). Moreover, the side effects of TAC are similar to that of CyA, but with several differences.

Sirolimus and everolimus are the primary drugs belonging to this group. They bind to the complex mTOR and inhibit p70S6 kinase phosphorylation and the pathway mediated by IL-2. Additionally, mTOR inhibitors are a powerful inhibitor of vascular endothelial growth factor (VEGF). In several studies, mTOR inhibitors have been used to reduce or completely withdraw the calcineurin inhibitors.

Belatacept minimizescardiovascular risk and nephrotoxicity related to calcineurin inhibitors. T-cell stimulation needs a double signal. The first signal is represented by the interaction of HLA antigens and the T-cell receptor (TCR). Multiple stimuli represent the second signal. The most important is the interaction between CD28 on the T-cell and CD80 on the antigen-presenting cell (APC) (Figure 1). Belatacept acts as a competitive antagonist, binding to CD80 and inhibiting CD28 stimulation. 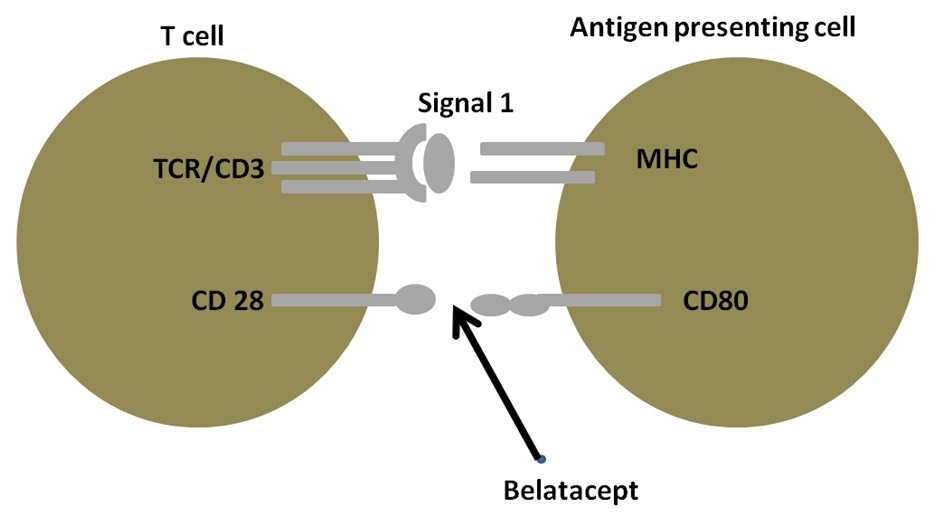 3.2 Criteria for Administration of Maintenance Therapy

The majority of transplant centers use maintenance therapy with three drugs, according to KDIGO guidelines [2].

- A calcineurin inhibitor (CyA or TAC)

3.3 Choice of the Calcineurin Inhibitor

CyA and TAC have a similar action, although the choice of TAC is more frequent. In a meta-analysis performed in 2005 [10], TAC significantly reduced the acute rejection incidence with respect to CyA. These data have also been confirmed by the Symphony study [11]. However, major side effects of TAC are neurological disorders, higher incidence of post-transplant diabetes mellitus and alopecia, while major side effects CyA are hirsutism, gum hyperplasia, and hypertension.

Both drugs interact with several other drugs. Higher levels of TAC or CyA in blood have been observed with the administration of nicardipine derived calcium blockers, anti-mycotic drugs and antibiotics like erythromycin. In contrast, lower levels have been observed in the case of anti-epileptic or anti-tuberculosis drugs.

The use of mTOR inhibitors to reduce the dosage of calcineurin inhibitors showed good results in several European studies [12]. However, a review from Cochrane [13] did not conclude on this strategy.

3.4 Choice of an Anti-Metabolite Drugs

Azathioprine has been completely substituted by MMF or EC-MPS, as documented in several studies. Additionally, severe side effects like leucopenia are observed with azathioprine.

Several studies have evaluated the efficacy and safety of Belatacept. While this drug blocks the second co-stimulation signalit does allow to do not administer the calcineurin inhibitors, avoiding their side effects. In the study BENEFIT [14], patients treated with Belatacept had a higher incidence of acute rejection at 1-year than CyA but a better renal function that persisted up to seven years after transplantation. These data were confirmed by the study BENEFIT-EXT in which marginal donors were used [15]. A problem common to both studies was a higher incidence of lymphoproliferative disorders in patients on treatment with Belatacept, principally in patients with no protection against the Epstein-Barr virus.

In the majority of patients with grade 1A or 1B TCMR, intravenous boluses of methylprednisolone (500 mg) repeated up to 3–5 times control the rejection. It is often necessary to increase the level of maintenance therapy. In patients with TCMR grade 1B, in the first period after transplantation, the use of rATG added to the steroids is preferred [16]. In patients with acute rejection, grade II or III, in addition to steroid boluses, administration of rATG at the doses of 1.5–3 mg/kg up to a total dosage of 5–10 mg/kg is often necessary. In the case of patients who cannot receive rATG because of allergy to rabbit proteins, it is possible to administer a single intravenous bolus of 30 mg Alemtuzumab [17]. Besides, in all patients treated with rATG or Alemtuzumab, anantimicrobial and antivirus prophylaxis is mandatory.

ABMR is a severe condition that often leads to graft loss and hence requires aggressive treatment. The removal of antibodies from the blood is done by plasmapheresis or immunoadsorption. Several drugs are needed to be added, and many of which represent a therapeutic approach for the future.

The intravenous infusion of 2 g/kg immunoglobulin leads to a high level of IgG in the blood that interferes with the Fc receptors on antigen-presenting cells. Additionally, the binding of IgG to FcgRIIb receptors on B lymphocytes and plasma cells leads to their apoptosis. Further immunomodulation of high doses of IgG is related to their capacity for favoring the development of T regulatory cells [18].

Rituximab is a monoclonal antibody against the antigen CD20 on lymphocytes. It is a depleting agent that leads to the elimination of B cells by complement-mediated cytotoxicity (ADCC) or by apoptosis after binding to CD20 [18]. To date, rituximab has been used in several protocols of desensitization in the case of transplants of HLA incompatibles [19] and to control ABMR itself [19]. Additionally, rituximab associated with plasmapheresis and IVIG can reduce the risk of antibody-mediated chronic rejection (AMCR) [20].

Bortezomib, a proteasome inhibitor, initially approved for the treatment of multiple myelomareduces the activity of NF-kB, cell proliferation and induces cell apoptosis [21]. In the treatment of ABMR, bortezomib was proved to be effective, especially in the treatment of early acute rejections [22].

Eculizumab is a humanized monoclonal antibody that binds to the complement C5 and inhibits the generation of C5a and the membrane attack complex (MAC), C5b-C9.In renal transplantation, eculizumab has been used in the treatment of ABMR in association with plasmapheresis and IVIG [23].

5.5 Drugs for the Future

Most of the drugs shown in Table 1 are promising for the treatment of ABMR. Many of them act by depleting B-cells or plasma cells. They are humanized monoclonal antibodies, anti-CD20 or CD19, which include ocrelizumab, ofatumumab, and veltuzumab. MDX 1342 acts on B19 on the plasma cell surface while epratuzumab acts on CD22. Belimumab acts on cytokines or cytokine receptors in particular against BAFF (B-cell activating factor) that causes B-cell activation and differentiation. IL-6 is a powerful activator of B-cells and plasma cells. Tocilizumab acts against the IL-6 receptor. In addition to eculizumab, another monoclonal antibody is rhC1NH that blocks C1. So far, only a single study has evaluated rhC1NH in treating patients with ABMR [24].

Table 1 Drugs for the future.

Salvadori M wrote the Editorial; Tsalouchos A helped in find literature data and the corrected references. Both authors reviewed the final form of the manuscript.