Severe hypercholesterolemia is an uncommon complication of allogenic hematopoietic cell transplantation (HCT). Treatment options for hypercholesterolemia due to liver graft-versus-host disease (GVHD) are limited because many antilipidemic medications are known to worsen hepatic functions. We report our experience on a case of a 38-year-old male with Philadelphia chromosome positive acute lymphoblastic leukemia presenting with steroid-refractory hepatic and lower gastrointestinal acute GVHD after matched sibling donor peripheral blood myeloablative HCT who developed severe hypercholesterolemia (>1,000mg/dl). The patient was effectively treated with extracorporeal photopheresis for GVHD and severe hypercholesterolemia resolved after weeks of therapy with lipoprotein apheresis.

Severe hypercholesterolemia (>1,000mg/dl) associated with graft-versus-host disease (GVHD) of the liver is a rare complication of allogenic hematopoietic cell transplantation (HCT) [1]. The etiology of hypercholesterolemia after HCT can be multifactorial. Several medications used for GVHD prophylaxis or treatment after HCT are known to cause dyslipidemia, including cyclosporine, tacrolimus, sirolimus and glucocorticoids [2,3,4,5,6]. However, the elevation of total cholesterol from these medications usually ranges between 200 to 300 mg/dl [7]. Severe hypercholesterolemia due to medications alone is rare. Treatment options for hypercholesterolemia due to hepatic GVHD are limited because many antilipidemic medications can further worsen liver function. In patients with severe hypercholesterolemia unresponsive to anti-hypercholesterolemic medications lipoprotein apheresis is a potentially effective treatment to prevent acute complications such as stroke, myocardial infarction, acute pancreatitis or hyperviscocity syndrome. Here, we present a case of a 38-year-old male with Philadelphia chromosome positive acute lymphoblastic leukemia (ALL) presenting with steroid-refractory acute GVHD of the liver and lower gastrointestinal tract after myeloablative matched sibling donor peripheral blood HCT who developed severe hyperlipidemia requiring lipoprotein apheresis. The patient provided written informed consent prior to proceeding with HCT.

A 38-year-old male presented with high-grade fever, left ear pain, fatigue, and lightheadedness. He was found to have hyperleukocytosis with a white blood cell count of 380,000/mL and 85% circulating peripheral blasts, associated with anemia and thrombocytopenia. Bone marrow biopsy was performed showing 72% lymphoblasts by morphology and 87% immunophenotypically abnormal cells (CD34+, CD43+, CD19+, CD10+, CD13+, CD33+, CD79a+, TdT+ and HLA-DR+) suggestive of B-cell ALL. Cytogenetic analysis demonstrated translocation (9;22) and loss of chromosome 7. Additionally, BCR-ABL molecular testing by polymerase chain reaction (PCR) was positive for p210 transcript. The patient received chemotherapy with hyper-CVAD (cycles 1 A-B) in combination with imatinib [8]. Diagnostic lumbar puncture (LP) showed no evidence of leukemia in cerebrospinal fluid (CSF) by flow cytometry or cytomorphology testing. He received prophylactic intrathecal chemotherapy with methotrexate and cytarabine based on the hyper-CVAD protocol [8]. Bone marrow biopsy performed after cycle 1B of hyper-CVAD chemotherapy revealed a 70-80% cellular marrow with no morphologic evidence of B-ALL. However, flow cytometry showed 1% residual lymphoblasts and molecular testing revealed a BCR-ABL1/ABL1 ratio of 3.4%. Tyrosine kinase inhibitor imatinib was replaced by dasatinib, while he continued with subsequent cycles of hyper-CVAD (2A-3A) that led to gradual reduction in his measurable residual disease (MRD) level. Subsequently, morphological and immunophenotypic complete remission was achieved. However, no further reduction of MRD could be achieved molecularly and he underwent a myeloablative matched sibling donor peripheral blood HCT with cyclophosphamide (120mg/kg total dose) and total body irradiation (1,320 cGy) conditioning. At the time of HCT he had a detectable molecular MRD by PCT testing (BCR-ABL1/ABL1=0.58%). GVHD prophylaxis consisted of cyclosporine and methotrexate (MTX). 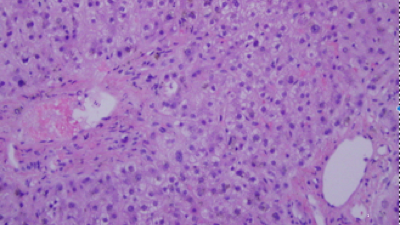 Figure 1 Liver biopsy of the patient with acute hepatic GVHD.

The patient received horse antithymocyte globulin (ATG; 30 mg/kg/day) from days +51 to +56 of HCT with no response [10]. In addition, bi-weekly extracorporeal photopheresis (ECP) was initiated and continued until day +208 post-HCT, which led to gradual improvement and subsequent resolution of his GI symptoms and LFT abnormalities [11]. Dasatinib was resumed at day +100 after HCT with restaging bone marrow biopsy showing complete morphological and immunophenotypic remission but detectable molecular MRD. At day +180 post-HCT the patient was found to have hyponatremia (serum Na=124 mmol/L), normal thyroid function tests, serum hyperviscosity (above detection limits) and severe hypercholesterolemia with non-fasting lipid panel showing direct low-density lipoprotein (LDL) of 1,735 mg/dL, triglycerides of 707 mg/dL, and total cholesterol/ high-density lipoprotein (HDL) ratio of 91. The patient had no prior history of cardiovascular disease or family history of hypercholesterolemia. Persistent LFT abnormalities in a setting of hepatic GVHD indicated that antihyperlipidemic medications would be of limited use. Therefore, under direction of preventative cardiologist with expertise in lipid disorders, urgent lipoprotein apheresis was initiated to achieve fast reduction of blood lipid levels and to prevent acute pancreatitis or cardiovascular complications [12]. He required a total of 13 biweekly cycles of lipoprotein apheresis with effective reduction in blood lipid levels and subsequent resolution of severe hypercholesterolemia after achievement of hepatic GVHD complete response with ECP therapy.

Close monitoring of cholesterol levels is important in patients after HCT in order to avoid hypercholesterolemia related complications. In addition, hyponatremia in some patients can be the sole sign of hypercholesterolemia in absence of any clinical symptoms. Moreover, post-transplant immunosuppression or maintenance TKI therapy should be carefully chosen in patients with hepatic GVHD given the hyperlipidemic potential of certain immunosuppressive agents. For example, high incidence of hypercholesterolemia is reported in patients treated with nilotinib, thus either dasatinib or imatinib use is preferred as a maintenance TKI therapy in patients after HCT presenting with hypercholesterolemia [13]. In patients with mild to moderate hypercholesterolemia after allogeneic HCT, we recommend an initial medical management with use of antihyperlipidemic medications. Although statins are the most effective drugs to control LDL predominant hyperlipidemia [14], they frequently can result in elevations of hepatic transaminases and myopathy [15]. Most statins are dependent on hepatic cytochrome P-450 enzyme for metabolism and elimination. Thus, due to their toxicity profile and need for very close monitoring combination therapies with statins and strong 3A4 inhibitors are not desirable in allogeneic HCT recipients who frequently receive azoles or other 3A4 inhibitors [16]. In addition, statins are substrates of hepatic transporter proteins including organic anion transporting polypeptide, which can result in undesirable drug-drug interactions and further limit the use of statins in some patients [16]. Other frequently used anti-hypercholesterolemic medications include fibrates that can help reducing the triglycerides by 30–60% [17]. N-3 polyunsaturated acids (N-3 PUFAs or “fish oils”), including docosahexaenoic acid and eicosapenaenoic acid, like omega-3-acid ethyl esters (Lovaza) are another group of effective agents that can be used to lower triglycerides [17]. These medications can be particularly useful in a setting of sirolimus-induced dyslipidemia or lipoprotein-X mediated hypercholesterolemia, which are characteristically triglyceride-predominant conditions [17]. Other anti-hypercholesterolemic medications include niacin, bile acid sequestrants, and ezetimibe [17]. However, these agents have not been systematically evaluated in the allogeneic HCT population.