Catalysis Research is an international peer-reviewed Open Access journal published quarterly online by LIDSEN Publishing Inc. This periodical is devoted to publishing high-quality papers that describe the most significant and cutting-edge research in all areas of catalysts and catalyzed reactions. Its aim is to provide timely, authoritative introductions to current thinking, developments and research in carefully selected topics.

In this study, we found that adding catalytic cracking feedstock, vacuum gas oil, and naphthenic acids in the amount of 0.005–0.0075% vol. increased the liquid target fractions, i.e., gasoline and light gas oil. The decrease in the yield of hydrocarbon gas at a practically constant degree of conversion of the raw material indicated a small proportion of the reactions of re-cracking of the resulting products. This also indicated the resource-saving nature of the process, allowing a larger amount of gasoline fraction and light gas oil to be obtained, as well as, reducing the amount of coke formed on the catalyst at a constant volume of processed feedstock. 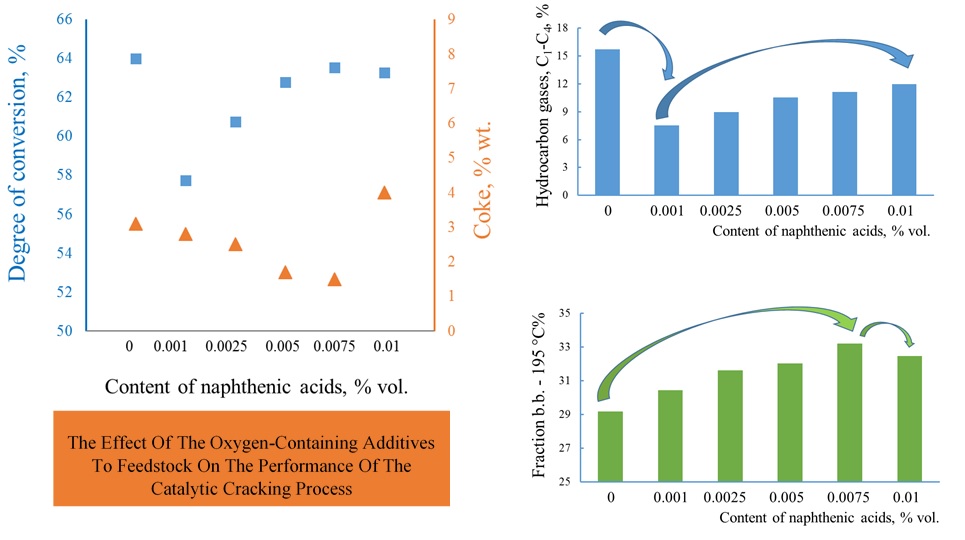 Many laboratory and pilot studies have confirmed the possibilities of intensification of the catalytic cracking process [1,2,3,4,5,6,7,8]. The main ways to improve the technical and economic indicators of catalytic cracking units are as follows:

The mechanism of the transformations that occur under the conditions of the catalytic cracking process is well-studied. The mechanism of most reactions is qualitatively described using the framework of the carbonium-ion theory, which states that the active intermediate particles in the reactions are carbocations. Carbocations might be produced by associative and dissociative mechanisms depending on the type of hydrocarbon, the properties of the catalyst, and the environment. Carbocation formation occurs relatively more easily from olefinic hydrocarbons by an associative mechanism during proton transfer from a protonic acid catalyst to an olefin molecule. However, in traditional catalytic cracking of raw materials, such hydrocarbons are absent and are formed only during the thermolysis of the molecules of primary raw materials or during the addition of special initiators to the composition of raw materials. Carbocations can be formed directly from paraffin hydrocarbons by the dissociative mechanism, i.e., by splitting the hydride ion under the influence of proton or aproton catalysts. However, the formation of carbocations from paraffin is energetically less favorable than the option considered above. Regarding this, the inclusion of activating additives in the composition of raw materials can intensify the reaction process.

The mechanism of action of activating additives can be explained in different ways. For example, one mechanism is based on the confirmation of the ease of formation of carbocations from the proposed additives compared to their formation from the molecules of the original raw material. The best examples of this mechanism include studies where olefin concentrates [9], thermal cracking fractions with boiling temperature limits of 80–350 °C, and gasoline fractions of thermal origin were used as activating additives.

The effect of many known additives can be explained by the mechanism of colloid-chemical action [10]. Most additives based on aromatic hydrocarbon concentrates belong to this type. The introduction of such additives causes an extreme change in the yield of cracking products. Additives based on aromatic hydrocarbon concentrates include the following products of oil refining and petrochemicals: extracts of selective purification of oils, gasoline extract of pyrolysis resin, heavy gas oil of catalytic cracking, heavy gas oil of tar coking, the by-product of oxidized bitumen production, or "black solar", and "reforming resin", which is the condensation product of aromatic compounds of the reforming process. Liquid and solid substances in the finely dispersed state can be used as activating additives. Like additives that contain aromatic hydrocarbons, their effect can be qualitatively described within the framework of the theory of regulated phase transitions. Examples of such additives include the "sludge" of the finely dispersed soot and cracking process. During interphase transitions, the decrease in coke formation on the catalyst and the increase in the yield of the target products can be achieved by adding some surface-active substances and heteroatomic organic compounds to the composition of the raw materials of the process. For example, the researchers in a study [9] suggested using nonionic surfactants, such as oxyalkylated alkylphenol, as activating additives. Several organic compounds with heteroatoms can be used as additives, including petroleum naphthenic acids, humic acids obtained from the oxidation of gray coal, a cubic residue of methanol regeneration, and other compounds. Monoalkylates (a by-product of the alkylation of isobutane with olefins) that are almost completely made up of branched paraffins might also be used as activating additives. When they are added to the raw materials during catalytic cracking, the yield of decomposition products increases because of the ease of formation of carbocations from the existing types of hydrocarbons due to the presence of relatively mobile hydrogen atoms in the triple carbon atoms in their structure. A similar mechanism of action can also explain the cracking of raw materials to which filtrate products, mainly consisting of naphthenes, obtained from the paraffin-oil production process were added.

Catalytic cracking in the presence of oxygen (oxycracking) is a new and promising strategy for the processing of heavy petroleum fractions [5,6,7]. In this process, based on traditional technology, fractions with oxygen-containing compounds can be obtained. This method is important because, in the future, oxycracking products might not only be used as fuel but also as raw materials for petrochemicals. In this study, we investigated the effect of oxygen-containing additives - naphthenic acids on the indicators of catalytic cracking of vacuum gas oil.

In this study, vacuum gas oil (n.k.270-k.k.500 °C) was considered for conducting experiments, as it is the most common raw material used in catalytic cracking installations.

Catalytic cracking was conducted using a flow-through installation in the presence of a zeolite-containing catalyst OMNIKAT at 500 °C and a mass feed rate of raw materials of 4 h–1. The fractional composition of the reaction products was determined by acceleration on the ARN-LAB-03 apparatus. To check the reproducibility of the results, each experiment was repeated five times. By performing statistical tests, we found that the experimental data were reproducible. The experimental error did not exceed 5%.

The influence of different quantities of naphthenic acids on the material balance and indicators of the catalytic cracking process is shown in the table. The increase in the content of naphthenic acids up to 0.0075% vol. decreased the output of hydrocarbon gases С1-С4 and the output of coke (Table 1). The maximum output of the gasoline fraction and light gas oil was obtained in the same interval, i.e., with the content of naphthenic acids from 0.005 to 0.0075% vol. These indicators exceeded those obtained under similar conditions but in the presence of traditional raw materials by almost 4% and 2%, respectively.

Table 1 The influence of the amount of introduced naphthenic acids on the catalytic cracking process.

Table 1 The influence of the amount of introduced naphthenic acids on the catalytic cracking process.

Additionally, the influence of naphthenic acids on the formation of coke on the surface of the catalyst was significant; it changed antibattery to the content of additives.

Introducing naphthenic acids influenced not only the distribution but also the composition of catalytic cracking products. Thus, their introduction in the entire studied interval (0.001-0.01 % vol.) was accompanied by a significant decrease in the output of hydrocarbon gases (maximum decrease at 0.0025% naphthenic acids), mainly due to BBF. Additionally, the change in the ratio of PPF and BPF to the opposite was striking; PPF prevailed in gases in the presence of naphthenic acids (Figure 1). 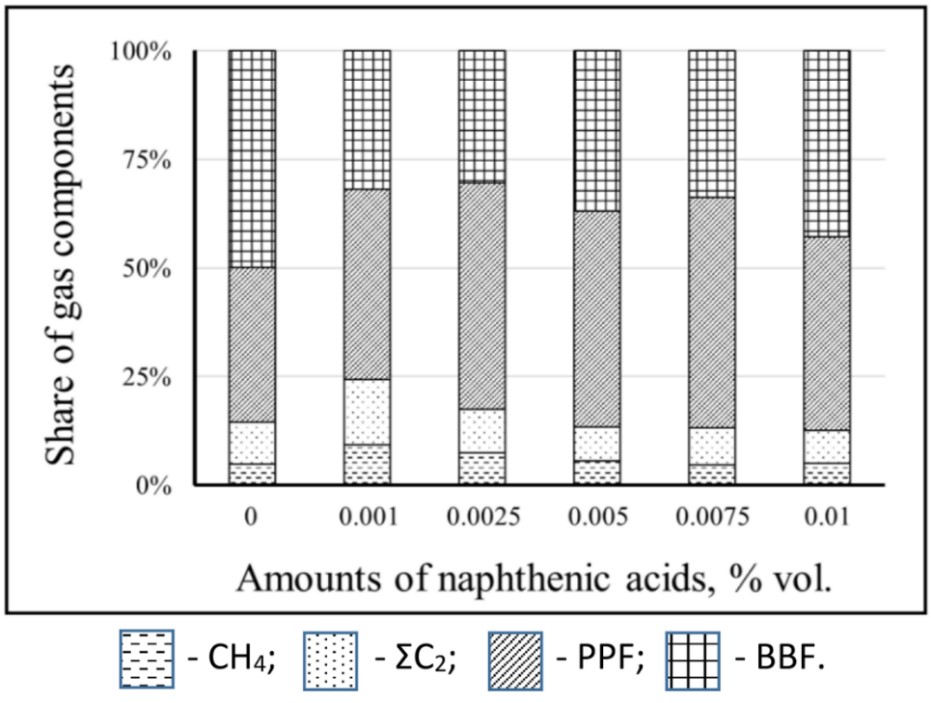 Figure 1 The influence of the quantity of naphthenic acids on the distribution of components of hydrocarbon gas C1-C4.

The drop in the output of hydrocarbon gases was probably caused by the predominance of hydrogen redistribution reactions, which led to the formation of target liquid fractions.

The effect of introducing naphthenic acids in the composition of the raw materials of catalytic cracking on the hydrocarbon group composition of the gasoline fraction is illustrated in Figure 2. The optimal range of the content of naphthenic acids from 0.005 to 0.0075% for the quantitative indicators of the target fractions corresponded to the maximum share of unsaturated hydrocarbons. Also, the gasoline fraction containing up to 0.005% of naphthenic acids was characterized by an increase in the content of paraffin-naphthenic hydrocarbons relative to the sample obtained when using traditional vacuum gas oil. The proportion of paraffin-naphthenic hydrocarbons decreased with the increase in the amount of additives. 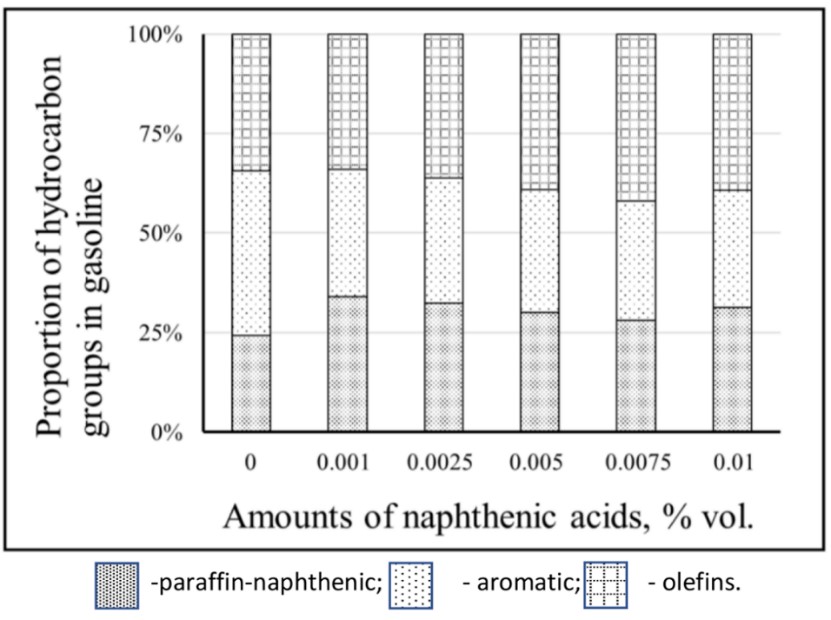 Figure 2 The influence of the amount of naphthenic acids on the composition of the hydrocarbon groups of the gasoline fraction.

The positive effect of introducing naphthenic acids (0.005–0.0075% vol.) into the composition of raw materials might be associated with their promotion effect. Olefins that were formed during the thermal decomposition of naphthenic acids acted as hydrogen acceptors, and paraffins and naphthenes of vacuum gas oil acted as donors. Thus, more carbocations were formed, which were easily and quickly sorbed on the acid sites of catalysts, promoting the hydrogen redistribution reactions. An increase in the content of naphthenic acids (0.01% vol.) had an inhibitory effect, which was caused by an increase in the competitive adsorption of naphthenic acids on strong acid sites of the catalyst due to their greater polarity and relatively smaller molecular dimensions.

In this study, we determined the effect of introducing naphthenic acids into the composition of the raw materials of catalytic cracking (0.001–0.01% vol.) on the distribution of the target products of the process. We found that in the presence of naphthenic acids, the output of hydrocarbon gases С1-С4 and coke decreased by almost twice at certain concentrations: when the additive was added in the amount of 0.001 and 0.0075%, respectively. The presence of naphthenic acids (from 0.005 to 0.0075% vol.) was accompanied by an increase in the output of gasoline fraction and light gas oil, which exceeded the indicators obtained under similar conditions but in the presence of traditional raw materials by almost 4% and 2%, respectively. Determining the distribution of the components in the C1-C4 hydrocarbon gas and the gasoline fraction suggested that the obtained quantitative indicators of cracking might be related to the nature of the reactions.

To receive the table of contents of newly released issues of Catalysis Research, add your e-mail address in the box below, and click on subscribe.